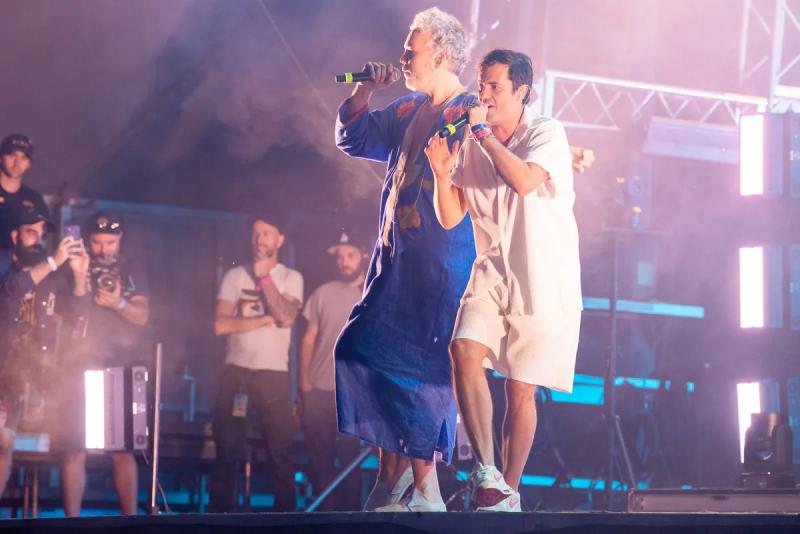 Saturday's daytime lineup at the Osheaga Festival was probably the weakest of the weekend in terms of big hitters. However, festival-goers got no less for their money, especially during performances inspired by Polo & Pan and Khruangbin.

“We wish you an excellent trip! “: it was the French electronic music duo who brought up the rear on the Scène de la Vallée. The catchy pieces by Paul Armand-Delille, alias Polocorp, and Alexandre Grynszpan, alias Peter Pan, had the desired effect on festival-goers.

Even if their reputation is well established on Quebec soil , their skilful marriage of tropical sounds and electro rhythms still surprise by their effectiveness.

Benefiting from the most captivating visual effects and light effects, the duo urged the audience from the outset not to “forget the precious little moments” before delivering a heartfelt interpretation of Feel Good.

Thousands of smiling people, a gentle sunset on the river, good weather: all the ingredients were there to make the Polo & Pan one of the most enjoyable of the festival.

A little earlier in the evening, the Texan trio Khruangbin breathed a psychedelic wind into Parc Jean-Drapeau.

Earlier in the evening, the mysterious Texan trio Khruangbin breathed a psychedelic wind into Parc Jean-Drapeau. He himself has hammered home in the past that he does not deign to be associated with a musical genre, and with good reason: his music imbued with funk, soul and rock is accompanied by very unique sounds.

After releasing three rather groovy instrumental tracks, the group, not very expressive, finally addressed the public by greeting them in French.

Despite the extravagant appearance of guitarist Mark Speer and bassist Laura Lee Ochoa, the trio swear by their music during their performances. It's also hard to look away from the latter, whose style and poise are matched only by her dynamic basslines.

The understated, yet honeyed vocal harmonies of Speer and Ochoa blended beautifully into the soundscape, giving way to soaring guitars and the rhythm imposed by Donald Johnson on drums.

A dose of gangster rap

American rapper Freddie Gibbs launched his verses with ease and assurance this Saturday on the Green Stage.

Hip-hop fans were treated to a performance by Freddie Gibbs, an important figure in American gangster rap. Repeatedly recalling his “love” for law enforcement, the rapper lit up a joint on stage and recounted tales of his troubled past.

You won't see Gibbs sing nice choruses or modify his voice with autotune software. He presents pieces from his acclaimed discography in a raw way, launching his verses with ease and confidence.

Unfortunately, we've already seen a rapper have more chemistry with his DJ on stage, and the sound levels on the Green Stage weren't quite on point. This sometimes interfered with the intelligibility of Gibbs' remarks, who nevertheless showed (a little too often) his ability to rap a capella.

Although it was difficult to navigate through the human pond during the first two days, Osheaga was unable to find buyers for all of its daily passes. The organizers estimate the number of festival-goers on Friday at 40,000, and maintained that there were still several thousand tickets left for the closing day on Sunday.

Inflation seems to have made its way to Île Sainte-Hélène, so much so that in addition to having to pay at least $375 to be part of the whole on the weekend, festival-goers were faced with exorbitant prices at the shops. Big beer at $10.49, tiny hot dog at $6.49, soft ice cream cone at $9.99… many piggy banks have been smashed!

A BELL CENTER FOR ARCADE FIRE

In full performance on the River Stage on Friday, Arcade Fire pleased its already jubilant fans by revealing that it was going to visit the Bell Center, December 3. The Montreal band have started and will end the tour of their new album, We, in Montreal.