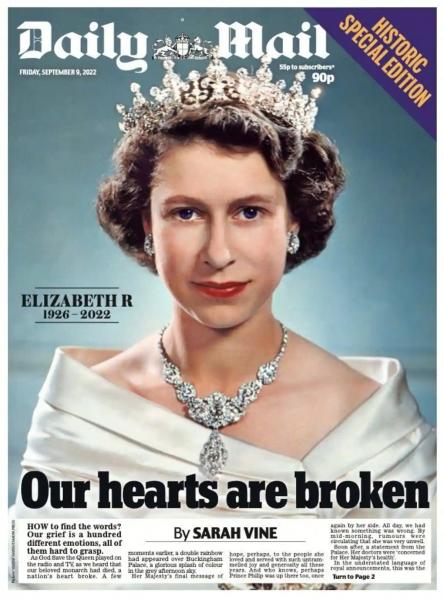 'We loved you Ma'am', 'Our hearts are broken': Photos of Queen Elizabeth II hit the front pages of all British daily newspapers on Friday, with special editions chronicling her 96 years of life and 70 years and 7 months of reign.

“The Times”, “The Guardian”, “The Daily Telegraph” and “The Independent” chose the official image of the 27-year-old monarch at her coronation in 1953, while “The Sun”, “ The Daily Mail” and “The Daily Express” preferred photos of an older Elizabeth II, in black and white or color, but with the same solemnity.

“Grief is the price to pay for love”, title “The Telegraph”, taking up the strong words that the queen had addressed to the Americans after the jihadist attacks of September 11, 2001 in New York (United States).

The love is a theme that comes up very often in the columns of the tabloids. “We loved you Ma'am,” proclaims “The Sun.” “We are proud to have had you as Queen”, he adds, when “The Daily Express” title “Our beloved queen is dead”.

“Our hearts are broken”, also affirms “The Daily Mail”, adding: “How to find the words? Our grief is filled with a hundred different emotions and all of them are painful to grasp.”

“Thank you” also comes up a lot in articles, such as the front page of the “Daily Mirror”.

Unsurprisingly, the death of Elizabeth II gives rise to special editions of several dozen pages dedicated to this historic event, with considerable impact for the United Kingdom and beyond.

“A light has gone from our lives. The day the UK and many around the world have been dreading has arrived. She is gone”, saddens the editorial of the very popular tabloid “The Sun”.

“The mother of our nation. The most famous, most loved, most respected woman in the world. The backbone of the UK. It is simply difficult to think of the life of the country without his presence”, adds the daily. “The new world will seem strange to us.”

In its obituary, “The Times” describes Elizabeth II as “the woman who saved the monarchy”.

“It is thanks to its dedication and its sense of its mission that an institution which has sometimes seemed outdated and unable to adapt to the values ​​of contemporary society still has its relevance and remains popular today”, according to the daily.

In the columns of the left-wing newspaper “The Guardian”, the editorial believes that his disappearance marks the beginning of “a new future”. “The one element in our collective life that consistently and reliably remained the same…is gone,” he writes.

The “Daily Telegraph” also pays tribute to “a life at service' of the United Kingdom. “She was more than an aloof and matriarchal symbol of the nation, she was a constant guide and company, always peacefully reassuring even in the most turbulent times (…) The reign of Elizabeth II is over. Long life to King Charles III”, he concludes.