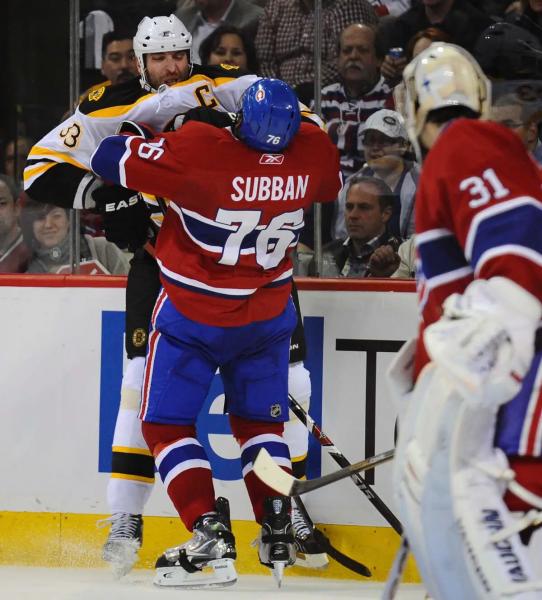 Defenders P.K. Subban and Zdeno Chara are symbols of the rivalry that animated the Montreal Canadiens and the Boston Bruins several years ago, and fate wanted the two men to leave the big hockey scene. the same day.

The announced departure of these recipients of the James-Norris Trophy, awarded annually to the rear par excellence of the National League (NHL), in a way closes the last chapter of the historic Canadian-Bruins, while waiting for the writing of the next episode. Indeed, the two athletes were on the ice when the two teams crossed swords for the last time in the playoffs, in the spring of 2014.

Proof of their influence in the surrounding animosity, their presence on enemy soil never went unnoticed, the TD Garden crowd booing copiously Subban with each puck possession and the Bell Center crowd jeering Chara during practically all his appearances on the ice. /p>

As a matter of giving a nod to these two simultaneous retirement announcements and the links to be made between the two players, here are some notable contributions from Subban and Chara at the time when they proudly represented their team respectively.

Even more than 11 years after the traumatic events of that late winter evening at the Bell Centre, some fans are still marked by Chara's check against Max Pacioretty near the Habs bench. In the second period of a 4-1 win for Bleu-Blanc-Rouge, the number 33 of the visitors literally crushed the striker's head on a barrier near the players' bench; the victim left the ice on a stretcher, having suffered a concussion and fractured vertebrae in the neck.

In the end, Chara was the clear winner in the equation. Pacioretty did not return to play, either in season or in the playoffs. Although the case nearly ended up in court, the defenseman walked away without an NHL suspension and was not criminally charged.

As chance does things sometimes strangely, the Canadian and the Bruins found themselves in the playoffs a few weeks after the incident. The end of the series remains difficult to accept for fans of the Montreal club, which had taken a 2-0 series lead before losing in overtime in Game 7, the result of the decisive goal by Nathan Horton.

If Chara was satisfied with an assist against the Habs, Subban was more effective offensively speaking with two goals and as many assists. In the last game, he notably tied the game 3-3 with a slap shot with less than two minutes left in the third period. Number 76 was also carrying great responsibilities at the time, as Andrei Markov was out with a long-term injury, while the other offensive threat on the blue line was James Wisniewski.

Another source of frustration for Sainte-Flanelle and Subban: their fallers eventually lifted the Stanley Cup, after coming within a goal of being eliminated in the first round by the Canadian deprived of Pacioretty.

The hour of revenge struck three years later for the Glorious, who this time had the last laugh in another match number 7 played at TD Garden. Many remember a few special cases that occurred during the series and even after it… the not very warm handshake between Dale Weise and a menacing Milan Lucic being the obvious example. But to return to Subban, it was in the spring of 2014 that the hatred of some Bruins fans reached its climax.

The defender was thus targeted by racist comments on social networks after counting the winning goal in second overtime of the first game in Boston. However, the Norris winner of the previous campaign did not seem bothered by his critics, as he finished the series with four goals and three assists. In Game 3, played at the Bell Centre, his overjoyed reaction to scoring a goal was widely broadcast on television.

As for Chara, who had 17 goals and 40 points in the regular schedule, he was limited to two assists by the Canadian.