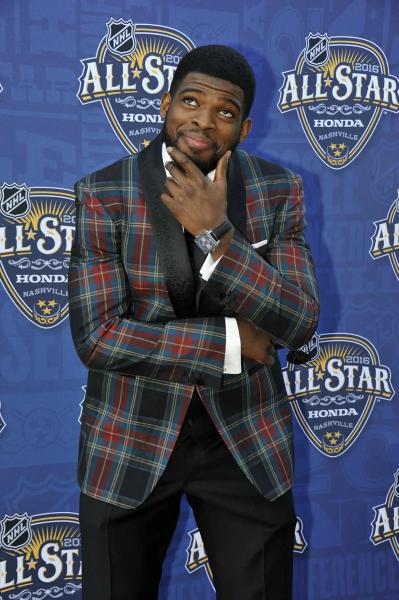 P.K. Subban left a mark on fans for his words and gestures on the rink. He was also talked about for his flamboyant clothes during his social outings.

Over the years, the defender has made the Montreal boutique Sartorialto known all over the planet. She designed more than a hundred suits for Subban.

He became a friend of the store's founder, Mark Patrick.

“We have started working together in 2010, says Patrick during a telephone interview. He has become an ambassador for us. He made us known.

“We could have put millions in advertising, but I'm not sure it would have had as much effect as him with his personality and his charisma. He brought the major American networks to our shop.

“He gave us a showcase that we couldn't afford. We owe him a lot for that.”

Subban knew Patrick by chance in a bar. The athlete gave the Quebec entrepreneur a chance.

“After the first costume, he became addicted, explained the businessman. He was an ideal client for us. He was very open to our suggestions.

“When he went to play in New Jersey, he opted for more subdued colors. Before that, we were far from sobriety. When you put on a flamboyant suit, you get noticed.

“So you have to space out the times when you wear them.”

According to the latest rumors, Subban will be hosting a television show in the next few months. If this is the case, it is not impossible that he will call on the store that has served him well for several years in Montreal.

Before announcing his retirement, Subban called the leaders of the Montreal Children's Hospital Foundation. He reassured them of his intentions for the future.

“He told us how important it was for him to continue our partnership, mentioned the president of the foundation, Renée Vézina, in a written statement. He looked forward to spending more time with our young patients and fundraising on their behalf.

Subban will continue to serve as the foundation's spokesperson. However, it was impossible to know where he is at in his goal to raise $10 million for the foundation. This is what he announced with great fanfare in 2015.