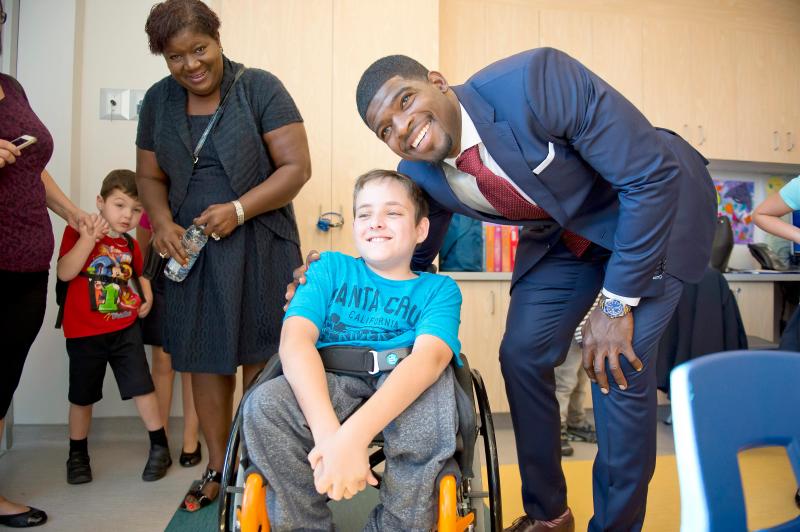 P.K. does he leave hockey on his own or is hockey leaving him? Apparently, no National League team presented him with a contract offer. Which makes his detractors say that he deserved no better. It is the ransom to be paid for someone who leaves no one indifferent. This is the case of Subban. We adore him or we criticize him about everything and nothing.

P.K. has always enjoyed living in the spotlight. He may have been the first NHL player to identify himself as a trademark.

Except that doesn't pass in the conservative world of hockey. He was in the wrong sport for that.

To have been a football, basketball or baseball player in the United States, we would have seen it in hundreds of commercials and we would not have made a case of it.

On the other hand, no one can say that P.K. is a bad boy. On the contrary, man is a silk.

Son of a good family, his parents instilled in him the values ​​of respect and good manners. I have no proof, but I suspect he never said the four-letter word beginning with F.

At least outside the rink. His father, who was a teacher, wouldn't tolerate it.

P.K. is a ball of emotion. He smiles at everyone as he sometimes sheds tears in public.

Let us remember his first game at the Bell Center in the uniform of the Nashville Predators. It wasn't crocodile tears rolling down his face.

P.K. was crying for real.

If he didn't know it yet, he realized that night how much fans loved him, that Montreal was his world. The spectators thanked him with big blows of “we love you!

We thanked him for his performance on the ice, but also for his involvement in the fundraising campaign of the Montreal Children's Hospital.

A month after signing his big contract with the Canadiens, he pledged to pay, in partnership with his foundation, a minimum of $10 million to the hospital centre.

The institution said thank you giving his name to the large square in his building.

In September 2016, I saw him before he left for Nashville, spending hours with sick children. He held each of them that passed in his arms as if they were his own. He cajoled them and made them laugh easily.

Yes, P.K. is exuberant, yes, he could get on his teammates' nerves. Hal Gill let him have nothing when he played with the Canadiens. A wrong move and Subban had the big Hal on his back.

He gave sweats to Guy Boucher, who managed him with the Hamilton Bulldogs, then to Michel Therrien with the Canadiens. But he wasn't mean.

Who is this nerd?

When the Canadiens drafted him in 2007, in Nashville, it was the first time that we saw a hope of the organization put on a show. So much so that journalists from other cities had joined us to see who was this fanatic who was laughing and talking incessantly on the podium.

Shaking hands on his arrival at the table of the Canadian, he had launched to Bob Gainey that he would not regret his choice.

When he came over from Hamilton in April 2010 to replace injured Andrei Markov in Game 1 of the second-round series against the Pittsburgh Penguins, his impact was immediate. Jacques Martin used him for more than 23 minutes.

In 2014, he scored two goals in a 4-3 win at Boston in Game 1 against the Bruins. As he left the rink, he was doused in beer and showered with racist insults.

That was without counting the social networks.

The firm Influence Communication had listed 17,000 hate messages against P.K. which included the word beginning with the letter N.

The next day, the vice-president , communications, of the Canadian at the time, Donald Beauchamp, spoke for the defender, saying: “P.K. says he has no control over it and that all he cares about is the next game”.

He and Carey Price had taken charge of the Bruins.

It is to be hoped that the Canadiens will pay tribute to him one day soon. Here, the New Jersey Devils are in town next Monday.

The opportunity would be great.