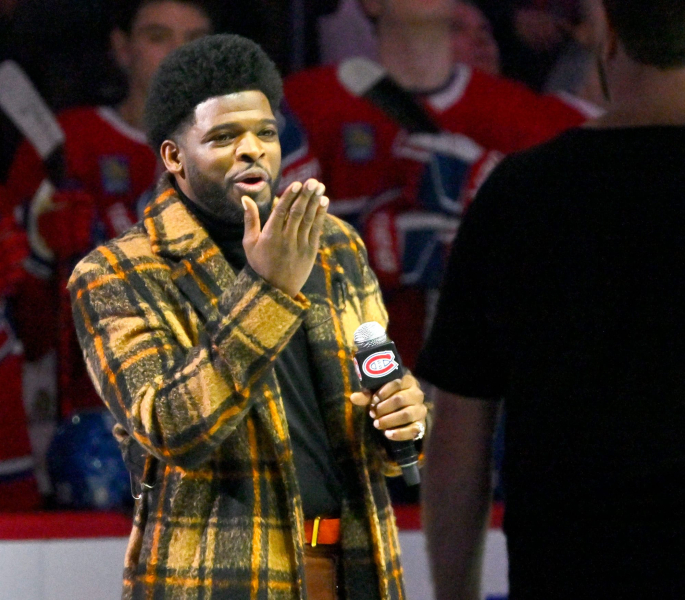 The Canadiens probably played their best game of the season Thursday night against the Nashville Predators. All this at the P.K. Subban tribute night. Coincidence? I don't think so!

True to form, the flamboyant character delivered a touching speech that clearly had a motivating effect for the men of Martin St-Louis. He spoke with his heart about his years spent in Montreal and we really felt the sincerity in his words. Whether we like it or not, we have no choice but to recognize that the former number 76 marked his years in Montreal in his own way. He did it spectacularly, and that's why Canadiens fans still love him so much. He marked Montreal on and off the ice.

What a great idea, too, to bring Carey Price onto the ice at the end of the tribute for a final “triple low five”.

I was watching him on Thursday, and I couldn't help but see in P.K.'s eyes that he appreciated this tribute offered by the Canadian, but that he would have liked above all to do it for one last time, in the blue, white and red uniform.

Because the question arises: at 33 and with a reasonable contract, would the flamboyant defender have done worse than some veterans including Joel Edmundson and Chris Wideman?

I personally don't think so.

I'm sure the idea has come up at one time or another behind closed doors. I wouldn't be surprised if it came from owner Geoff Molson himself, by the way.

I'm imagine, however, that Jeff Gorton and Kent Hughes put emotions aside and made the rational decision to continue the plan started since their arrival. The team has several young defensemen and probably didn't want Subban to take away ice time from any of them.

We must also take into consideration the almost incalculable number of veterans who act as veritable burdens for the organization. We probably didn't want to risk Subban disappointing and joining Mike Hoffman, Joel Armia, Evgeni Dadonov, and so on.

We'll never really know, but I don't think being too far from reality.

In short, this evening ended in the best way for fans, with a victory inspired by the Canadian.

But the Canadian will not be able to count on inspiring speeches from P.K. Subban before each game. It will now be necessary for the players of the team to be able to draw from within themselves the motivation necessary to win games.

And it starts with pride. Recently, we did not feel it, this pride in the Habs. We took the losses and it didn't seem to bother anyone.

Fortunately, I felt that Martin St-Louis wanted to raise his voice lately. I like that.

Even if he understands the situation and knows full well that the Canadiens don't have a team to compete with the best, we felt he was annoyed by the indifference of some of his players despite the defeats. He suffered his first victim on Thursday, leaving Mike Hoffman out.

Unless it's because another team is interested in his services and has asked that he be scratched alignment so as not to injure yourself.

But, allow me to doubt it.

The Seattle Kraken have only been surprising since the start of the season. Thursday night, the newest expansion team not only inflicted its first regulation loss at home to the Boston Bruins, but did so by shutting out their powerful offense led by David Pastrnak, Brad Marchand and Patrice Bergeron. The Kraken now have 25 wins this season, including 15 in 21 road games. There is no doubt that Dave
Hakstol is currently among the favorites to win the Jack Adams Trophy as NHL Head Coach of the Year. Let's not be afraid of words: no one saw them making the playoffs this year. I'm happy for Yanni Gourde, who seems to be having fun with his new team. He had left Tampa Bay somewhat reluctantly after winning the Stanley Cup twice with the Lightning.

WHAT IS EDMUNDSON DOING?

Joel Edmundson was to play a role of mentor with the young defenders of the Canadiens this season, and we have to admit that it is quite the opposite. I hope no one is taking an example from him right now because he is playing badly, very badly. Sometimes it feels like he thinks he's an attacking defender. He takes unnecessary chances and puts his team in trouble. For now, he's being used on the left of another veteran, David Savard, and I wouldn't even be surprised if it was to make sure we didn't mix up one of the young fullbacks in the squad. Rumors send him to Edmonton, but I'm having a hard time understanding what they find in him.

If he maintains his current pace, Cole Caufield will be dangerously close to the 50-goal mark this season. At the moment, he has 25 in his 42 first games and it is quite possible to see him approaching the prestigious mark of 50, a plateau that no Canadian player has reached since Stéphane Richer in 1989-1990. In this lost year, I am convinced that this is a goal for the young number 22 of the Canadian, even if he will never admit it publicly.