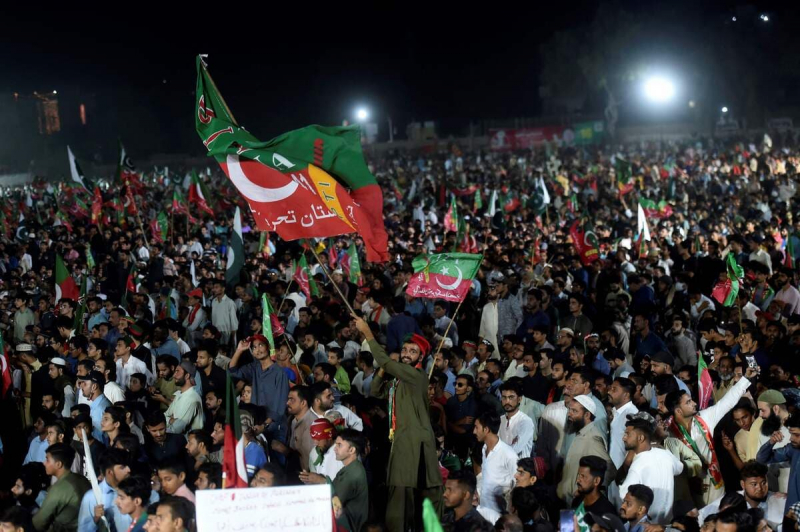 Former Pakistani Prime Minister Imran Khan is running for seven of Sunday's eight by-elections, a poll he sees as a “referendum” on his popularity.

Overthrown by a no-confidence motion in the National Assembly in April, Mr Khan has his eyes on the next parliamentary elections, due to be held by October 2023.

It is possible for a candidate to run for several seats in Pakistan. If he is elected in different constituencies, he chooses the one he will represent as a deputy and a new ballot is then organized in the others.

However, it is rare for a candidate to run for so many seats, and this strategy clearly serves no other purpose for Mr. Khan than to gauge his popularity.

“It is not not just an election, it's a referendum,” he said at an election rally on Friday in Karachi, the great megalopolis in southern Pakistan.

Since April, Mr. Khan has held large rallies across the country, drawing tens of thousands of supporters, to pressure the fragile ruling coalition. He promised to soon announce the date of a new “long march” on the capital Islamabad.

Mr. Khan, who keeps rehashing his thesis that his fall was the result of a “conspiracy” hatched by the United States, relentlessly criticized the government of his successor, Shehbaz Sharif, and demanded early elections.

“If he wins the majority of the seats, it will again testify to the success of the narrative he has built since he lost power, and obviously this will further increase the pressure on the government”, estimated for AFP analyst Imtiaz Gul.

In July, his party, Pakistan Tehreek-e-Insaf (PTI, Pakistan Justice Movement), won a majority in the Punjab Assembly, the most populous province in the country, winning several provincial by-elections by a wide margin.

The former cricket champion has faced several legal proceedings in recent months, including for the moment came out without too much damage.

The country is used to seeing political leaders use the police and the judiciary to muzzle the opposition.

Imran Khan had come to power in 2018, after the victory in the legislative elections of the PTI, on a populist platform combining promises of social reforms, religious conservatism and fight against corruption.

But under his mandate, the economic situation deteriorated and he lost the support of the army accused of having contributed to his election.