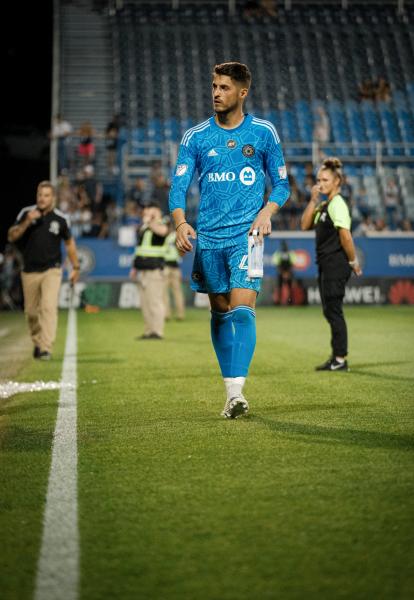 For a few games, we have been witnessing a kind of renaissance for goalkeeper James Pantemis who has regained the position of number 1 and who, above all, is playing with more confidence and aplomb.

The Kirkland native lost his starting job to Sebastian Breza in October 2021 after a tough end to the game in Toronto.

Since then, the Kirkland goaltender The 25-year-old had only played two Canadian Championship games, including a heavy 4-0 defeat in the semi-finals, still in Toronto, last June.

On July 16, Wilfried Nancy chose to give him the team's goal and Pantemis has since played five of the team's six games, in which he is still undefeated (3-0-2).

We can thus praise the patience of Pantemis who did not let the defeat against Toronto bring him down.

“I don't wouldn't say I'm relieved because there's still a lot of work to do.”

“Of course it was difficult to lose 4-0, but also against Toronto, but I know that in this business there are changes, whether it's an injury or a red card. You just have to be ready for the opportunity.”

It's easy to think that the last few months have been a purgatory for the young goalkeeper, but he doesn't see the situation the same way.

“For me, it was an opportunity to work on things that I wanted to improve. I didn't see it as a waste of time.”

“I wanted to work on my game on the pitch, but also off the pitch. I did strength work in the gym with the physical trainers. I feel that I have worked well and I want to have fun.”

Wilfried Nancy has the gift of making decisions that pay off and that to put Pantemis back as starter is just the latest in a long list.

“I feel he is good, I want a team that is brave and he is, supported the head coach Thursday noon. But I don't forget Sebastian because in Columbus he had a great game. If he doesn't make the saves, we don't win the match.”

The team's two goalkeepers are young and Nancy doesn't hate it when they compete for minutes.< /p>

“I like to see my two goalkeepers who are able to compete. I have already said that I like having a first goalkeeper and a second.”

“It was not under pressure from the media that I decided to compete, it was because that I felt that and I think it's best for everyone even though I'm not a big fan of it.”

Don't think that this internal competition is undermining the relationship between the two young men.

“We get on very well well together, we've known each other for years so for me, it doesn't change anything. I'm concentrating on the task given to me by the coach.”

Nevertheless, seven months passed between his last start of the 2021 season and the team's first Canadian Championship game, in last May. It's not easy mentally, but Pantemis remains stoic.

“I would say the goalkeeper position is one of the toughest mentally. For 89 minutes you can't touch the ball and in the 90th I have to make a save to save the team. It's in my head and I have to stay focused.”

“You have to find ways to stay positive in order to want to keep working. I stayed strong and solid. I had no doubts, it's my job and I chose it. I am “all in”.