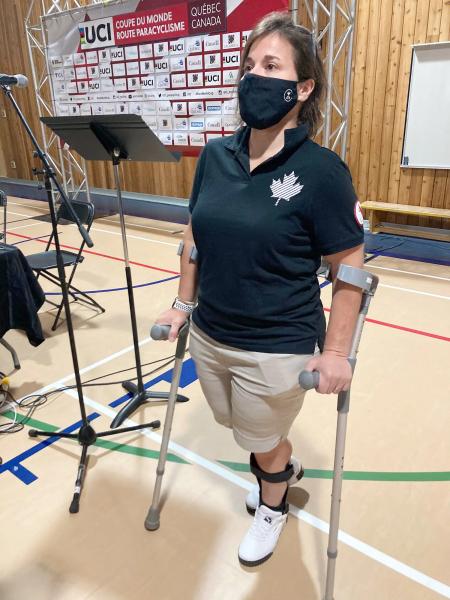 Marie-Ève ​​Croteau saw her dream of competing in the streets of her neighborhood die this weekend when a bacterium attacked her lungs a few weeks ago. But the experienced para-cyclist still has an excellent reason to rejoice: she is still very much alive.

“It was serious, I out of breath,” says Croteau, who has competed in two Paralympic Games. It happened right after the Canadian Championships in Edmonton. At the hospital, they saved my life.

“My larynx was damaged, she adds, so the doctors told me that it was impossible for me to take part in competitions until the end of the season. “

< p>It is therefore from the sidelines that the Charlesbourg native will attend the UCI Para-cycling World Cup starting today, in which 300 athletes from 35 countries will take part (see other text below).

“It really happens in my house. I grew up at the Arpidrome, I live two minutes from here. It's a dream I thought I would realize, but I'm going to push hard so that the event is back next year, says the 43-year-old athlete.

Croteau has gone through great hardships throughout his life. Hit by a drunk driver when she was a teenager, she then had to fight off flesh-eating bacteria.

A concussion caused her to miss the London Games, then her adapted bikes were stolen a few days before those of Rio.

But the elite para-cyclist, double world champion in 2011, 2012 and 2013, refuses to let this new challenge sound the death knell of her career.

She has already resumed training in the gym – at a moderate – and is waiting for his larynx to be fully recovered to get back on his bike, with the goal of the Paris Games in two years.

A bicycle as a gift

During this forced break, she is involved in the organization of this World Cup which will be held in her backyard.

But this time, the appointment is not is not purely medical.

“I said to the doctor: you really saved my life. I bought him a tiny little time trial bike and I'm going to meet him to bring him. »

From today until Sunday, elite paracyclists will battle for victory in the streets of Charlesbourg. Several routes have been designed, particularly near the Arpidrome or around the lands of the Sisters of Charity.

The 300 cyclists will be divided into four categories: tandem, hand bike, tricycle and regular bike, with or without adaptation.

time trials, relays and road races are on the programme.

« With the number of athletes present, it is the equivalent of a World Championship  ”, points out Louis Barbeau, general manager of the Quebec Federation of Cycling Sports.

“ The descent to Bourg-Royal, it’s going to roll! adds paracyclist Marie-Ève ​​Croteau, who specializes in tricycles. In my opinion, the tandems will go for 90, 100 km/h. It's impressive! »

Originally from Victoriaville, Charles Moreau will take part in the handcycling events.

He likes the course of Charlesbourg, which comes to seek his strength.

The asphalt of certain portions of the course was also redone after the visit of Mayor Bruno Marchand.

Bronze medalist on the road at the Paralympic Games in Rio, Moreau is obviously delighted to compete in a race not far from his home.

Several of his relatives are expected on site, as is the mayor of Victoriaville, Antoine Tardif.

But the 40-year-old athlete also wants to send a message to the people of Quebec.

“Come see this, he said. People don't suspect what we are capable of. It's an eye-opener, this kind of event. Sometimes we go through hardships in our daily lives. It allows some people to motivate themselves to get through theirs.”

“ It’s a lesson in life, adds Marie-Ève ​​Croteau. To see a person who has no legs climbing a hill at 40 km/h is tough. It tells people to get out of their homes and get moving, no matter what their disabilities or difficulties. ”