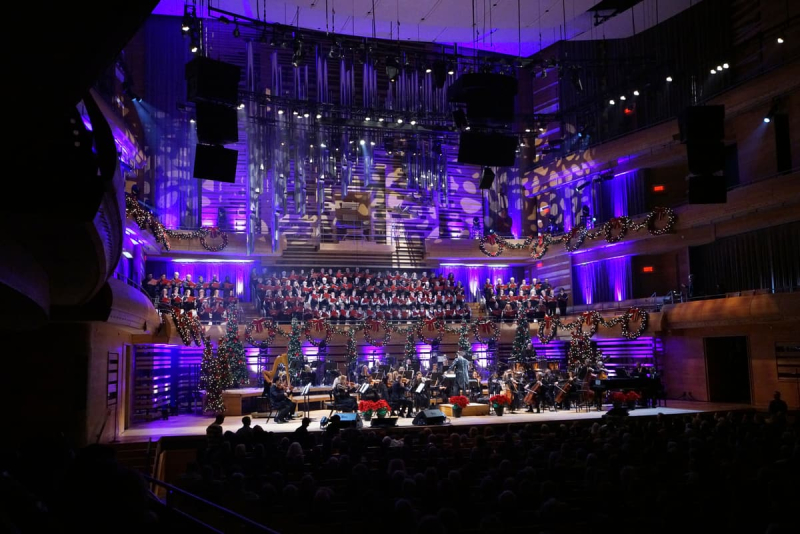 Roch Voisine and Guylaine Tanguay wowed the visitors on Tuesday evening when they received at the Maison symphonique de Montréal for their holiday concert “Parapapam”.

They were accompanied, for this musical evening – which had a certain magical character – by violinist Alexandre Da Costa and the Orchester symphonique de Longueuil (OSDL), which he has been conducting since 2019, by the Quebec soprano of Italian origin Giorgia Fumanti and of the baritone – also an actor (“The Empress”) – of Georgian origin Vladimir Korneev.

Together, in duo or trio, and solo, the artists revisited some of the greatest classics of the holiday season, including “Happy Xmas (War is over)”, “Feliz Navidad” and “Have yourself a merry little Christmas », playing as much with pop music as with their respective styles. Classical interludes, including “Adeste Fideles” and “Le petit concerto pour Carignan d'André Gagnon” – for which the public rose to applaud – were also presented at the Maison symphonique on Tuesday.

The hosts of the evening opened the duo concert on “The snow path” – where some slight synchronization problems could be heard. The guests for their part presented moving versions of the pieces “The Prayer”, “Ave Maria”, “Minuit Chrétien” and “Amazing Grace” – for which Alexandre Da Costa offered an impressive violin solo for which he also received a standing ovation.

On the stage adorned with garlands and verdant wreaths, a dozen sparkling fir trees and scarlet poinsettias, in addition to the OSDL, 125 choristers, including the Petits Chanteurs du Mont-Royal, under the direction of Frédéric Vogel in charge of the choirs.

The public could not hide their enthusiasm during the rhythmic presentation of the piece “All I want for Christmas is you” by Guylaine Tanguay, clapping their hands almost all along the sequence which also combined “Rocking around the Christmas tree”. The country singer, also offered “Christmas is love”, and “The child with the drum” in duet with the little Mattenzo Da Costa, the son of the maestro.

For his part, Roch Voisine, who sang for the first time in front of an audience at the age of 7 during midnight mass, performed “Mon premier sapin blanc”, “Sainte nuit” on acoustic guitar and “Please come home for Christmas ”.

“Parapapam” is presented until Friday at the Maison symphonique de Montréal.