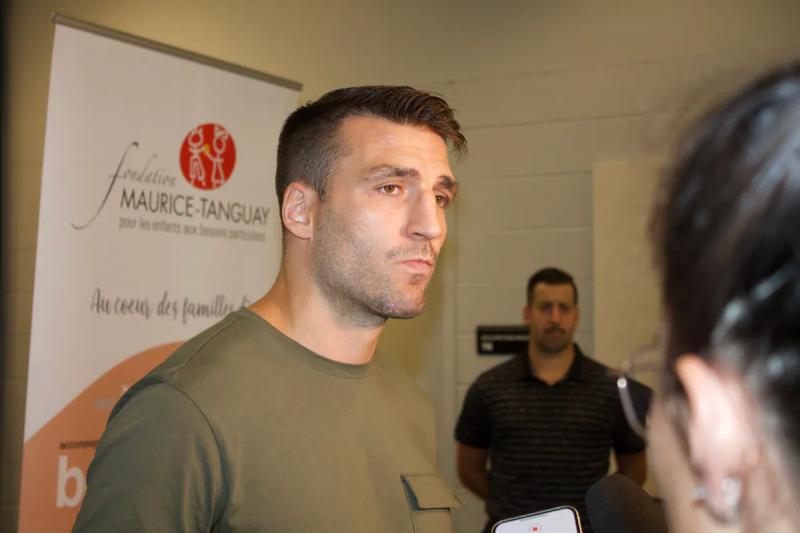 The announcement of Patrice Bergeron's return to the Boston Bruins was welcomed by the players present at the 12th edition of Pro-AM Gagné-Bergeron, Tuesday evening, at the Videotron Centre.< /strong>

On the sidelines of the charity event, which raises funds for four organizations helping sick, disadvantaged or special needs children, more than 20 NHL players were there. Many were delighted with the return of Patrice Bergeron for a 19th season. On Monday, the Bruins forward agreed to a one-year contract extension worth $2.5 million, but could earn up to double that amount through performance bonuses.

Pierre-Luc Dubois dodged the question with a smile when reporters asked him if he would like to play again with Montreal Canadiens defender David Savard. However, when asked about Bergeron, Pierre-Luc Dubois was more talkative.

“I was a 'fan' of him when I was younger, said the Winnipeg Jets forward. […] When I saw his signature, the “fan” in me was really happy to see that. As a competitor, you want to play against the best and Patrice belongs to this category.

“If you are not physically and mentally ready against him, it will not go well, continued Dubois. He is so smart on the ice […]. He knows where I'm going on the ice even before I make the decision.”

Simon Gagné, who organizes the event with Bergeron, also had good words for the Bruins veteran.

“I hope other players will do like Patrice in the coming years,” said Simon Gagné. He decided to take less money to give more to other players and have a competitive team. It shows the quality of his person and his leadership. The last person to take a pay cut like that was Martin Brodeur. It shows the class of Patrice.”

As for the Pro-Am, the former Philadelphia Flyers forward highlighted the quality of the programming and the collaboration of the athletes. Jack Eichel, Pierre-Luc Dubois and Jonathan Huberdeau were just a few of the big names present.

“The players help us a lot. David Savard and Jonathan Marchesseault have made a big difference this year in attracting players, added Gagné. […] It's the best line-up we've had since the start of the Pro-Am.”

Patrice Bergeron was grateful for the good comments from his compatriots about him.

“It's flattering to hear comments like that,” said Bergeron. There's a camaraderie in hockey and it's special to be a part of that.”

“I'm really excited and happy to be back […] It's been a decision that I took the time to mature. The answer came to me by itself.”

In Laval or Montreal, Harris is ready for the challenge

After playing 10 games with the Montreal Canadiens last season, defender Jordan Harris wants to play an important role next year, whether in Montreal or with the Laval Rocket in the American League.

Harris has accepted Patrice Bergeron's invitation to take part in the 12th edition of the Pro-Am on Tuesday at the Videotron Centre. During his meeting with the media, the defender said he was ready to take up the challenge that will be offered to him next year.

“I hope to play a lot, that's the goal,” he said. I was playing big minutes with Northeastern University. I will do my best. Whether I play 10 or 15 minutes in Montreal or Laval, it will be an honor for me.”

“What I went through last year makes me hungrier and more excited for the year next,” he added.

Even if he did not attend the last National Hockey League draft in Quebec metropolis, Jordan Harris is excited about the arrival of Juraj Slafkovsky, the first choice overall.

“Even though I wasn't there, you could feel the excitement of the fans,” he said. […] I haven't seen him play a lot, but he sure has a special talent and the players are excited.”

For his part, goalkeeper Samuel Montembeault, who was also at Pro-Am, studied Slafkovsky more during the World Championship. He can't wait to see the new power forward at work.

“We are rebuilding, but we have good young people who are growing, noted Montembeault […]. I've seen Slafkovsky and I'm really looking forward to facing him in practice.”

Dadonov: 'My kid could have done as well'

< p>Invited to comment on the new acquisition of the Habs Evgenii Dadonov, Jonathan Marchessault underlined the offensive touch of his former teammate, while allowing himself a little humor.

“He is a guy who makes honest work. He has good offensive production, but for sure when he played with Barkov and Huberdeau [in Florida], I think my 8-year-old could have done well with those two guys as well,” said Marchessault with a smile.