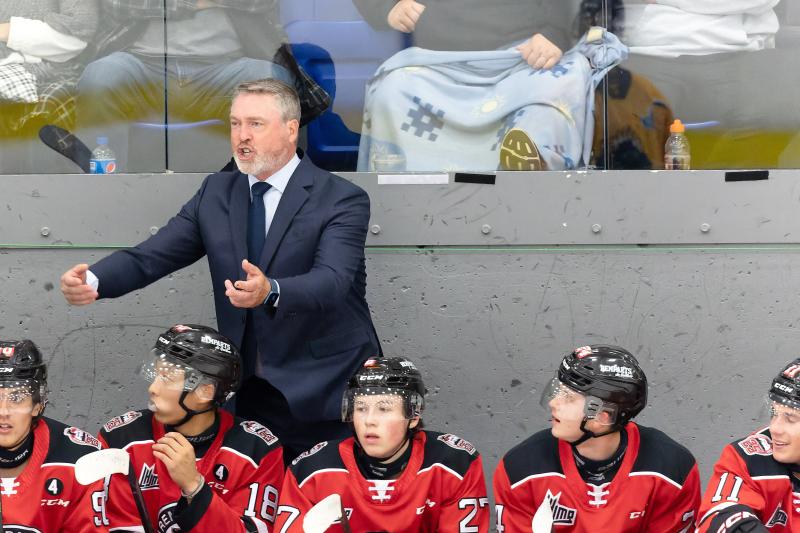 It was just a preseason game, between the Remparts and the Shawinigan Cataractes, which were quite different from the two teams that faced each other in the QMJHL semi-finals a few months ago. Clearly, however, there were still hints of the controversial end of the series that had crowned the Cats.

A little on the ice, yes, since we were treated to a physical game that the Remparts won on account of 6 3. But it was more the relationship between Patrick Roy and the officials that caught the eye.

Recall that when he announced his return behind the team bench, Roy had openly criticized the work of the QMJHL refereeing director, Richard Trottier.

“It's clear in my head that we need a change,” he pleaded.

Coincidence or not, the QMJHL sent Nicolas Dutil and Olivier Gouin to officiate the match of Saturday. Dutil had a run-in with Roy in Game 4 of the series against Shawinigan last season and Gouin was the one to call the penalty on Vsevolod Komarov late in Game 5, leading to Pierrick Dubé's winning goal which propelled the Cataractes to the final.

The cocktail was in place, and it didn't even take a period for it to explode.

Dissatisfied with a no-call obstruction in the defensive zone on Nathan Gaucher, late in the first period, Roy let his way of thinking be known to Dutil who immediately expelled the head coach of the Red Devils who then continued to yell at the referee before leaving. There were 39 seconds left in the first period.

“As I have told my players, I consider that I do not have the same treatment as other coaches across the league. That's why I try to talk as little as possible during matches. […] I found it funny on the part of the league to put them against Shawinigan, in an exhibition game. They were tactless.”

Roy later admitted that the pill of last year's defeat had been hard to swallow and maybe it wasn't. ;completely.

“Maybe it's me who's going to have to do a mea culpa, that I look in the mirror and figure out a way to digest it. It was going well until then, but when I saw them on the ice, I had a hard time understanding. Maybe I didn't have the right attitude when I left, maybe I should have put that aside, but that's not the type of person I am. ”

“In my good years, the rackin hockey would have flown. Today, I try to stay calm. I will have to go over it. Maybe it will have done some good, what happened tonight. »

Besides, note that Nicolas Dutil also imposed ten minutes of misconduct on Nathan Gaucher in third, after he criticized a penalty to his teammate Charles Savoie.

But hey, there was also a game on Saturday, which the Red Devils won by a score of 6 to 3 over the Cataractes.

A few days before leaving for the Philadelphia Flyers camp, Théo Rochette had fun with two goals and three assists in the victory.

Defender Vsevolod Komarov also distinguished himself with a harvest of four assists.

In addition to Rochette, Kassim Gaudet, Zachary Bolduc, Frantisek Ridzon and Pier-Olivier Roy scored for the Remparts while Mathis Cloutier, Alexis Bonefon and Brett Yuzik scored for the reigning QMJHL champions, who will present a very different face in 2022-2023.

“We could have been better. It was a messy match and it was all over the place. I think we're not going to hide it, we're better than them and we'll have to do a better job against teams like that to play safer with the puck and be better defensively,” mentioned Rochette.

►The Remparts will play their last preseason game next Friday, against the Rimouski Océanic. The match will be presented at the Colisée Béton Provincial in Matane.