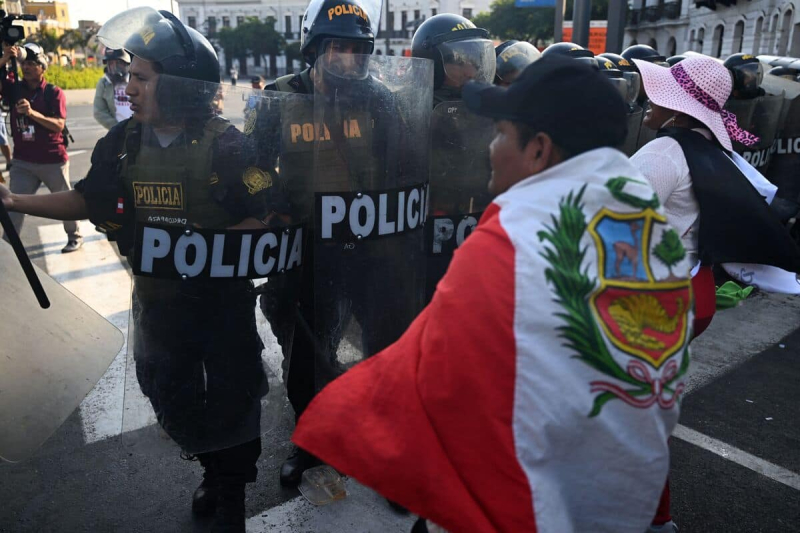 In the afternoon, hundreds of demonstrators, many of whom came from the poor Andean regions last week, again pounded the pavement in the city center, chanting “Dina murderer” or “Dina the people repudiate you”. .

The police fired tear gas to disperse the crowd, but the procession reformed and continued its march, supervised by the police, noted an AFP journalist.

Some were waving flags in the colors of Peru, red and white, but others had replaced the white with black, as a sign of mourning.

Edmunda Canaguira, 60, came from Sicuani in the region of Cuzco last week. “We urgently need Dina to resign,” she said, dressed in the traditional way, with a straw hat and a colorful Andean-colored shawl.

“We will demand until the last day that she resign. She doesn't listen to people. We have been on the streets for a week, without food, without sleep”.

A large rally is to be held on Tuesday, called by several parties and unions. The secretary general of the General Confederation of Workers of Peru (CGTP), Geronimo Lopez, spoke of “a peaceful national mobilization”.

“We reject any act of violence and any act that goes against public or private entities. Those who create chaos and destruction are people infiltrated by the government,” he said.

Protesters demand the resignation of President Dina Boluarte, the dissolution of Parliament and the constitution of a Constituent Assembly.

The demonstrations “will continue, and we are working intensively with the Minister of Defense”, acknowledged in the morning the Minister of the Interior Vicente Romero, while the state of emergency is in force in the key regions of the country. and that protest movements are prohibited there.

He also considered that the country was experiencing “one of the highest levels of violence since the 1980s” and the armed conflict between the authorities Peruvian women and the revolutionary guerrillas of the Shining Path and the Tupac Amaru Revolutionary Movement.

The Minister once again denounced the “funding of the demonstrations” by “a minority group” which “does not show its face”, deploring the approximately 540 police officers injured. The authorities have repeatedly accused the demonstrators of being “ manipulated” and financed by drug traffickers and/or illegal mining.

Praising himself of the “professionalism” of the police, he defended police interventions when they are criticized by civil society or abroad.

During the night from Sunday to Monday, the authorities released 192 of the 193 people arrested on Saturday at the university without Marcos, where they were staying so that they could take part in the demonstrations.

Several local media and civil society voices had denounced this controversial operation carried out by police officers who burst onto campus, conducted vigorous searches and forced protesters to lie down facing the ground.

The unrest began on December 7 after the impeachment and arrest of left-wing President Pedro Castillo, accused of having attempted a coup to dissolve the Parliament which was about to oust him from power.

The crisis is also a reflection of the huge rift between the capital and the impoverished provinces that backed the Native American President Castillo and saw his election as revenge for what they feel was Lima's contempt. Thousands of protesters from impoverished Andean regions arrived last week to demonstrate.

As of Monday, 83 stretches of road were still blocked by protesters in eight of Peru's 25 regions.

In the region of Ica (about 350 km south of Lima), protesters attacked agricultural estates belonging to large exporting companies.

The airports of Arequipa and from Juliaca, in the south of the country, remained closed on Monday, said their operator, Aeropuertos Andinos del Peru. Just like the tourist jewel of Machu Picchu which has not welcomed visitors since Saturday.

“The citadel is closed until this issue (the protests) is resolved. The railway line is interrupted, there is no way for tourists to get there. Now we are only ensuring the maintenance and conservation of the heritage that must not stop,” Zenobio Valencia, head of the Machu Picchu Archaeological Park, told AFP.