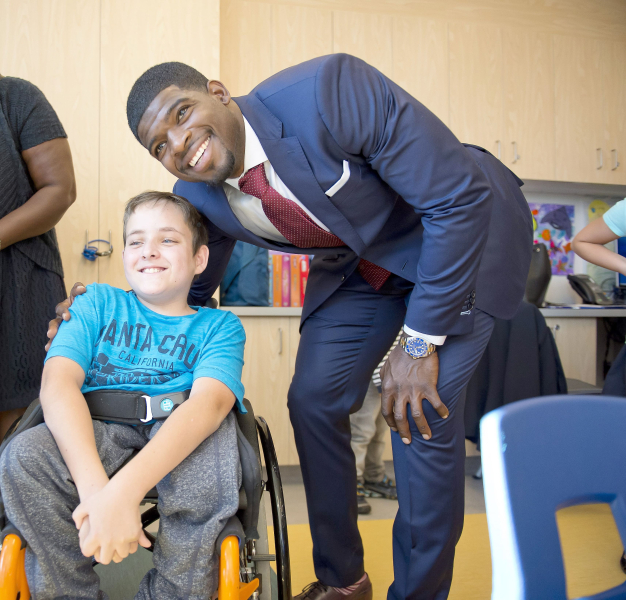 By reading the official documents announcing the commitment of P.K. Subban, the experts polled by our Bureau of Investigation for 10 days question the strategy and the choice of words which deviated from the principles of the agreement.

They believe that the words used are the work of publicists and public relations professionals, and some points should have been clearer.

What do we remember about that day on September 16, 2015 in the crowded new P.K. Subban Atrium at the Montreal Children's Hospital? The $10 million donation announced by the athlete and defender of the Canadiens.

The words used in official French-language documents are clear. Both the hospital foundation and the donor still use it in their publications.

“Montreal Canadiens defenseman P.K. partnership with the P.K. Subban Foundation, a minimum of $10 million to the Montreal Children's Hospital,” read the official statement.

According to the Larousse dictionary, “commitment is the act of promising something, by convention or contract”.

For its part, the P.K. Subban Foundation describes commitment as follows: : “In September 2015, P.K. Subban donated $10 million to the Montreal Children's Hospital…”

This statement suggests that Subban was giving the money when he was not.

“We can greatly influence perceptions with words, points out Christian Desîlets, professor of communication at Laval University, without questioning the generosity of Subban. In the formulation, he engages. For ordinary mortals, committing and paying are the same. In spirit, it's done. The $10 million is donated.

“Obviously, the public relations operation surrounding this announcement makes him accountable to the public. »

Yesterday, following our questions, Subban corrected the amount by announcing that it had reached $6.3 million.

However, until then, the official financial information showed something else. The public registers (official press releases, annual reports and tax declarations) consulted by our Office of Investigation show $3.28 million remitted to the Foundation since 2015.

“It’s a commitment. Now, it is necessary to know if all the terms of this one are respected. In this specific case, the focus is on the $10 million. »

For the sake of transparency, as Subban made this donation publicly, Professor Desîlets believes that both parties could have provided public follow-ups on the money donated over the course of the partnership or at all. less, a balance sheet, when the period ended in September 2022.

“There, we have the impression that the donor is trying to take advantage of a donation without setting the record straight. ”

According to a philanthropic source who requested anonymity, someone should have sounded the alarm.

“Subban did it to recognition since his gift is not anonymous. According to the financial data available, it would be at 30% of its objective. It's embarassing. He wants to help, but in the process he played for himself. There he got caught. »

An agreement like the one between Subban and the Montreal Children's Hospital Foundation is negotiated under the terms of a written bilateral contract . It shows the amount of the donation, the period, the payments and the visibility.

“There are commitments with an amount ringing over a period and commitments according to money and efforts generating $10 million. In the case of Subban, the modulation in the vocabulary used suggests that he gave $10 million personally when this is not the case,” explains this source in the financial field.

In seeking answers to our questions about this $10 million donation from former Canadiens defenseman P.K. Subban, both the direction of the Montreal Children's Hospital Foundation that the athlete's clan pleaded confidentiality of the information of the agreement.

A sum that he did not pay in full according to the terms announced with great fanfare.

According to Christian Desîlets, professor of social advertising at Laval University, the Hospital Foundation and P.K. of transparency. They wish to obtain the butter and the money for the butter without rendering accounts.

“It's very delicate to criticize a foundation that helps children. But you have to do it on the principle that you don't want people to use foundations to improve their image without honoring their promise. In this case, the whole charity system collapses. Which would be unacceptable, ”says the specialist in social causes. Philanthropy: misleading words ” />

“Philanthropy is a colossal field that relies on generosity,” he continues. Foundations have moral obligations to respect, including transparency. It is public morality. Major donors should be seen as such. »

To this end, it is important to emphasize that among its fundamental values, the Hospital Foundation states that it acts with integrity and is accountable to its partners. She has not made any updates since August 31, 2016, when she previously announced that she had raised $1.4 million from the athlete.

Mr. Desilets recalls that the two parties organized a major press conference to announce the largest donation by a Canadian athlete.

“From the moment you make it a public act and 'we refuse to answer questions, because we treat it like a confidential gift, there is a dissonance,' he explains.

In writing, the Hospital Foundation is defended by answering this question according to the minimum requirements provided for by law.

“We hold an annual general meeting and make public our annual reports and financial statements each year”, indicated of public relations, Lisa Dutton.