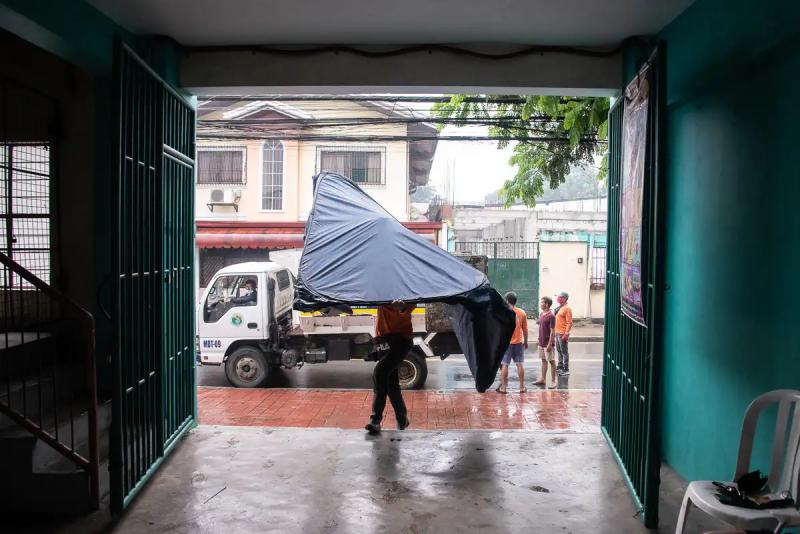 Super Typhoon Noru began to hit the Philippines on Sunday, raising fears of flooding and crop destruction, and prompting thousands to evacuate their homes.

The super typhoon has started to inflict strong winds and heavy rains on the heavily populated main island of Luzon. Noru made landfall at 5:30 p.m. local time (09:30 GMT) in the municipality of Burdeos on the Polillo Islands, which are part of the province of Quezon.

With winds of 195 km/h, Noru, called Karding in the Philippines, is the most powerful typhoon recorded this year in the country. It strengthened with “unprecedented” rapidity according to the National Weather Service.

The Philippine Meteorological Service issued an alert on Sunday evening for “severe flooding” in highly exposed and vulnerable areas of the capital, Manila, and nearby provinces.

“The winds were strong this morning,” said Ernesto Portillo, 30, working as a cook in the coastal town of Infanta, Quezon province.

“We are a little worried, a- he added. We put our belongings in safety and we went shopping to have food in case of need.

The Philippines is hit by about 20 typhoons each year, a phenomenon which tends to increase. worsen due to climate change, say scientists.

Nine months ago, another super-typhoon killed more than 400 people in the center and south of the country.

A typhoon is called a “super-typhoon” when its winds exceed a certain speed , the threshold varying according to the national meteorological services (in the Philippines this threshold is 185 km/h).

“Typhoons are like engines, they need fuel and an exhaust to run,” Gile explained.

According to him, Pacific-born Noru “has good fuel because it has plenty of warm waters along its path, and it has good exhaust in the upper layers of the atmosphere. That's a recipe for explosive escalation.”

According to the weather service, wind speeds could reach 205 km/h on land.

The service warned of flooding, landslides and strong waves in the affected areas. Schools will remain closed on Monday and maritime traffic has been suspended.

In the typhoon-hit Manila region 100 km northeast of the capital where 13 million people reside, mandatory evacuations were underway in a few high-risk areas, including slums along rivers.

“I evacuated the house where I live because I'm afraid of the rapid rise in water,” Gloria Pérez, 68, told AFP. roofs of a basketball court. “I've been through this before and I don't want to go through it again.”

Dozens of flights to or from the Philippine capital were suspended on Monday.

More than 8,300 people left their homes ahead of the typhoon, including residents of several townships in Quezon province, authorities said.

In neighboring Aurora province, residents of Dingalan township were also sent to shelters.

“People who live near the coast have been told to evacuate. We live far from the coast so we stayed. We are more worried about the water coming from the mountains,” said Rhea Tan, 54, a restaurateur in Dingalan.

The typhoon is expected to weaken as it passes over Luzon Island, before heading away in the South China Sea on Monday towards Vietnam.