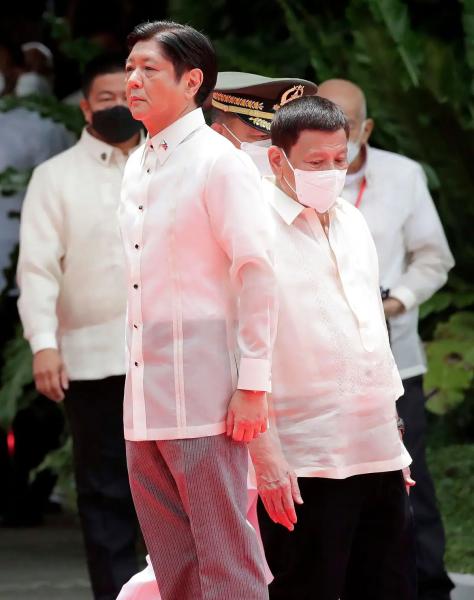 The son of former Philippine dictator Ferdinand Marcos was sworn in as president on Thursday, marking decades of his family's effort to re-establish himself as leader of the country after being ousted from power by a popular revolt in 1986.

He has sworn in in a public ceremony at the National Museum in Manila, in front of hundreds of local and foreign dignitaries, including Chinese Vice President Wang Qishan.

Under the eyes of his mother Imelda, 92, seated a few meters away, Marcos Jr praised the reign of his father, the ex-dictator who ruled the archipelago for almost three decades.

“I once knew a man who saw how little had been accomplished since independence. He made them happen,” said Marcos Jr, saying his father built more roads and produced more rice than all his predecessors put together.

“So will his son. I will not find excuses”, he assured.

More than 15,000 police, soldiers and coastguards were deployed in the capital for the inauguration.

The latest attempts to disqualify Marcos Jr from the election and prevent him from entering in office were thrown out by the Supreme Court days ago.

As rising prices squeeze an economy already ravaged by COVID-19, Marcos Jr has made inflation-fighting , boosting growth and increasing food production its priorities.

He took the initiative to appoint himself Secretary of Agriculture to carry out the reform of this sector plagued by many problems.

But he gave few details on how he intends to achieve his goals and few clues about his style of governance, having largely avoided media interviews.

He made no secret of his admiration for his father and his way of administering the country, portraying the era as something of a golden age for the Philippines, which sparked fears he was seeking a similar regime. .

Pro-Duterte commentator Rigoberto Tiglao recently wrote that he was optimistic about an “economic boom” under Marcos Jr, pointing to the presence of “accomplished academics” in the economic team of the new president and the support of “powerful tycoons” who will be able to advise him and provide him with financial support.

Marcos Jr was brought to power through a massive disinformation campaign on social media, portraying the family in a favorable light and ignoring the corruption and human rights abuses committed during his father's 20-year rule.

“Friend of all, enemy of no one”

The alliance with Duterte's daughter, Sara, who obtained the post of vice-president, was essential to the success of Marcos Jr, as well as his wife, Louise.

Marcos Jr has also pledged to defend the rights of the Philippines to the South China Sea which Beijing claims almost entirely.

Unlike his predecessor who moved away from the United States towards the China, Marcos Jr has indicated that he will pursue a more balanced relationship with the two superpowers.

He said last month that he would adopt a “friends of all, enemies of no one” foreign policy. but insisted he would enforce an international decision against Beijing over the resource-rich South China Sea.

Although he supported Duterte's war on drugs, which has killed thousands of mostly poor men, he is unlikely to implement it so aggressively.

“I think the Filipino political elite is ready to give up the war against drugs guided by violence,” said Greg Wyatt, director of business intelligence at PSA Philippines Consultancy, adding that it had “attracted enough negative attention”.