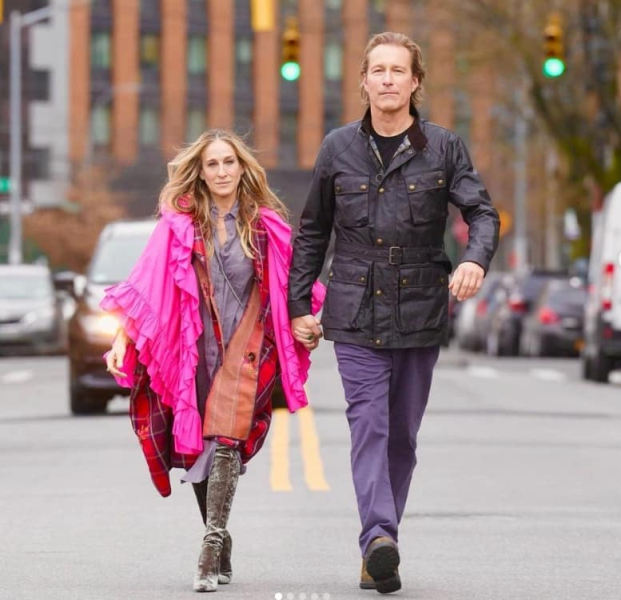 Sarah Jessica Parker has caused quite a stir over the past few days! The actress and interpreter of Carrie Bradshaw from the cult series Sex and the City and its sequel, < em>And Just Like That, posted a series of filming photos on his Instagram account. It features Carrie and her former fiancé Aidan, walking hand in hand through the streets of New York City.

A publication shared by And Just Like That… (@justlikethatmax)

On the series of 5 photos, we find Carrie and Aidan who, oh surprise, hold hands in the streets of the Big Apple. Carrie is dressed in a long coat topped with a long pink scarf while Aidan seems to have changed his style somewhat and wears a coat that seems to have been imagined to age him and “make him look more serious. »

The character of Aidan, Carrie's ex-fiancé, was one of the notable absentees from the sequel to Sex and the City, along with that of Samantha, formerly played by actress Kim Cattrall.< /p>

In an interview shortly before the start of the series, John Corbett, the interpreter of Aidan, had mentioned the return of his character in the first season of And Just Like That. But nothing came of it, which disappointed several early admirers of Sex and the City. Especially since Carrie finds herself single there (for reasons viewers who watched season 1 know).

The characters of Aidan and Big are subject to division between the fans of the show since the first episodes of Sex and the City in the 90s. the best lover for Carrie.

As it is known that the character of Big will not return, several admirers wanted all the more to see the furniture designer who had long been in love with Carrie. This one represents moreover almost all the opposite of the character of Mr. Big, a businessman rather full of himself.

We still do not know the release date of season 2 of And Just Like That. Some media are talking about the summer of 2023. Season 1 is available on HBO Max, as is the documentary And Just Like That… The Documentary revealing the behind the scenes of the popular series.