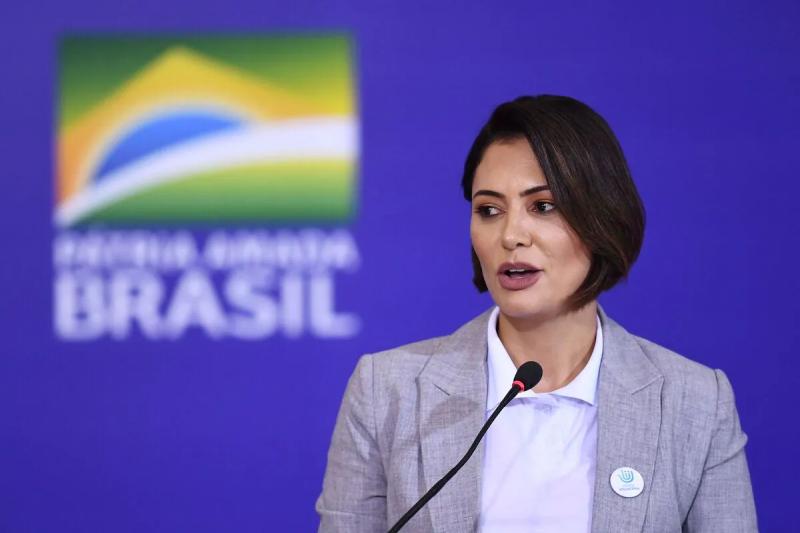 BRASILIA | President Jair Bolsonaro has been “chosen by God” to save Brazil, assures his wife Michelle, a previously discreet First Lady but now at the forefront of her husband's re-election campaign.

His mission: to strengthen the support of evangelicals and win back the female electorate, often repelled by the misogynistic excesses of the head of state.

Before the official launch of the campaign, there was month, Michelle Bolsonaro, a 40-year-old staunch evangelical, was out of the spotlight.

Instead, she was confined to the corridors of power and was credited with influence in appointing a Presbyterian minister to the Department of Education and the first evangelical justice to the Supreme Court.

But when her husband of 67 years old, whom she married in second marriage in 2007 and with whom she had a second child, embarked on the battle for a second term, she was propelled to the front of the stage.

During the first campaign meeting, on August 17 in Juiz de Fora, where Jair Bolsonaro had been the victim of a stabbing attack four years ago, it was not the head of state who made the closing speech but, symbolically, the First Lady.

“She is the most important person here”, he declared, before passing the microphone to his wife for an intervention worthy of a pastor's sermon, punctuated by a call to recite the “Our Father” which moved thousands of galvanized activists.

At the end of July, during an event of the president's party in Rio de Janeiro, Michelle Bolsonaro had described her husband “chosen by God”, a man “with a pure heart”, before launching into a burst of laughter: “without counting that he is super handsome”.

Politically, she maintains that he is “the president who has enacted the most laws to protect women”, particularly in terms of public health.< /p>

Women represent 53% of the Brazilian electorate called to vote in the first round of voting on October 2.

According to the latest survey by the benchmark institute Datafolha on Thursday, Jair Bolsonaro is 12 points behind the left-wing ex-president Luiz Inacio Lula da Silva (45% to 33%).

This is why alongside Michelle, Jair Bolsonaro would like to appear “a good father , conservative, a reliable candidate,” says Carolina Botelho, researcher in political communication at Rio de Janeiro State University.

The role of the First Lady is “to make Bolsonaro more attractive to women”, adds Sergio Praça, political analyst at the Getulio Vargas Foundation.

A delicate mission faced with an unpredictable man who does not hesitate to utter macho remarks at his side.

Haranguing the crowd on the September 7 National Day in Brasilia, Jair kissed Michelle fiercely and allowed himself a hint of his supposed sexual potency, using the barbarism “imbrochavel” (which can be translated as “indébandable”) now popular with her supporters.

The First Lady's rise to prominence in the campaign was sanctioned by the electoral authorities, his speaking time having exceeded the limit set for an ally of the candidate in official spots.

However, Carolina Botelho believes that the concrete effect on voting intentions remains limited, the wife of the Head of State preaching above all to convinced women: “She may have managed to strengthen the convictions of Bolsonaro voters, but not to change the opinion of others. His speech hits the bull's eye for a fanatical public but not for the whole population.

On the other hand, Michelle Bolsonaro is a master asset in ensuring the loyalty of the evangelical electorate, according to Adriano Laureno, political analyst at the consulting firm Prospectiva. “She speaks like the pastors, with constant allusions to God, to the fight of good against evil,” he explains.

Brazilians of the evangelical faith represent about a third of the population and some leaders of powerful churches say they will be in the majority in ten years.

According to polls, more than half of Brazilians consider that religious values ​​should go hand in hand with political convictions.

This is why Michelle Bolsonaro does not hesitate to chant at each public appearance the slogan of her candidate-husband: “Brazil above all, God above all”.