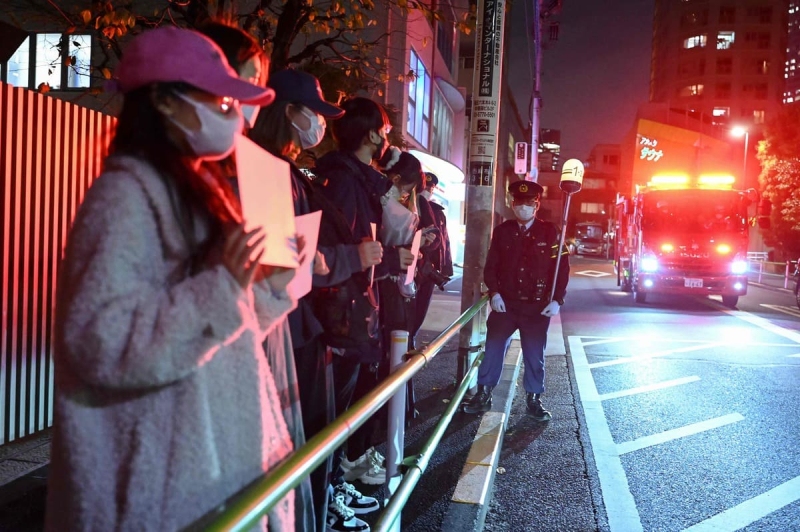 SHANGHAI | Several arrests in Shanghai and a new discouraged demonstration in Beijing: the Chinese authorities did everything on Monday to stem the historic anger movement against health restrictions and for more freedoms.

On Sunday, a crowd of demonstrators, responding to calls on social networks, took to the streets in particular in Beijing, Shanghai and Wuhan, catching the police off guard.

Among the slogans chanted in unison: “No Covid tests, we are hungry!”, “Xi Jinping, resign! CCP (Chinese Communist Party, editor’s note), withdraw!” or “No to confinements, we want freedom”.

By its extent on the territory, the mobilization seems the most important since the pro-democracy rallies of 1989, harshly repressed .

It is the culmination of popular discontent that has been simmering for months in China, one of the last countries in the world to apply a strict “zero Covid” policy, with repeated confinements and almost daily PCR tests of the population.

The deadly fire in Urumqi, capital of Xinjiang province (northwest), has sparked anger among many Chinese, some blaming health restrictions for having blocked the work of relief.

Perhaps a sign of a desire for appeasement, these restrictions have finally been relaxed in this city where, from Tuesday, residents will be able to travel by bus to do their shopping and parcel deliveries will be able to resume.

< p>The Chinese Foreign Ministry has accused “forces with hidden motives” of linking the fire to “the local response to COVID-19”, according to its spokesperson Zhao Lijian.

< p>Under “the leadership of the Chinese Communist Party and (with) the support of the Chinese people, our fight against COVID-19 will be a success”, he proclaimed, in response to the mobilizations.

But the demonstrations have also brought out demands for more political freedoms, even for the departure of President Xi Jinping, who has just been reappointed for an unprecedented third term as head of the country.

Monday morning, a police presence was visible in Beijing and Shanghai, near the places of gatherings the day before, noted AFP journalists.

In Shanghai, one of the streets occupied by the crowd during the night was now surrounded by palisades to prevent any new gathering. During the day, three people were arrested near Urumqi Street, at the very spot where a demonstration took place on Sunday.

Clashes opposed forces of the order and demonstrators, some wearing flowers or white leaves as symbols of censorship. Several of them were arrested.

A BBC China reporter covering the protests in Shanghai was arrested and “beaten by police”, according to the British media. British Enterprise Minister Grant Shapps has called the violence “unacceptable” and “worrying”.

In Beijing, a demonstration scheduled for late Monday was discouraged by the heavy police presence at the meeting place, Haidian district.

Police vehicles lined the road leading to Sitong Bridge, where a man had unfurled banners against Xi Jinping last month before being arrested.

Protesters had planned to join this bridge, the day after a mobilization of more than 400 people near the Liangma River, to cries in particular of “We are all inhabitants of Xinjiang!”

In this district now patrolled by the police, a young woman in her twenties, who came to jog, told AFP that she had followed the rally the day before via social networks.

“It sent a signal that people are fed up with these excessive restrictions,” said the young woman, on condition of anonymity.

In Hong Kong, a territory shaken by pro-democracy demonstrations in 2019, dozens of people gathered at the Chinese University on Monday to pay tribute to the victims of the fire in Urumqi, AFP found.

Others unfurled banners and held up flowers in the Central district, the financial heart of the city.

On Chinese social media, all information about the protests appeared to have been erased on Monday. result linked to the mobilization.

The strict control of the Chinese authorities on information and health restrictions on travel inside the country make it difficult to verify the total number of demonstrators over the weekend.

But such a widespread uprising is extremely rare in China, given the crackdown on any form of opposition to the government.

Protests also took place in Guangzhou, Chengdu and Hong Kong, but also in Wuhan, a city in the center of the country where the world's first case of COVID-19 was detected almost three years ago.

The People's Daily published a text on Monday putting warning against the “paralysis” and “weariness” of the “zero Covid” policy, without however calling for an end to it.

“People have now reached a boiling point because there is no clear direction on the way forward to end the zero Covid policy,” Alfred Wu Muluan, China policy expert at the National University of Singapore, told AFP. .

“The party has underestimated the anger of the population,” he adds.