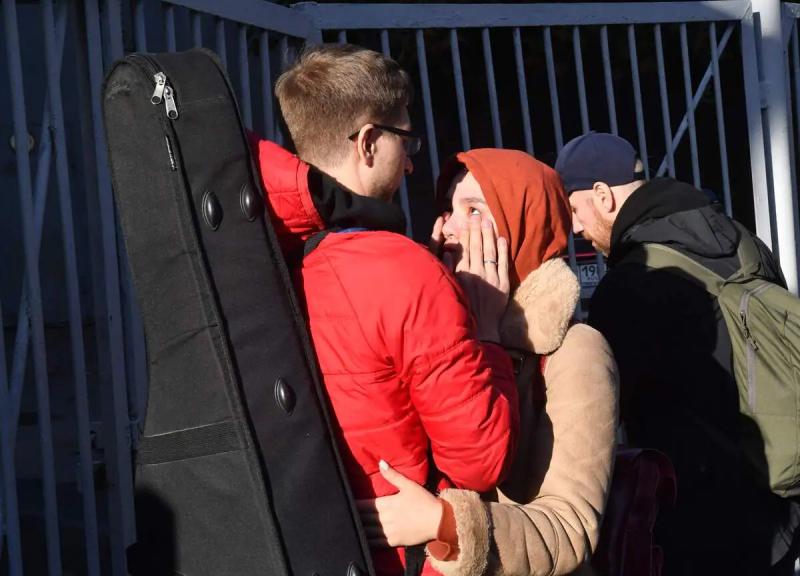 SAINT PETERSBURG | They are not sobbing and seem to believe that these are just military exercises: the relatives of Russian reservists called up to support the Russian offensive in Ukraine came on Tuesday to say goodbye to their sons, fathers or fiancés in Saint Petersburg (north- western Russia).

These people, gathered in front of a military police station in this former imperial Russian capital, talk to each other in a low voice, sometimes approaching the fence separating the police station from the street, to exchange a few words with the reservists, who are already from the on the other side.

“These are only military exercises, aren't they?” asks a woman in her sixties to her neighbor.

“I believe, yes, the military exercises, I don't know, nobody knows, but they stay here in the back,” replies confidently Svetlana Antonova, 55, whose 27-year-old son came to the police station on Tuesday after receiving the summons last Saturday.

Nikita, a 25-year-old reservist, and Alina, his 22-year-old fiancée, stand hand in hand through the fence, he very moved, she with tears in her eyes.

“I don't know what to say, I'm in shock”, admits Alina without taking her eyes off her beloved.

“I was not surprised after receiving the summons, my relatives rather yes, but not me . Well, if you have to go, then you have to,” says this young man who did his military service a few years ago.

One more twist of fate

For Galina, 65, and her family, the mobilization of her son-in-law is “another twist of fate”: her daughter is undergoing treatment for cancer, and their child is only 12 years old.< /p>

“He works in construction. In the army, he was a shooter at the time,” says Galina, holding her grandson Micha by the hand.

“It is said that they will be sent to the military training base near Zelenogorsk”, in the vicinity of Saint-Petersburg”, continues Galina.

“Did we think about escaping mobilization? Not at all. We have nowhere to go,” she adds.

Since the announcement of a “partial” military mobilization of reservists in Russia on September 21, tens of thousands of men Russians of fighting age have fled abroad, particularly to the former Soviet republics of Central Asia and the Caucasus.