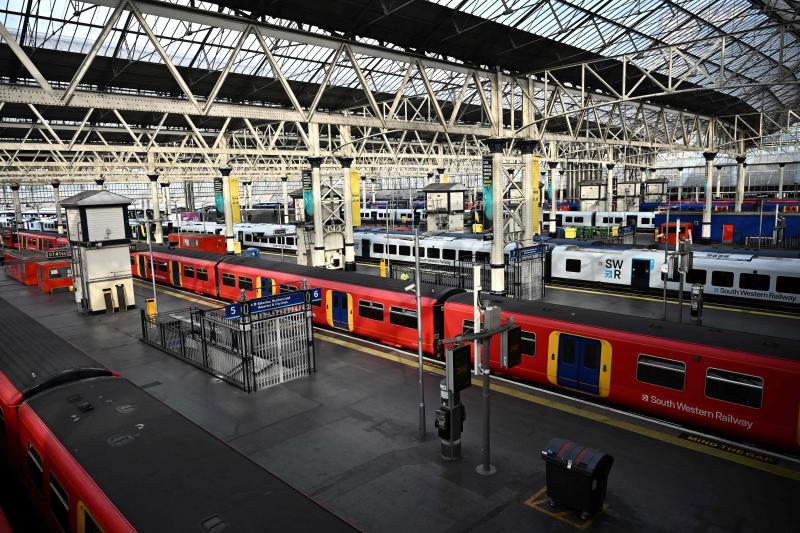 LONDON | UK stations were largely deserted on Tuesday as commuters opted to avoid using the railways on the day railway workers launched a three-day strike over jobs and wages, billed as the biggest in thirty years.

The great hall of London's King's Cross station thus welcomed only a sparse public on Tuesday morning, mostly sympathetic towards the railway workers' strike, instead from the usual rush hour rush, when one out of two lines was closed and four out of five trains canceled in the country.

“I have to travel all over the country for my job. So today I have to go to Leeds (north). There aren't as many trains as usual, but I managed to manage,” Jim Stevens, 40, a commercial photographer, told AFP.

At the station from St Albans, north London, the first train did not leave until 08:00.

Due to a reduced train journey, Scott, a 43-year-old bank worker, will be off for a 25-minute walk when he arrives in the capital, but he does not hold it against the strikers. “They have to do it to make their voices heard,” he said.

After the failure of last-minute negotiations, the parties stuck to their guns on Tuesday.

The Minister Transport Grant Shapps spoke again on the Sky News channel of a “useless” walkout. “We will have to do these (rail) reforms no matter what,” he said.

The RMT union had warned in early June that more than 50,000 railway employees would stop working “during the biggest sectoral conflict since 1989” and the major privatizations of the sector, demanding in particular wage increases in line with galloping inflation. .

In addition to wages, RMT denounces the deterioration of working conditions and “thousands of redundancies” planned, according to him, by the myriad of private companies that make up the rail sector in the United Kingdom.

Grant Shapps argues that there is a salary offer “on the table” – insufficient for the RMT – and that the “job cuts are on the whole voluntary”.

Tuesday is the biggest day of mobilization, when London Underground workers are also called to strike, but the strike will continue Thursday and Saturday.

At King's Cross station, a Californian tourist, Sunnie Schmidt is relieved that her train to Edinburgh was announced for departure. “We booked this holiday months ago and we are leaving on the day of the biggest strike. It was stressful,” she says.

In front of the station, a dozen railway workers are gathered on a picket line, with their red and green flags and banners bearing the RMT logo, approached regularly by passers-by with rather positive reactions, even if some are more critical.

Peter Chiodini, a 73-year-old doctor, a regular user of London transport, believes that the country “needs a guaranteed minimum service because people are going to lose money (with the strike), they are disturbed” for going to work or to their exams.

For the past week, the executive has been saying that this strike will hurt the countless Britons who are prevented from going to work or medical appointments, and weigh on the accounts of SMEs already battered by COVID-19.

Grant Shapps says he is considering “protections” for public transport users, including a possible “minimum service” or the replacement of strikers, in particular by temporary workers.

This walkout also threatens to disrupt major events sporting and cultural events, such as the Glastonbury Music Festival (south-west of England), a Rolling Stones concert in London on Saturday and the final exams of certain high school students.

The government also argues that the strike is likely to encourage even more teleworking and therefore a decline in the use of trains, in a sector which has benefited from 16 billion pounds of subsidies to help it cope with to the drop in revenue during the pandemic.

The strike could nevertheless extend to other transport or other sectors, such as education, health, post. Some lawyers have already voted in favor of a walkout as of next week, because of a dispute with the government over the amount of legal aid.