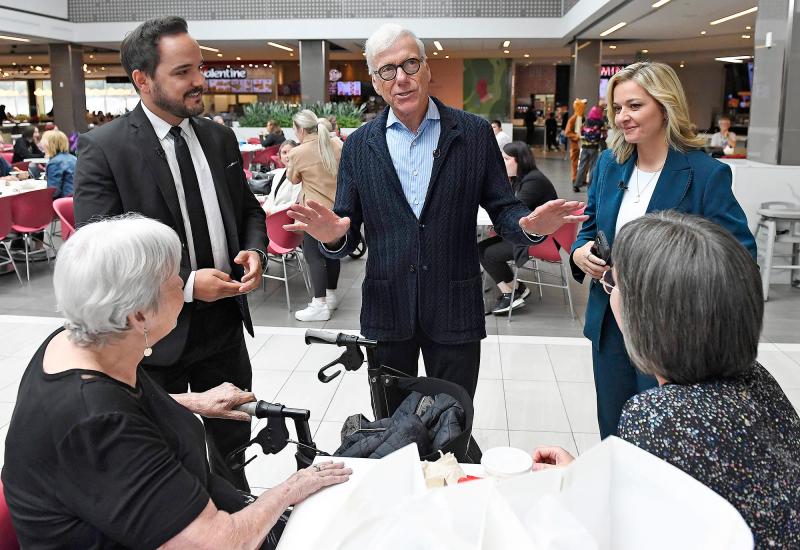 After a short night due to Gemini night on Sunday, where he was “deeply touched” by the long standing ovation he received from his peers, Pierre Bruneau took over the leadership of the capital, Monday morning, to undertake a tour of the regions of Quebec… but also his last right to retirement.

Pierre Bruneau is also in the campaign: he will multiply the walkabouts in the coming days all over the province in view of the election night Québec 2022, which he will host on TVA on October 3.

At Laurier Québec on Monday, along with TVA Québec anchors Julie Couture and Pierre-Antoine Gosselin, Pierre Bruneau was nourished by discussions with people of all generations, including many teenagers who begged him for a selfie.

The anchor was delighted to see an 11-year-old boy running up to him to share his dream of becoming a journalist. He did not fail to tell his idol, his eyes shining, that he listened to the news bulletins every night.

“Young people recognize me! I am happy ! It's so touching,” he exclaimed, still amazed at the unwavering love for him.

He may have announced his retirement in June after 46 years of loyal service to TVA, but Pierre Bruneau has been busy this summer. He had agreed to pilot the Face-à-Face Québec 2022as well as the election night before his final departure.

Away from the heat of the moment for the first time, the veteran confided that he found his preparation for these two important shows “difficult”. . “When you're in a newsroom, everyone feeds you all the time. This year, I have to discipline myself to read everything and hear everything. I changed my way of working, but the result will be the same. »

The one who hosted more than thirty election evenings in his career will be supported on October 3 by Mario Dumont, Emmanuelle Latraverse, Paul Larocque, Jean-Marc Léger, Pierre-Olivier Zappa and around twenty journalists deployed in the field.

“My responsibility is to get the information when it comes out and give the results when they are there,” he says.

Caution about the results

Speaking of results. During the last election night last November, the media proclaimed Marie-Josée Savard mayor of Quebec before a spectacular comeback from Bruno Marchand. Will he launch the famous “if the trend continues…” with more caution this time?

“Jean-Marc Léger and Mario Dumont told us to be careful because the trend often changes in Quebec with advance voting. We announced it because we have established scales, but it is as if our electoral office had not anticipated this story of advance voting. This time, I think it will be played on the division of votes between the five parties. These are still forecasts and we are unfortunately not immune to errors, ”he regretted.

Pierre Bruneau does not intend to make a Dominique Michel of himself: < em>Québec 2022 will be its last meeting with viewers. He will miss his job: he claims to have had a twinge in his heart watching from his home the media coverage devoted to the death of the queen. “To tell you that I wouldn’t have wanted to be there would be lying. »