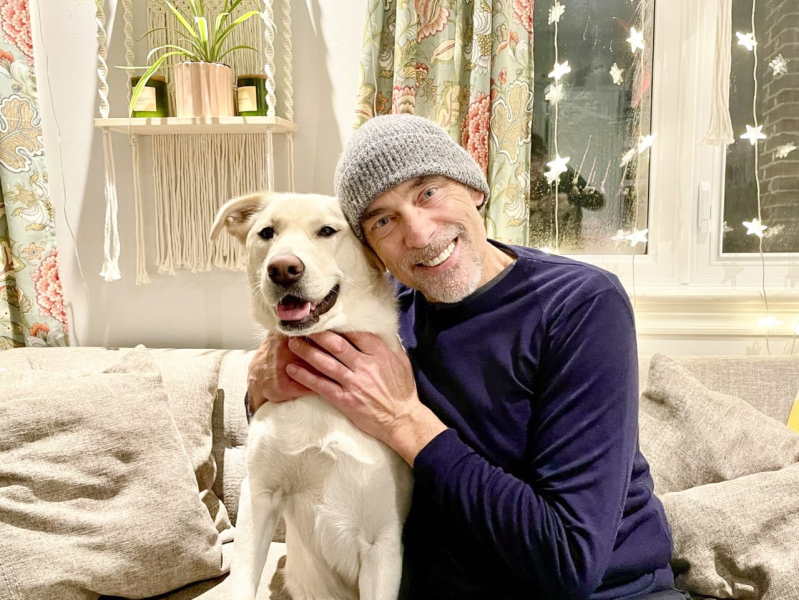 Romy is a one-year-old dog, a nice mix of Labrador and husky who introduced Pierre Gendron to the happiness of living with a dog.

< p>What is the reason that led you to have this dog?

We adopted her when she was four months old. With the pandemic, there were more dogs in the neighborhood and our cat was getting old. My girlfriend and I wanted to adopt. She looked at the shelter sites. There were a few dogs available. Hard to resist. We went to see them and left with Romy. I was ready! We have four children at home and Romy is our fifth child! He's a family member. There are four of us to take care of her so she is pampered, anyway.

Honestly, I had never had a dog before. Also, when I was 8 or 9, I got bitten by a dog. I developed a solid fear of dogs, however my confidence in them gradually increased over the past few years and I was a little less afraid of them. Today, I'm so freaking out over Romy. We have a nice relationship. At 59, it's nice to discover this special relationship you develop with a dog. A dog, all that it gives you in terms of energy, joy of living, presence! Today, I therefore answer that I am totally dog! That being said, I loved our cat Jack anyway.

How would you describe Romy's personality?

She is a lady full of life who always wants to make others happy, to please and to play. She loves everyone. She is very social. He's a good dog! She does have a few flaws. She digs holes when she's bored and she loses a lot of hair.

Going to the park, just next to. There are more and more dogs in the neighborhood. It is for her a social and “political” activity, because we need a dog park! She loves dogs and plays with them all. She is really sociable.

What is her favorite place?

In her mother's skirts! My wife works a lot at home. Romy sits under her desk.

What do you wish you had known before adopting Romy?

I wish I had known how it brings life, a dog. If I had known, I would have done it long before. Sure, it's hard work, a dog, especially in the early stages and at a young age, but the benefits outweigh all of that.

Who cares for your pet when you leave?

Francine, my mother-in-law. She loves animals so it makes her very happy. Romy likes to go to her “grandmother's” in Quebec.

How can Romy be a source of inspiration for you?

I see her as an inspiration of life. At 59, in the morning when you get up, it's rather “stiff”. Romy gets up in a good mood and her positive attitude gives me energy. I see it as a big orange juice in the morning! She reminds me that life is beautiful and she says to me: “Let’s go! You should take advantage!” Life is not complicated with her.

She looks like us in the sense that Romy is very beautiful and we are a very nice family! (Laughs) She is open to others and sociable. So are we.

What did Romy's arrival bring you?

Hair everywhere! Hair on the couch; hair in the sweeper; hair! (Laughter) Seriously, she arrived as a new child. She brought us happiness.