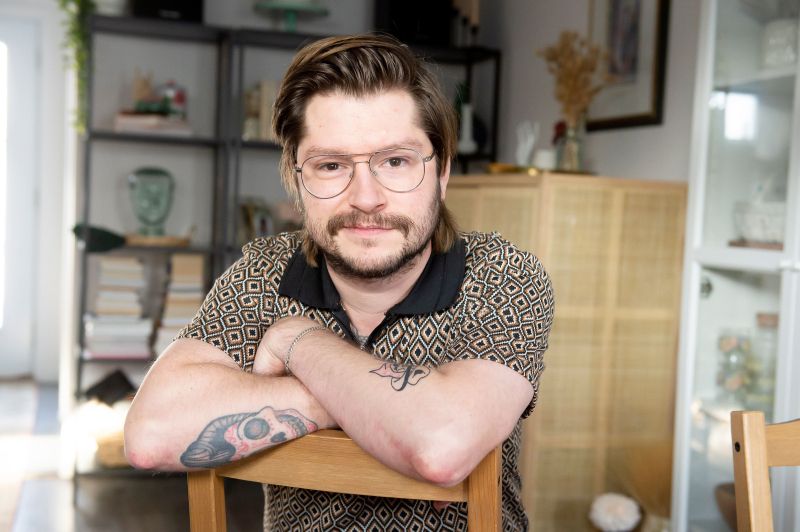 His name predestined him to the profession of musician, his family of artists who liked to strum the guitar by the fire too. At 29, Pierre Guitard offers a touching and mature second album in which he reveals himself like never before, cleverly baptized Anhedonia.

Anhedonia is an inability to feel happiness for something that once made us happy. This is a term that touched, in a very personal way, Pierre Guitard during the difficult months of the pandemic when “something that will not come back has broken”, he believes.

Enough for this working title to become that of his second album, an introspective opus whose creation has done as much good as harm to the singer-songwriter .

“This album is a path, a path to follow, ideally in order, explains the artist from Madran in New Brunswick. This is the path I took to get where I am. I touch on cases that are true and since I am not unique, I suspect that several people have felt like me during the pandemic. I think he can show people that things can get better.”

With his friend, Jesse Mac Cormack, and Rosie Valland on vocals, the singer who won the 2017 edition of the Festival international de la chanson de Granby created an album in the midst of a pandemic “which would be careful not to be pandemic”. Falling into a slump when the world was put on forced pause, his need to create to pay the rent turned into a need to say things to get better.

This gave a beautiful album that can be listened to in one go, preferably in chronological order in order to fully grasp the evolution and transformation of the moods of the artist who lets himself be gently invaded by hope and light. over the songs.

Opening up to help

“I wrote a lot of very real things, without really images or of metaphors, explains the one who released The stem and the root, his first album, in 2016. It was coal and not diamonds. This is an important album in my career and my journey. I am proud and happy, but the object is like a big cancer that I evacuated. It hurt, it was tough to get out. If he can do good to people, I'll be happy.”

Happier and certainly lighter, Pierre Guitard explains that he wants to show other facets of his personality in his future creations.

“I often make depressing albums, but I'm not heavy, I'm funny in life, insists laughingly the one who wrote his first songs at 16 years old. Maybe I want to start doing stand-up too, because I'm a humor freak.”

The Album Anhedonia by Pierre Guitard can be found on the platforms. To follow the news of the artist who will be in concert in Gatineau on February 10, visit his social networks and his official website: pierreguitard.com/