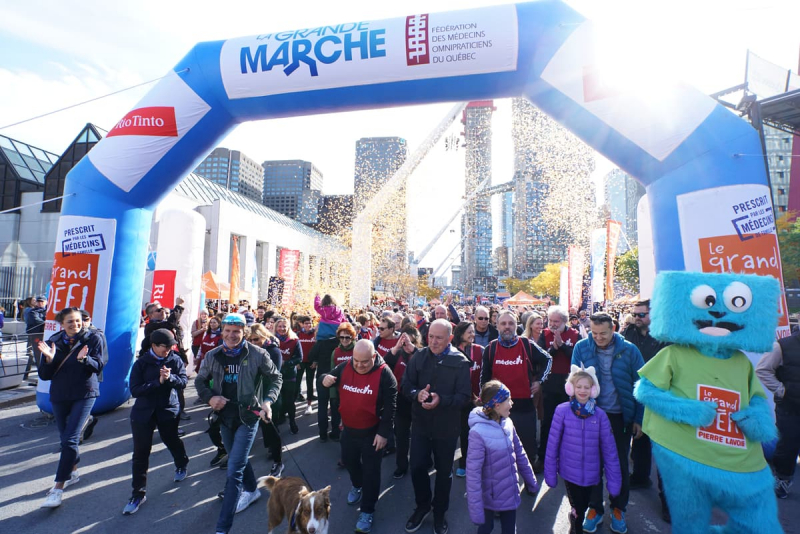 Pierre Lavoie is well aware that Rome was not built in a day. This is why he continues to organize events like La Grande Marche, which took place from Friday to Sunday throughout Quebec, to continue to promote health prevention through physical activity.

After waddling in front of a mini-concert by country singer Guylaine Tanguay at Place des Festivals, approximately 5,000 people began a five-kilometre march through downtown Montreal, under a warm fall sun.

< p> “I hope that people at the weekend thought about walking for their health, expressed Pierre Lavoie at the start of the course. Physical activity for humans is like drinking, eating and sleeping. The body needs it.”

The Grand Défi Pierre Lavoie (GDPL) had set itself a specific objective at the dawn of this eighth edition: to convince 100,000 Quebecers to put on their sneakers. Mission accomplished.

“We really wanted to reach 100,000 and we did. achieved. We were hoping for a nice weekend and a nice temperature, it happened too. It's a movement, so we want to make it grow,” continued the GDPL conductor.

He is under no illusions, however. The 58-year-old triathlete knows that he will have to continue to “hit the nail on the head” for his message to catch on and eventually have a greater influence on the place of physical activity in society.

“I think what we are proposing is common sense. This is something that will take time. I'm patient. Social changes take about twenty years.”

Even if the mission that Pierre Lavoie gave himself is quite commendable, he had to deal with the same problems as almost any organization or company in 2022: the labor shortage.

Furthermore, the GDPL has struggled to gain momentum after years of uncertainty caused by the COVID-19 pandemic.

“I would say 2022 was not an easy comeback,” said admitted the native of L'Anse-Saint-Jean. We had to leave the broue. We had problems with employees and volunteers like everyone else. In 2023, we will start again on solid foundations.”

The main reason for Pierre Lavoie's optimism is the widespread support he can count on across the Belle Province. In total, 100 municipalities have organized a branch of the Great March.

“Montreal, for us, is an important city, because we send prevention messages effectively here. , he concluded. What makes us happy now is that there are 100 steps across Quebec. All of Quebec is represented. Health and prevention have no borders.”