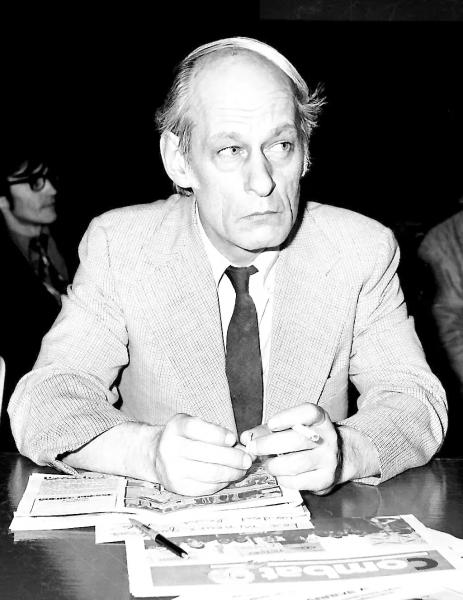 We can't be Charlie with variable geometry, depending on the wind or our moods.

If we defend freedom of expression, it's a non-negotiable principle.

To be Charlie is to refuse that the fact of publishing cartoons results in a bloody terrorist attack.

However, that does not take away our right to find a drawing that is perfectly disgusting and in very bad taste…

At the same time, we can defend the right of the Gazette to publish a caricature on René Lévesque AND find it contemptuous, humiliating and insulting to show a dog pissing on the hero of a people.

Since the publication, yesterday morning in the Gazette, of a caricature of Boris, showing a dog sporting a Canadian flag pissing on the image of René Lévesque, I was torn between two ways of seeing.

Version 1: The cartoonist glorifies the dog peeing on the icon of Quebec independence.

Version 2: The cartoonist ridicules the old lady who continues to hate René Lévesque, even though he has been dead for 35 years.

Is this cartoon contemptuous… or, on the contrary, the reflection of a reality?

These old ladies who hate Lévesque so much and everything he represents, they exist. They are fiercely opposed to Bill 96, they wake up at night to jeer at the “goddamn separatists” and tear their shirts because they ask to be served in French in Montreal.

Baddies who refuse that the Quebec stands up, those who spit us “I don't speak French”, there are still plenty in Canada. And they're not all old…

The question therefore arose: if you show Canada pissing on Lévesque, are you also pissing on this nationalist icon or, on the contrary, you denounce those who piss on him?

The cartoonist himself said in various media yesterday that he adores Lévesque and respects him. But the problem is that a caricature cannot be accompanied by a user guide or an instruction manual. It's like a joke from a comedian on stage: if you have to explain your gag, it's because it failed.

Monday, I was telling you about this caricature from the newspaper L 'New Acadiashowing a Taliban compared to Cro Magnon. A drawing that activists (including the National Council of Muslims) called “Islamophobic” when there was no incitement to hatred, quite the contrary.

At QUB radio, I interviewed Djemila Benhabib, who will soon release her book in Quebec Islamophobia, my eye! She told me that some people are “cartoon illiterate”.

The caricature still needs to be clear. If Boris had wanted to pay homage to Lévesque, there was surely a better way to do it.

Yesterday, on QUB radio, Guy Nantel confided to me that in his next show, which he is working on, he cheerfully makes fun of… René Lévesque!

Bravo! In humor, there are no “sacred cows” or “untouchables”.

If you start saying “you can laugh at everything… but not at my hero”, you No longer Charlie.