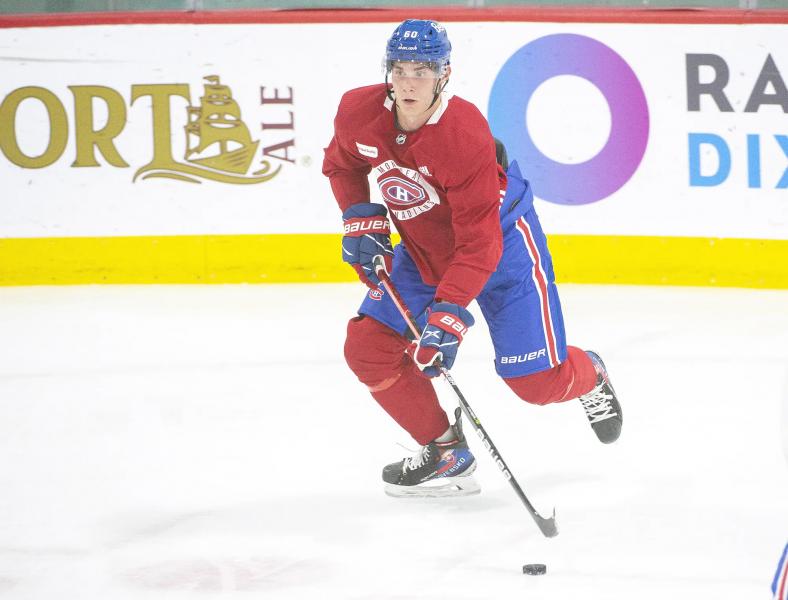 Juraj Slafkovsky, Kaiden Guhle and the other hopefuls of the Canadian will quickly discover the charms of Buffalo. After medicals and physical tests on Wednesday, 28 Habs prospects will participate in a six-team rookie tournament in the Sabers environment at LECOM Harborcenter.

If, in the past, the Canadian participated in a competition in another exotic city of North America like Belleville in Ontario with the hopes of the Toronto Maple Leafs and the Senators, the organization has now chosen to change the formula.

The Habs, Sabers, Senators, Devils, Penguins and Boston Bruins will send several of their best prospects to Buffalo to hold a small tournament during which each of the six teams will play three games, with the exception of Pittsburgh who will make an appearance in a single game.

Simon Nemec, the second pick in the last draft in Montreal, will also make the trip to Buffalo. The Slovakian defenseman and good friend of Slafkovsky will be one of the key players in New Jersey.

The Sabers will also have big names for this event with three first-round picks: Matthew Savoie (ninth in 2022), Jiri Kulich (28th in 2022) and Isak Rosen (14th in 2021). Owen Power, the first pick of 2021, will not participate since he already has an assured position on the blue line of the Sabers.

Jake Sanderson, the Senators' fifth overall pick in 2021, will also be one of the top prospects at this meeting. The American defender should logically earn a position this season with the defense brigade in Ottawa.

Juraj Slafkovsky had participated in the development camp of the Canadian in July. He will put on the Habs uniform again during a rookie tournament this week in Buffalo.

Juraj Slafkovsky will have to live with this reality. It will attract attention at each step. In Buffalo, he will take his first steps with the team that bet on him in first place in the last draft. The 6-foot-3, 229-pound tall winger will be looking to earn points at this tournament. He will be one of the offensive engines of the CH formation.

Craig Ramsay, his coach at the Beijing Olympics and at the Senior World Championship in Helsinki with Slovakia, has already predicted he will open the season in Montreal. But to achieve this, the number 20 will have to know a big camp. And it starts now.

Filip Mesar, Slafkovsky's longtime friend and also the Habs' other first-round pick this summer, will also find himself under the microscope. The right winger will not be returning to his homeland this season, Slovakia. Kent Hughes, Jeff Gorton and the other heads of the team will have to determine where he will continue his apprenticeship between the Kitchener Rangers, in the Ontario Junior League, and the Laval Rocket, in the American Hockey League.

Talent on the blue line

The CH will have a very good brigade of defenders at this tournament with Kaiden Guhle, Justin Barron, Jordan Harris and Arber Xhekaj. Barron and Harris already have NHL experience with seven and 10 games respectively.

Mattias Norlinder, who had a tough season last season splitting his time between Laval and Frolunda, Sweden, will also want to get back into the good graces of the organization. Still hampered by a shoulder injury, Logan Mailloux will not play. The disputed first-round pick in 2021 will, however, be in the team's entourage.

Roy, Kidney and the others from the QMJHL

Joshua Roy will want to build on the momentum of his 119-point season with the Sherbrooke Phoenix and his gold medal win at the World Junior Championship with Canada. But the fifth-round pick in the last draft will not be the only representative of the QMJHL. Center Riley Kidney, who also reached 100 points with the Acadie-Bathurst Titan, should fill an important role.

Forwards Xavier Simoneau, Pierrick Dubé and Ryan Francis also come from the Courteau circuit, as do William Trudeau and Miguël Tourigny among defenders, as well as Antoine Coulombe and Riley Mercer among goalkeepers.

There isn't a big hope among the three goalies invited to this camp. Joe Vrbetic, a lowly 2021 seventh-round pick, is the only goaltender who has ever heard his name in an NHL draft. Coulombe, of the Shawinigan Cataractes, and Mercer, of the Drummondville Voltigeurs, received invitation cards for this tournament.

< p>Due to stringent NCAA regulations, Sean Farrell, Lane Hutson, Luke Tuch and Jakub Dobes will be conspicuously absent. Oliver Kapanen, who is already with the KalPa team in Finland's Liiga, will also be absent.

A bit of action