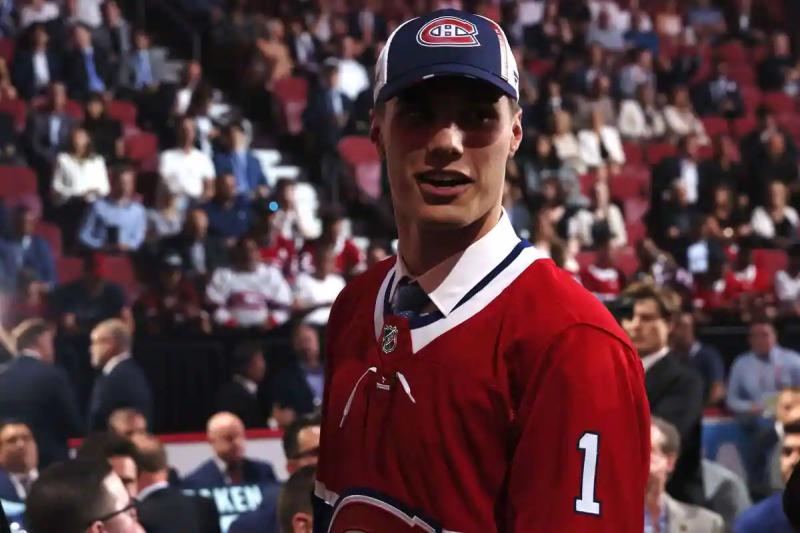 Achieving the very first pick in your first draft in the shoes of a general manager is not a task that can be taken lightly. Especially when the race between the three main candidates is tight as it was this year.

It was after weighing the pros and cons with his close guard for a long time that Kent Hughes finally made the decision to draft Juraj Slafkovsky.

“ We started leaning towards Slafkovsky on Wednesday morning. We had debates, we carried out assessments, ”explained the general manager of the Canadian at the end of the first round.

During his tenure as Hughes, Marc Bergevin kept insisting that good center players were a rare commodity. That to get your hands on one of them, you had to fish it out. Since he's turned his nose up at Shane Wright and Logan Cooley, it seems Hughes' theory differs somewhat.

“Players who skate, bring physicality and are able to scorer, like Juraj, there are not many. Besides, I get an incredible number of calls for Josh Anderson. So there is also demand for this type of player,” explained Hughes.

That said, the former agent indicated that the deal to bring Kirby Dach, a great center player, to Montreal was finalized before he took the stage to announce his first selection.

Hughes and his cronies fell in love with the Slovak during the World Championship when “even when playing against men he always wanted the puck”.

Hughes was also smitten by the Slafkovsky's answer to the question: “What do you like most about hockey.”

” He replied that he liked to be on the ice, late in the game, when his team was leading 4-3 or trailing 4-3. That response is what we have seen from him as a player.”

Still on the podium after a nearly 20-minute conference, Hughes continued the conversation with a handful of journalists. The rookie CEO of CH confirmed that he had not yet had time to speak in person with Alexander Romanov.

“I thought he was already in North America, but when I tried to reach him there was the European ringtone,” he said. I couldn't talk to him. I will do it. I know Romy loved Montreal and the fans loved her a lot.

The sentimental aspect, however, did not have the upper hand on the hockey side. Hughes lost a piece of his puzzle with the departure of Romanov, but it was also the piece needed to move in order to receive a first-round pick from the Islanders (13th) to then complete another trade with the Blackhawks and get Kirby Dach.

“We also have some good young left-handed defensemen in our system with Kaiden Guhle, Jordan Harris, Arber Xhekaj and Jayden Struble,” Hughes said. There is depth to this position. »

“I found it very difficult to trade Romy. We had been talking in Chicago for Kirby Dach for two or three weeks. We wanted to offer several choices in the draft, but we weren't able to convince them with the choices we already had. Romanov had very good market value. I am disappointed to lose Romy, I wish him good luck with the Islanders. But to get what you want, you have to make sacrifices.”

Hughes added from the fast cross, but also endowed with an imposing physique (6 ft 4 in) with the arrival of Dach.

” We believe in Kirby Dach “, underlined the former players' agent.  ;

In his first three seasons with the Hawks, Dach has yet to achieve impact player status in the NHL. Far from there. But he remains a 21-year-old center who has also been held back by injuries.

“I wouldn’t say he didn’t succeed in Chicago. He is a young man born in 2001, like Cole Caufield. They come from the same repechage. He has already been in the NHL for three years. If we look at Caufield in January, we found that he was not succeeding. Kirby is believed to be a youngster with potential.