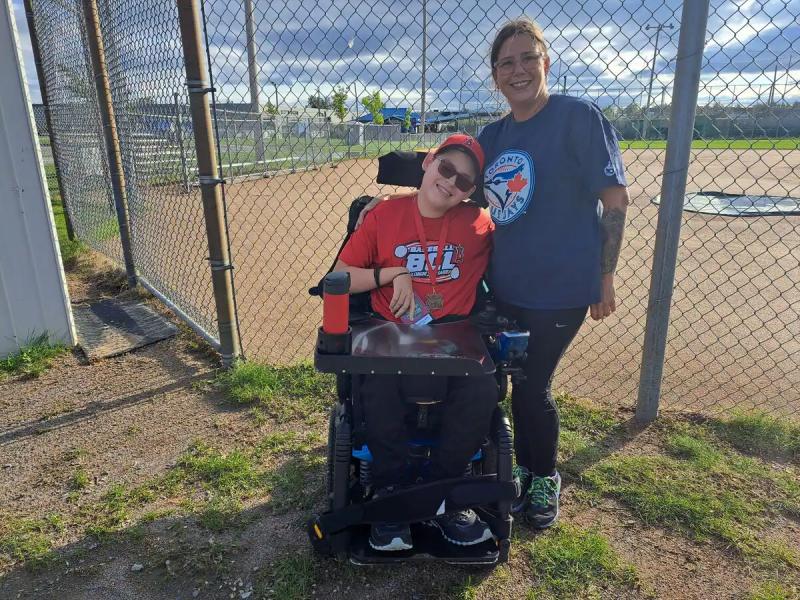 A young man with cerebral palsy that makes his legs useless discovered this summer that he could play baseball and wants to play the sport for a long time to come.

Justin Pons, 18, has spastic quadriparesis and mild intellectual disability. His birth illness affects his speech, his vision and forces him to move around in a wheelchair.

“At first I couldn’t hit the ball,” he told Justin, when we met him with his mother at Parc Laverdière in the Le Gardeur sector, in Repentigny, where the games took place from June to August.

When the season started, Justin had to hit the ball using a T-ball [a tripod post on which the ball is placed at hitting height], but after weeks of practice he was able to touch it when someone threw it at him.

“Baseball is important to me, I want to be in baseball all my life,” Justin added, very emotional and happy to talk. of his experience.

“And I made new friends with baseball,” he said.

His mother, Nancy Lépine, was very involved so that the experience goes as smoothly as possible.

“It was very playful, there are some who don't understand the game and others better, depending on their development, explained Ms. Lépine, who had heard about this baseball program from Justin's social worker. Of course you have to guide them, it's really based on fun, hitting the balls, trying to catch them and they ended up understanding as the summer progressed.”

This adapted baseball program is sponsored by the Jays Care Foundation, the charitable organization of the Toronto Blue Jays.

This foundation provides local leaders, in this case those of Baseball Charlemagne-Le Gardeur, with adapted baseball equipment including sound balls, sound bases and gives them $500 to start the program, plus $35 for each registered player.

“They also provide the caps and jerseys”, told us Francine Cinq-Mars, president of Baseball Charlemagne-Le Gardeur, an organization which until this year only dealt with regular baseball.

“For us, this activity of Adaptive baseball was a leap into the total unknown, she added. To see their smiles during drills and the game, to also see whole families come to watch the games and encourage the youngsters, all that made our summer.”

The return of the program is already confirmed for next summer. In the meantime, a closing game of the 2022 season is scheduled for this Saturday at Laverdière Park.