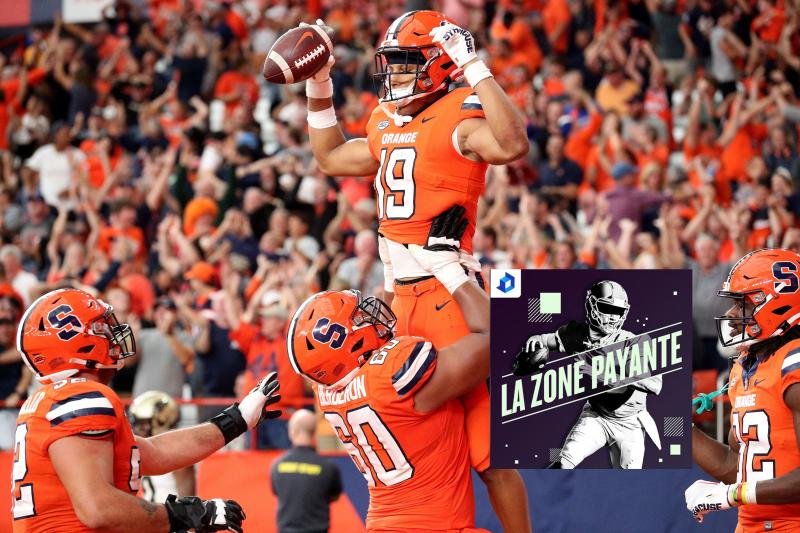 Quebec players have had great stories in the NFL over the past few years and everything indicates that Matthew Bergeron will be next. The Victoriaville-born offensive lineman is having a stellar season at Syracuse University and he increasingly dreams of the next step in his career. “The NFL is what motivates me to wake up early every morning,” he says in the most recent episode of The Paid Zone.

Your NFL podcast this week features an interview with the blocker who racks up honors and the praise. Recently voted among the captains of his team, named offensive lineman of the week in the ACC conference at the start of the season, identified among the 100 best preseason prospects for the draft by Pro Football Focus, Bergeron is one step closer to the dream.

With co-hosts Jean-Nicolas Gagné and Stéphane Cadorette, he discusses both his present with a surprisingly successful team and his future in football. Matthew Bergeron will certainly be a name to remember in the coming months for fans of the oval ball.

Pay Zonealso returns to the news of the week, including the personal problems of Tom Brady. Will his supposed divorce from model Gisele Bündchen end up being the adversary who gets the better of him? It must be said that the tireless veteran has seen others.

The Tua Tagovailoa case also continues to be talked about. The NFL is already reviewing its concussion protocol. We take stock of the situation.

Our listeners, always on, submitted several relevant questions to us. Among other things, we tackle the beginnings of the Kenny Pickett era in Pittsburgh, the problems of the Rams and the Patriots, the coaches on an ejection seat and the contending teams who bet (or not) on a good depth at the position of quarterback- back.

Last week's predictions helped boost our rating. What about week 5? Each match is of course analyzed in anticipation of another big weekend.

Of course, we couldn't leave you without a hard-hitting “At the Bar!” section with a strong rant and a punishment all in humor… Good listening and thank you for sharing!