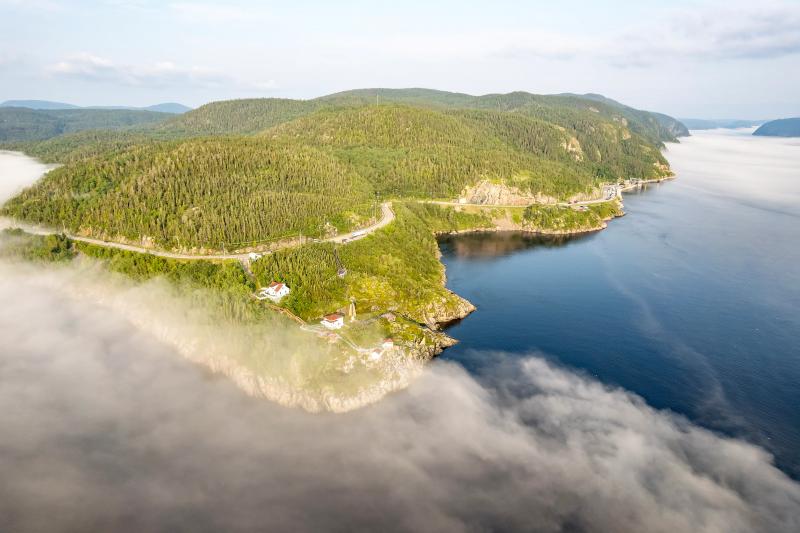 If you have already visited the North Shore, probably the “traverse” Baie-Sainte-Catherine/Tadoussac is familiar to you. Regulars of this crossing know that the wait can sometimes be long. Well hidden behind a mound, a Parks Canada microsite is hidden there. Many travelers pass by without even realizing it. These are Pointe-Noire, the Saguenay–St. Lawrence Marine Park.

This interpretation and observation center is an essential site for spotting belugas and rorquals from the shore. Frequently, small groups enter the Saguenay Fjord, skirting the cliff below Pointe-Noire. Rich in maritime history, Pointe-Noire has been guiding sailors since 1875, thanks to its rocky shore, and later, with its range lights.

At sunrise, banks of fog surprise early visitors with a sometimes mysterious natural spectacle. The deaf sound of fog horns resonates in this mountainous terrain and creates an exceptional atmosphere. When I visited, huge banks of golden fog under the first ray obstructed visibility. But I can easily hear the breath of many beluga whales parading under my feet below the cliff. Alone at this place when the curtain of mist lifts, I can finally contemplate this spectacle with my five senses!

This drone flight was carried out with the authorization of Parks Canada.