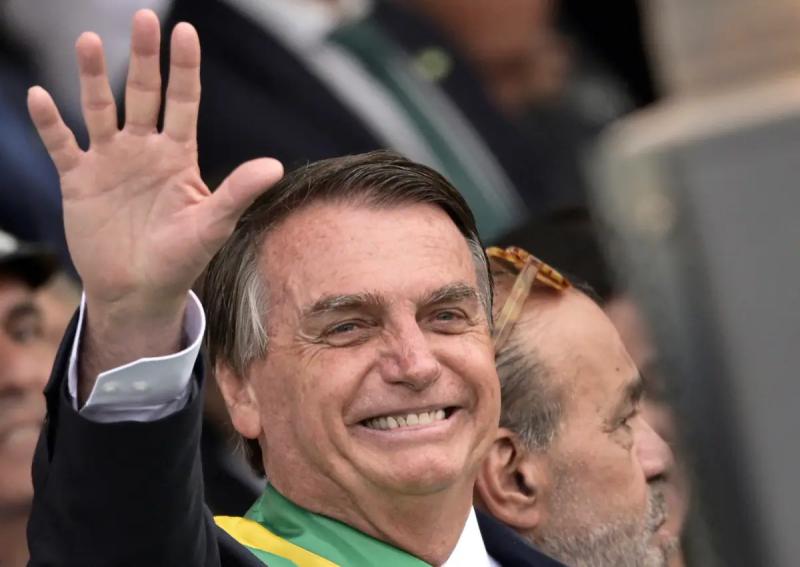 The polls are “lies” launched Brazilian President Jair Bolsonaro on Wednesday, beaten for the presidency by the left-wing ex-head of state Lula, during a fiery speech in front of dozens of thousands of supporters gathered in Brasilia for the bicentenary of independence.

“Here it is not the Datafolha lie, here reigns the truth”, he declared about the reference institute which grants him only 32% of the voting intentions, far behind Luiz Inacio Lula da Silva, 45%, in the first round on October 2.

“They want to return to the scene of the crime,” the president added of Lula’s Workers’ Party (PT) which governed the Brazil for 14 years. They won't come back!”, he assured, while the crowd chanted: “Lula, thief!”.

Bolsonaro intends to make the commemoration of the bicentenary a show of force, less than four weeks before the most polarized poll in recent Brazilian history.

“Never have I seen such a big sea with its green and yellow colors”, those of the national flag, he launched in front of the crowd which filled the gigantic Esplanade of the ministries of the capital.

On the other hand neither the presidents of the Supreme Court, of the Senate or Chamber of Deputies were present, contrary to tradition.

“Come to the streets, there is still time, dressed in green and yellow”, the national colors, had launched Bolosonaro to the Brazilians, during an interview with TV Brasil before the military parade which inaugurated the celebrations.

This day unfolds under tension, with the opposition accusing Bolsonaro of wanting to “usurp” the national holiday for electoral purposes.

Last year, September 7 was marked by putschist slogans in pro-Bolsonaro processions. The head of state had attacked the institutions and swore that “only God” could drive him out of power.

“September 7 will inevitably have a big political connotation, because we are in the home stretch of the campaign,” Paulo Baia, professor of political science at the Federal University of Rio de Janeiro, told AFP. /p>

“It will be an eventful day, which could be marred by episodes of violence,” he warns.

The military parade, canceled in 2020 and 2021 due to COVID-19, was surrounded by an exceptional security device.

Jair Bolsonaro was to continue the bicentenary celebrations in Rio de Janeiro, along Copacabana beach where a parade of dozens of jet skis took place and where thousands of fervent supporters were already gathered at the end of the morning.

Among them, Suely Ferreira, 64, carried a banner calling on Bolsonaro “to put the armed forces into action to remove the judges of the Supreme Court”, pet peeves of his hero. “A dictatorship in a toga (which) is ruining the country”, according to her.

“He will win, it is not possible otherwise”, she told AFP, “this demonstration is very important to show the world that our president is loved.”

Traditionally, the military parade in Rio is held about fifteen kilometers away. But the head of state insisted that this year, the soldiers parade in the place where the Bolsonarist demonstrations usually take place.

This decision took the town hall by surprise: Atlantica Avenue, which follows the coast in Copacabana, is much narrower than that of the center.

A compromise was finally found: there will not be tanks near the beach, but warships on the ocean and military planes in the sky, as well as demonstrations by paratroopers.

Jair Bolsonaro should first greet a crowd of bikers who promise a backfiring procession towards Copacabana, before haranguing the demonstrators on a large platform rented by pastors of powerful evangelical churches.

An intense campaign has been carried out on social networks to rally as many demonstrators as possible and bolsonarist youtubers have launched calls for donations online.

One of the sons of the head of state, pro-arms deputy Eduardo Bolsonaro, for his part invited Brazilians who “bought a gun legally” to volunteer in his father's campaign.

It remains to be see if Bolsonaro's speech in Rio will be radical.

He is hoping for “a great show of force to retain his voters, but also to seduce others who are more at the center”, believes Paulo Baia.< /p>

He has moderated his rhetoric somewhat in recent weeks, although on Saturday he called Supreme Court Justice Alexandr a “thug” e de Moraes, who notably opened several investigations against him for disinformation.