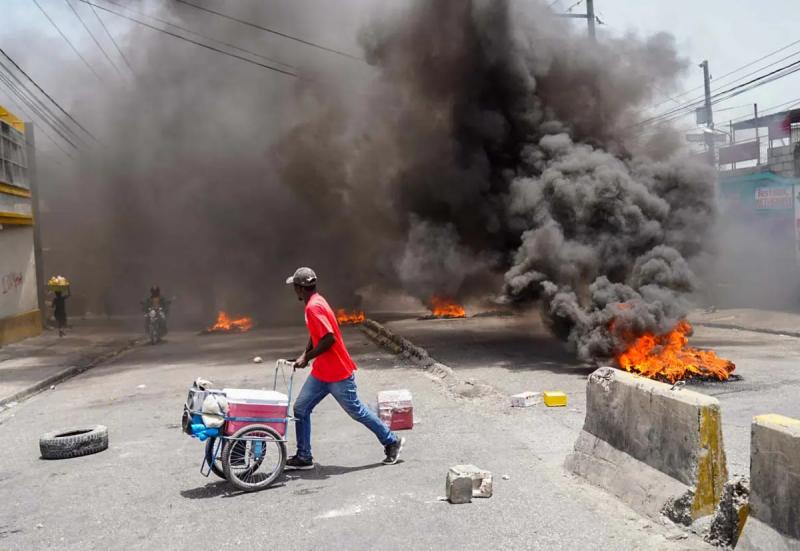 At least 89 people have been killed in a week in clashes between gangs in Port-au-Prince, capital of Haiti where prices are soaring and fuel shortages are getting worse, threatening humanitarian aid, which is crucial for the inhabitants.

“At least 89 people were murdered and 16 others are missing,” the National Network for the Defense of Human Rights said in a statement, adding that the partial assessment of this violence also reports “74 wounded by gunshot or 'bladed weapon'.

Since Thursday, bursts of automatic weapons crackle all day long in Cité Soleil, the most disadvantaged and densely populated commune in the metropolitan area: two factions of gangs clash there without the police, in lack of men and equipment, intervene.

Along the corridors of the slums that have formed there over the last four decades, thousands of families have no choice but to hide in their homes, without being able to get water and food.

Some residents are victims of stray bullets even inside their modest homes, made of simple sheet metal, but ambulances are not allowed to circulate freely in the area to help the injured.

“We call on all belligerents to allow relief to pass to Brooklyn (name of the district of Cité Soleil where the violence is concentrated, editor's note) and to spare civilians,” urged Mumuza Muhindo, head of mission of Médecins sans Frontières on Wednesday. .

Hampered in its operations to evacuate victims, the humanitarian organization has nevertheless operated on an average of fifteen wounded per day since Friday, in its hospital located near Cité Soleil.

“The long from the only road to Brooklyn, we encountered rotting or burnt corpses,” Mumuza Muhindo added.

“These may be people killed in the clashes or trying to flee and who been slaughtered. It’s a real battlefield”.

These deadly clashes between gangs affect all activities throughout the capital because it is in Cité Soleil that the oil terminal that supplies Port-au-Prince and all of northern Haiti is located.

Across the capital, gas stations no longer distribute a drop of fuel, drastically driving up prices on the black market.

Angry at this situation, motorcycle taxi drivers erected on Wednesday amount of barricades across the main roads of Port-au-Prince.

Faced with this spontaneous movement, only short trips by motorcycle within the neighborhoods were possible, AFP journalists were able to observe.

Subjected to such hazards, the inhabitants of the capital are struggling to organize their daily activities, already hampered by the risk of kidnapping.

For more than two years, gangs have been multiplying villainous kidnappings in the city, kidnapping people of all socio-economic origins and nationalities.

Enjoying widespread impunity, the criminal gangs have amplified their actions over the weeks: at least 155 kidnappings were committed in June against 118 in May, reported the Center for Analysis and Research in Human Rights, in its latest report published on Wednesday.

Exile in the face of kidnappings

Many Haitians who can flee to the Dominican Republic or the United States. Many, having neither the economic means nor the visas, risk their lives by boarding makeshift boats, hoping to reach Florida.

Many end up on the Cuban or Bahamian coasts or are stopped at sea by the US Coast Guard.

More than 1,200 irregular migrants were returned to Haiti in the month of June alone, according to statistics from the National Office of Migration.

On their return, they rediscover their difficulties in surviving, gleaning small informal jobs in a country where annual inflation has exceeded the 20% mark for three years already.

Faced with the consequences of the war in Ukraine on the global economy, this rate could exceed 30% by the end of the year, warn economists.

“We are seeing a significant increase in hunger in the capital and in the south of the country, Port-au-Prince being the hardest hit,” said Jean-Martin Bauer, director of the World Food Program (WFP) in Haiti, on Tuesday.

To circumvent the outlying areas of Port-au-Prince, in the hands of gangs, the UN agency is using airways and sea routes to send aid to the south and the north of the country.

Nearly half of the 11 million Haitians already suffer from food insecurity, including 1.3 million who are facing a situa humanitarian emergency before the famine stage, according to the WFP classification.