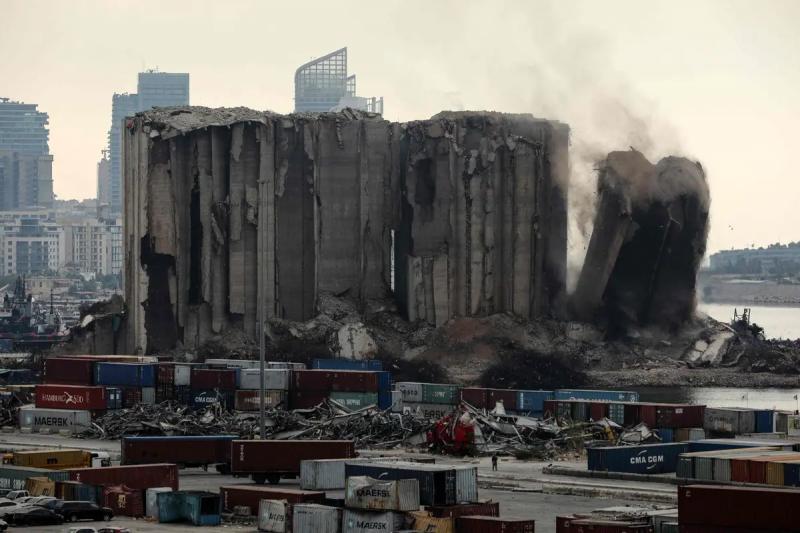 The second anniversary of the devastating explosion at the port of Beirut was marked on Thursday by demonstrations by relatives of the victims demanding an international investigation to find out the truth about the tragedy and by a new collapse of silos in the port area.

On August 4, 2020, hundreds of tons of ammonium nitrate stored carelessly in a warehouse near the port exploded. More than 200 dead and 6,500 injured were counted and neighborhoods were completely devastated, a tragic event that caused trauma for all Lebanese.

The exact causes of this explosion, qualified of one of the largest non-nuclear operations ever recorded in the world, are still unknown, as is the identity of those responsible, in a country where impunity very often reigns.

There must be “an impartial, thorough and transparent investigation into the explosion,” UN Secretary-General Antonio Guterres said on Thursday, echoing calls of NGOs, experts and the families of the victims.

On Thursday at 6:07 p.m. (3:07 p.m. GMT) sharp, the time of the explosion two years ago, demonstrators observed a minute of silence followed by applause in front of the port where, a few minutes earlier, a new part of the silos which contain thousands of tons of wheat and other cereals collapsed following a fire.

The collapse occurred as three separate steps arrived at the port of Beirut. A huge cloud of smoke covered the port area after the collapse and protesters on site wore masks while filming the structure with their cellphones.

“I see the same scene, almost from the same place, two years later,” Lama Hachem, 30, told AFP in downtown Beirut as he watched the smoke and dust billowing from the port.

“We have the right to know the truth”, launched Mireille Khoury, who lost her son in the explosion, in front of thousands of demonstrators who hoisted Lebanese flags.

The participants then took an oath to affirm their intention to continue the fight until the identity of the “criminal” was revealed.

“No justice under the rule of the militia and the mafia”, could one read on one of the banners brandished by the demonstrators. A reference to the ruling class — in place for decades — accused by much of the population of mismanagement, corruption and neglect.

“When the explosion happened, we thought the truth would be known after five days… two years have passed and we don't know anything,” Aya Qassem, 21, told AFP. who was taking part in the demonstrations.

One of the marches briefly stopped in front of the French Embassy, ​​to ask for support in relaunching the investigation.

“What we we are calling for an international investigation against criminals,” said Tracy Naggear, who lost her 3-year-old daughter Alexandra in the explosion.

In an interview with the Lebanese daily L'Orient-Le Jour published on Thursday, French President Emmanuel Macron insisted on the importance of knowing the truth.

“I say it again today with force: justice must be rendered. To mourn and rebuild, Lebanese men and women and all those who live in this country (…) need to know the truth,” he said.

Lebanon is today mired in the worst economic crisis in its history with the vertiginous fall of the local currency, shortages of all kinds, banking restrictions which have caused an impoverishment of the population.

In April, the government ordered the demolition of the silos, but this operation was suspended due to objections from relatives of victims who want to make it a place of memory. But more than two weeks ago, a fire broke out in the most damaged part of the silos, causing the silos to collapse on Sunday followed by another collapse on Thursday.

The association of the families of the victims denounced in a press release Thursday the “inaction” of the officials in the face of the fire. Even “if part (of the silos) collapses, we insist (…) on the preservation and protection” of the rest of the structure.

The investigation has also been suspended for months due to political obstruction. The main investigator, Tarek Bitar, has been prevented from continuing his mission by a series of lawsuits against him and by a campaign led by the powerful armed movement of Hezbollah which accuses the judge of bias.

“ Lebanese justice must be able to work and complete its investigation in complete transparency, free from any political interference,” the Quai d’Orsay spokesperson said Thursday during a press briefing.

In any case, for NGOs and independent UN experts “it is clear today more than ever that the national inquiry cannot do justice”. And that an international investigation “without delay” is necessary.