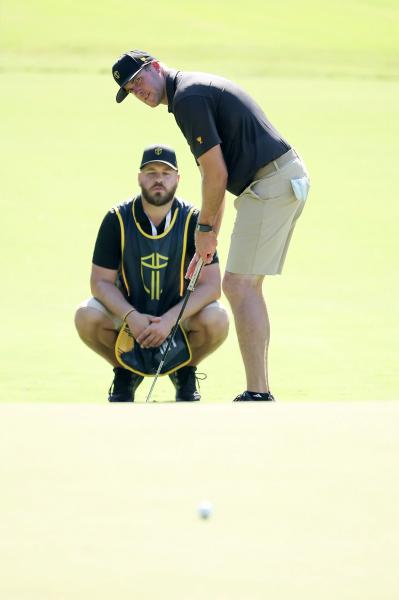 CHARLOTTE  |  If anyone had told him that he would one day walk the grounds of the PGA Tour and compete in the Presidents Cup, Mitchell Theoret would have laughed and wouldn't have believed him for a second. And yet, here he is in the greatest competition ever organized by the American professional circuit.

This now 29-year-old Montrealer was skating on the ice of the Ontario Junior League (OHL) and Europe until the end of the 2019 hockey season.

< p>Then he jumped on the opportunity offered by his long-time friend Taylor Pendrith.

He was looking for a caddy who could follow him and support him in his dream of the PGA Tour .

Together they rose through the ranks starting at the bottom. from the Korn Ferry.

They stayed the course through all the obstacles caused by the pandemic and they never let up on their hard work.

On the golf courses, Theoret applies the same recipe that brought him to the professional hockey.

On the rinks, he worked hard and got his nose dirty. He does the same to make his place among the best cadets on the planet.

“I never thought I would do this job with my life. Even just a few years ago, that didn't cross my mind. It was a very steep learning curve and I try to take in as much information as possible,” he said in an interview with The Journal at Quail Hollow this week.

At the same time, reputable caddy Jim “Bones ” Mackay, now Justin Thomas's sidekick, crossed our path in the middle of a discussion.

Observing him out of the corner of his eye, the Montreal native replied: “I have to work five times more than guys like him who have 20 or 30 years of experience. I don't have the same experience or the same background. Every day is a new challenge. This philosophy is not new to me.

“But I managed to make my place with the Niagara IceDogs (OHL) in my first season when I was drafted in the eighth round of the 2009 auction. I had given everything to make this team. I'm doing the same on this circuit with Taylor, because I had to prove to him that I deserved to be there. »

At the right time

Theoret is also very grateful to him, because the golfer offered him the best of opportunities, when he found himself at a crossroads in his professional life. Often injured, his “body was hanging by a thread”, before he made the big decision to retire.

“To say that this adventure began when Taylor asked me to carry his bag for a PGA Tour Canada tournament in Windsor four years ago, he sneered. It had to be an exception. But since we had taken fourth place, he asked me to be his junior permanently in 2019. That's when I put hockey behind me and jumped into the adventure with both feet.  »

That summer, Pendrith burned the Canadian circuit by signing two victories, including that at the Montreal stop at the Elm Ridge golf club. The two friends then climbed on the Korn Ferry circuit.

Knowing his boss inside and out, he also knows how to let him work his magic.

They don't disagree on one thing, however: the hockey team to support in the middle of the NHL season.

Pendrith is a die-hard Maple Leafs fan. Theoret, having grown up in Montreal until the family moved to Kitchener due to a change of job for his father, is a fan of the Canadiens.

“In fact, I support the Canadiens and 30 NHL teams. All, except one: the Leafs, he cursed. I hate them deeply. »

We therefore assume that this is a point of contention in the duo!

The one who grew up in Saint-Lazare has still his first Habs jersey. A relic with Brian Savage's name inscribed on it.

“It's the one I chose,” he recalled, shaking his head a bit, while he especially remembers José Théodore and Saku Koivu.

This week in Quail Hollow, he wears the jersey of the international team, the most important in his mind. Although he is far from the rinks, the attacker who was known for his agitating skills and his offensive flair enjoys falling back into the atmosphere of a team.

He pinches himself , because he would never have thought of living such an adventure on a golf course.