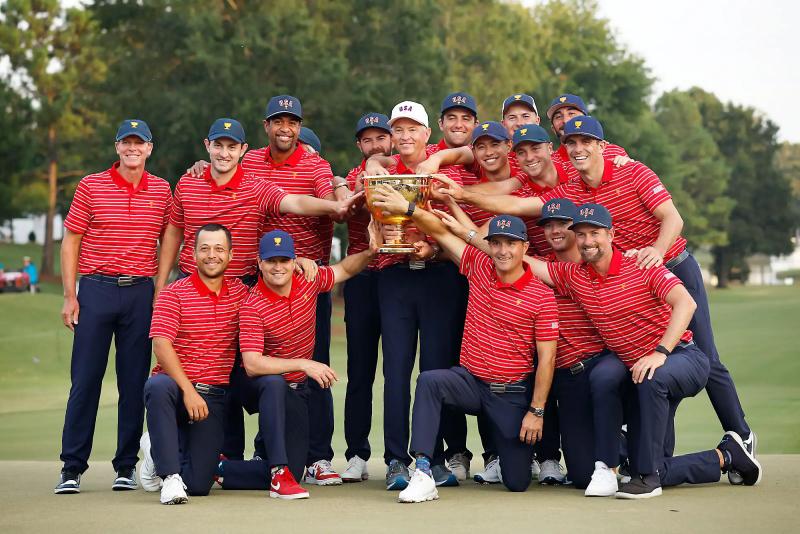 CHARLOTTE | While the Americans were expected to dominate this 14th edition of the Presidents Cup, the Internationals resisted until the last moment before capitulating on Sunday , in Quail Hollow. Crazy was the person who predicted a harvest of 12.5 points against this machine.

Yet that's what Trevor Immelman's men, heavily underdogs on the eve of the tournament, have achieved as they battle hard against a well-oiled side. At 5:30 p.m., they waved the flag as the United States reached 15.5 points at the expense of poor Corey Conners.

The counter on the board final stopped at 17.5 to 12.5 in favor of the Americans.

In fact, for a while, the Internationals' hopes hung by two threads. Their fate was in the hands of Canadians Taylor Pendrith and Conners. They each lost their duel seeing their rivals celebrate. The rest was just a formality before they lifted the trophy.

“We had dug ourselves a hole until Friday night, recalled Immelman. We showed a lot of guts coming back into battle like this. At some point this afternoon, I felt we still had a chance to win. »

His men ultimately won five of the 12 games scheduled for the final round, in addition to a draw.

“This team is no joke, hammered the captain, very proud of his 12 warriors at his side. I'm tired of being the butt of ridicule. It's a real team. And we are already looking forward to the next edition. »

It must be said that the captain has encountered many difficulties since his appointment. First, the pandemic hit this competition and delayed it for a year. Then, in the last few months, LIV Golf decimated the roster by promising mountains of money to its golfers.

“We set several goals at the start of the process. We fought to reach the majority of them. Only the trophy is missing. »

“We had victory at our fingertips in 2019. We were in control and we had escaped it. Defeat is always disappointing, veteran Adam Scott said. But we don't leave Quail Hollow empty-handed. We have gained a ton of experience. This cup will fall back into our hands one day. »

The dearth of the Internationals which has persisted since 1998 will wait another two years. Who knows, the Royal Montreal may be the scene of a great sporting moment when the leaves turn red in Quebec at the end of September 2024.

In the European rout at Whistling Straits last year, during the Ryder Cup, the Americans had quickly started the festivities. The beer was flowing as the game was still far from over, but the Cup was in the pocket. This time, the suspense continued and the bottles of champagne remained cool.

Without admitting that they had felt a little scared, the Americans found shoes at their feet on this final day. Enough to keep them grounded before we celebrate.

“Our biggest challenge this week was staying ourselves and blocking out the outside noise. All over our headquarters, the captain had placed notes saying that we were the very big favorites and that we had to win, said the American star with his five victories, Jordan Spieth. He had placed all these flattering messages.

“But we all focused on our games. Nobody took the opposing team lightly. »

With unheard of punching power under hand, Captain Davis Love III applauded the involvement of his people in this 12th consecration.

“ The pressure is felt in various ways. The label of very big favorites brings a lot of pressure. I'm glad my guys ignored it by delivering good performances. ”

If the logic is respected and the Americans continue to reap good performances over the next two years, the hard core of this starry formation will land in Montreal in 2024.

The tournament will take place on the fairways of the Blue course at the historic Royal Montreal Golf Club from September 24 to 29.

Work on the greens

“ I learned that the Americans excel with their putter. I will definitely add practice on the greens. ”

This statement comes from Canadian Taylor Pendrith. The latter and his compatriot Corey Conners were the only golfers to score no points in this edition of the Presidents Cup. They lived a real ordeal on the greens of Quail Hollow. With a few exceptions over the four days of competition, their puttinghurt them. And as the ruthless Americans sensed the weakness of their prey, they showed no mercy. Luck did not turn in my favor. I missed a lot of putts that could have given me a boost,” said Conners, who once again let his chances slip away against Xander Schauffele on Sunday.

In this duel, he made 38 putts. Of four of the 18 greens, the Ontarian executed three. A statistic that does not lie to explain his four defeats of the week. Having lost confidence in his abilities in Charlotte, he still worked hard to find them before the final round. In vain. Like Pendrith, he will strive to improve this aspect of his game.

In his first appearance at the Presidents Cup, he took two of his four games to the limit of 18 holes without offering his better performance. Pendrith too.

With better putter control, a bit more chances and a less conservative game plan, both Canadians could have contributed to the scoring.

“It was a good battle. I often found myself on the mat, but I got up to fight. Ultimately, I came up short,” said Conners, who also struggled with his irons, a strong part of his game.

The ice is broken. The two golfers look to the future and the Royal of Montreal, in 2024.

Jordan Spiethfinished the tournament with a perfect record of 5 wins. A first since Jim Furyk in 2011. He participated in all the sessions of the American team. The friendly Texan especially stood out with his impeccable short game. Having faced him three times, the Canadians took notes! Sunday's game against Australian Cam Davis was not easy, especially on the fairway. But he exploded on the return by aligning three birdies in a row, thanks in particular to a long roll of 47 feet at the 13th pennant which broke his opponent's back. By offering his “best game of the season” According to him, Spieth has come back strong at this edition of the Presidents Cup after missing the 2019 selection at Royal Melbourne due to his difficulties on the courses. It's hard to believe, but on Sunday he recorded his first win in singles duels as he represented Team USA for the 8th time in his career. In his four appearances at the Ryder Cup and his three previous appearances at the Presidents Cup, he had never managed to win alone.

Si Woo Kim took pleasure in annoying the Americans over the four days of competition. Top scorer in the Internationals, the Korean pissed off Justin Thomas all afternoon on Sunday. And on the difficult 15th green, he responded brilliantly to a charge from the American by tying the hole with a delicate 10-foot putt. It was enough for him to make himself heard and ask the crowd to be quiet by putting his index finger on his mouth: ” Shh ” ! Fueling up, he was also mimicking a sign from Patrick Reed and Rory McIlroy, most notably in a fabulous Ryder Cup duel at Hazeltine in 2016. Which set his rival's behind on fire. Kim finally won her duel over Thomas by signing her third victory of the tournament.

Both Corey Conners and Taylor Pendrith took looks of Rénald « Pinson » Paré, character from La petite vie. The two Canadians showed themselves to be rather tight-lipped towards their opponents on the greens by not conceding many short putts. Justin Thomas and Jordan Spieth tasted it, like Billy Horschel, Max Homa and Tony Finau. We saw that the first two had received some of their decisions badly. JT and Spieth responded by conceding few putts. Finau looked annoyed a few times on Sunday against Pendrith. The latter was not particularly generous towards his rival, leaving him only a few very short rolls. Anyway, here's a controversial topic of discussion in the match play format.. Among the unwritten rules of the “Code of Ethics,” contestants should politely concede putts within about two feet. It all depends on the concept inside the leather. Some apply it to the length of the grip, others to the length of the shaft, between the clubhead and the grip. In the case of the Canadians, many of the putts were debatable. They can defend themselves by imitating the famous Rénald Paré: “I'm not cheap! ”

Captain Davis Love III is a regular at these team competitions in the American clan. But this time, he noticed real changes in the habits of his men. Entertainment activities have given way to treatment sessions. Outside the ping-pong tables, replaced by hot and cold baths. Settling in the locker room in the evening, he often looked for his guys. They were either in physio treatment, in the gym, in the ice baths with a teammate or on the putting green in the dark.