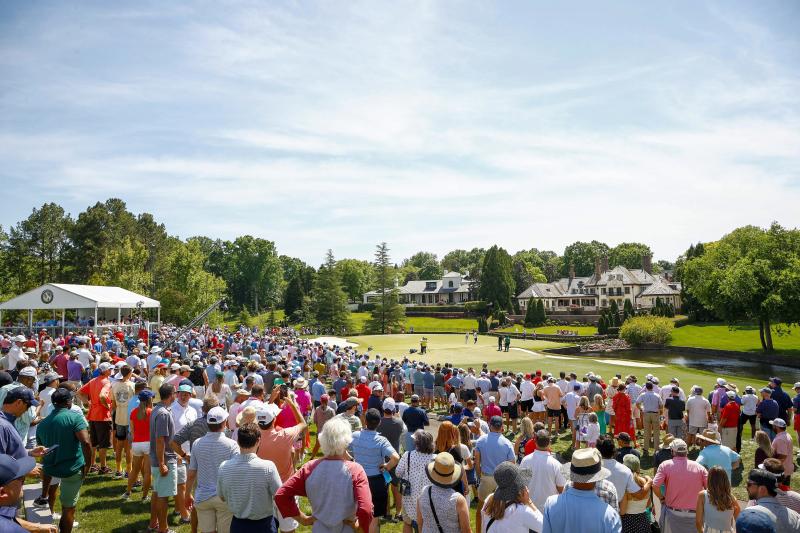 CHARLOTTE | No, it's not about the look of Joe Biden with his aviator glasses. No more than that of Donald Trump with his bright red MAGA cap. It is rather the classic and magnificent course of Quail Hollow which offers a new configuration for this Presidents Cup.

After narrowly winning over the international team on the fairways of the Royal Melbourne in Australia, the American team returns to the fold on one of its favorite courses in North Carolina.

Adapted for young and talented representatives of the star-spangled banner, this masterpiece whose architectural plans were signed by George Cobb in 1961 and since reviewed by Arnold Palmer, in 1986, and the famous Tom Fazio, in 1997 and 2016 , it is also adored by international golfers.

This famous upscale North Carolina club receives the cream of the circuit from PGA for decades. He holds no secrets from the captains and veterans of both teams.

You could argue that Justin Thomas is off to a head start as he scored his first major triumph there at the PGA Championship of America in 2017.

But for this 14th presentation of the biennial Presidents Cup tournament, the competition committee has changed the course in several places.

As explained in the infographic opposite, the famous and arduous “Green Mile” has been moved to the heart of the return. And the numbering of several other pennants has changed.

This week, Quail Hollow won't show its teeth the way it did in the 2017 Grand Slam Championship or the last Wells Fargo Championships. In 2021, this course was ranked fifth among the most difficult on the circuit.

It will be another deal this week as long, dense bermuda grass will not exceed 1.75 inches.

Due to its tenderness despite the sun that has been beating down since the beginning of the week, the 7576 yards seem even longer.

“This course is simply incredible,” expressed Thomas. It’s such a good test that is very well suited to this competition.

“We will be using our drivers and mid irons very often because the court is very long and soft. »

This course will require power and precision in many places in addition to delicacy around the greens. That's why long hitters like Americans Cameron Young and Tony Finau and Canadian Taylor Pendrith are worth their weight in gold for their respective teams.

Having finished 10th in the the most powerful hitters on the PGA Tour in 2022 thanks to his average of 316.1 yards, Pendrith is also accompanied by veteran Adam Scott who took 15th place. Among this top 20, there are also three Americans.

According to Jordan Spieth, the veteran of the American team by virtue of this fourth participation in the tournament, golfers will face two different beasts due to the climatic conditions.

“With the direction of the winds and the temperature which will fall on Friday, it will be the opposite conditions, ”analyzed the 29-year-old Texan.

In the original configuration of the course, the famous sequence of the Green Milefrom 16th to 18th is modified to spice up the spectacle of the Presidents Cup. In the history of the tournament, as 76.1% of matches end on the 16th hole, the competition committee saw fit to review the layout. The Green Mile stretches this week between the 13th and 15th pennants. A long and dangerous par 3 is at the heart of this grueling stretch that also features two long par 4s.

Before Tom Fazio made fixes to the course in 2016, the initial hole launched a round easily. The game plan has changed as a 500-yard long par-4 welcomes the golfers. If the bleachers around the first mound are impressive at the Ryder Cup, those of the Presidents Cup also make you blush. Two stories high and cramming nearly 3,000 spectators, they form an imposing horseshoe overlooking the starting area.

Three par 4s exceed 500 yards while three others approach it. That of the 13th flag is impressive since the green is located on a peninsula in the center of the vast pond. Precision and strategy are key. In addition, three of the four par 3s exceed 200 yards. In practice on Tuesday, Canadian Taylor Pendrith hit a 4-iron from the sixth tee when the goal was 225 yards out with a light breeze from the front… His playmates had opted for hybrids.