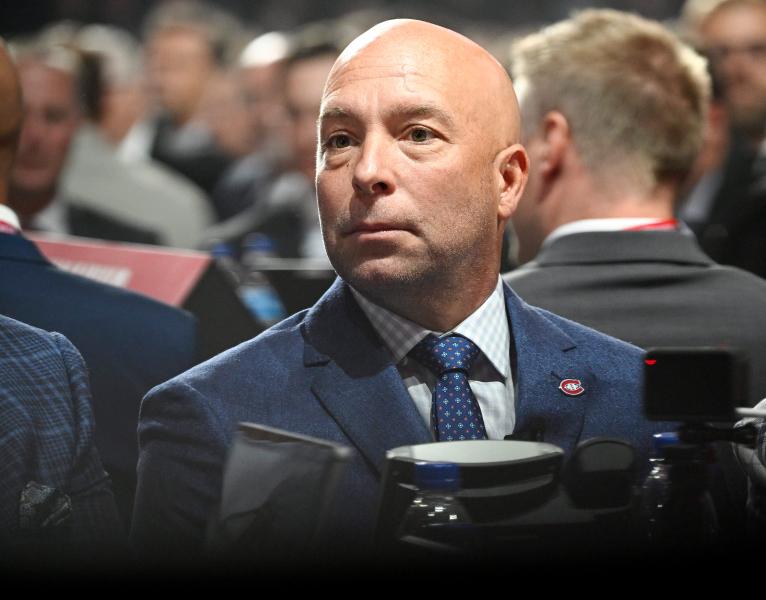 Kent Hughes made no attempt to hide the truth. Carey Price will not play this season.

At the Canadiens, we use the conditional to avoid compromising ourselves, but the events of the day confirm that the goalkeeper's state of health will not allow him to reconnect with active competition.

Did he play his last career game, it is very plausible.

And, when it is said that Kent Hughes has quickly earned the respect of his peers in his new role as managing director, he provided proof yesterday that he is a decision maker with many resources, that he is shrewd and that if a windfall presents itself, he will jump at the chance to come forward.

Hughes reaches out to Treliving

Brad Treliving needed a business partner to complete a major transaction for the Calgary Flames. Nazem Kadri had just said yes to a proposal of $49 million for seven years.

Treliving lacked the technical and financial support recommended by the salary cap. One of his counterparts had to reach out to him.

Kent Hughes, knowing that he was benefiting from a cushion of $10 million following the outcome in the Price affair, did not was quick to embark on the negotiations. Why not take advantage of a situation where the risks are not huge, but the chances of making unexpected gains are on his desk?

He made a disguised loan with, of course, guarantees required by -Treliving, in particular to relieve a debt of 6.315 M$ for one year represented by Sean Monahan.

By the trade deadline, Hughes will have the opportunity to trade the ex-Flames player while seeking to free up his payroll from contracts that do not correspond at all to the reality of the market.

In Monahan's case, don't get carried away.

First of all, he's no longer a scorer of 34 goals, a performance that allowed him to obtain a seven-year contract from the Calgary Flames at the rate of $6.375M per season.

If he had been the same player, this creative skater, or if he had shown over the past two seasons that he had found all his attributes, the Flames would not have had to hire Kadri.

Monahan's story is as follows: two hip surgeries, from first-line player to reserve player, this is the record of the last two seasons.

Can he become this talented player, recruited sixth in the amateur draft? We'll see, but that's the least of Jeff Gorton and Kent Hughes' worries.

The most important thing is to respect the business model, which includes, among other things, a chapter on payroll management.

Now Price is added to the list. Maybe not on the same terms as those who left, with the exception of Shea Weber, and who knows if Price won't go through the same process as the defender next summer, but the fact remains unless a major step in the business model materializes.

Hughes now has more leeway to tackle the file of players receiving salaries that exceed logic.

For the roster picture for next season becomes clearer with the news that Price will or will miss next season. We are embarking on a particular year and we will not rush the programs in order to have a hasty relaunch of the company. Why not take advantage of the opportunities that will present themselves during the calendar in order to improve his choice of selection next summer?

The Canadian will not make the playoffs unless there is a miracle.&nbsp ;

Therefore, sound payroll management, a development program allowing the organization's promising young players to gain more experience, offering veterans more responsibility, and ensuring that the culture of the organization will manifest itself through the leadership of the best people, these are the goals to be achieved.

So far, decision makers have been transparent.

We cannot accuse Brad Treliving of having been unemployed after being surprised by the decision of Johnny Gaudreau. Who had expected that the American winger would opt for a formation like the Columbus Blue Jackets for a lower salary than that offered to him by the Flames?

Treliving was quick to respond to the criticisms.

First, he concocted a trade with the Florida Panthers, who didn't seem interested in offering a huge contract to Jonathan Huberdeau, luring the brilliant passer to Calgary and leaving Matthew Tkachuk who no longer had any interest. to stay in Alberta.

Gaudreau and Tkachuk left and Huberdeau, Kadri and Mackenzie Weeger will wear the Flames uniform.

In exchange, is he better trained than last year? We don't know, but he has a team capable of competing at the same level as the best teams in the National League.