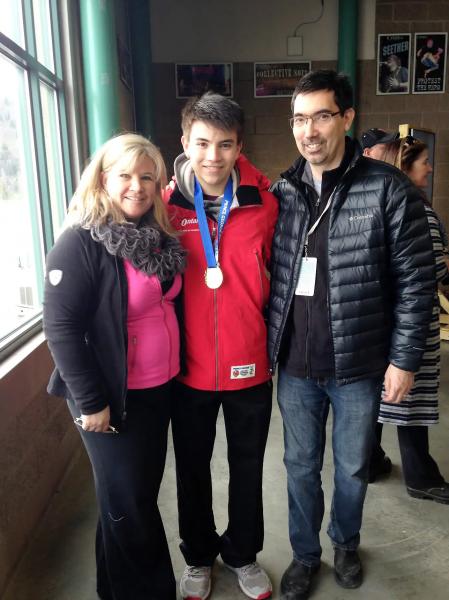 “His dream was to play in the NHL. He put that goal ahead of everything else. It is still unreal for me to know that he plays in the NHL and is now the captain of the greatest hockey team in the world. It gives me chills when I think about it. »

Amanda Suzuki, the mother of Nick Suzuki, is still floating on cloud nine. At the same time, last week, she saw her son being named captain of the Canadiens. A great source of pride for her, but also for her husband Rob and for her other son, Ryan.

At the end of the week, we contacted her to find out more about the number 14 of the Canadian. Several topics were discussed during the conversation of about thirty minutes.

We returned in particular to the days and hours leading up to the announcement of the golf tournament. Amanda and Rob knew about the rumors that had been circulating since the beginning of the summer, but Nick decided to do things on his own. Not a word to his parents.

With his mother Amanda and in the back his father Rob.

“We did not know that he had met the leaders of the Canadian, mentions Ms. Suzuki. Then, when asked about what was going on, he would always say he didn't know.

“I'm pretty sure he told his girlfriend. He was serious about the process because he took two months to think about it properly. He had no doubt in his mind that he could fulfill this role. »

Suzuki wanted to do everything not to spread the news. He waited until the day before the Habs event before telling his parents and brother Ryan.

He texted his dad first. The attacker wanted to know if his mother was with him. The latter sensed that there was something important going on.

“I decided to call him by Facetime to ask him what was going on,” says Amanda. He asked if his dad was with me and if his brother was home.

“Ryan joined the conversation. We were the four on Facetime and the suspense was unbearable. At least I felt like it was good news.

The Suzuki family members didn't fall out of their chairs when they heard about Nick's promotion.

“We weren't too surprised. We were very proud and excited for him. We knew there were other good candidates in the team, but we are happy that our son was chosen. He will do a good job for his team, his teammates and the organization.

During his hockey career, Nick Suzuki was never a vocal player. On the other hand, he has always been a unifier within his teams.

“He always had confidence in himself and his abilities, but never too much,” explains his mother. In the locker room, he was silent. His calmness set him apart from the others. He showed up for every game.

In a Lambeth Lancers uniform when he was 6 years old.

“He was showing off his skills on the ice. With his talent, he dragged his teammates in his wake. He was always ready to help them. He was loved and respected by all. »

As a matter of fact, his son's passion for hockey runs through his son's veins since his first steps.

The Suzuki brothers, Ryan, two years younger, and Nick. Ryan was drafted in the first round in 2019 – 28th overall – by the Carolina Hurricanes. He spent the last two seasons in the American League

“He was a kid who was always happy. He enjoyed sports at a very young age. His first word was bullet. He always had a mini-stick and a soft puck in his hands.

“Rob, my husband, was very athletic when he was young. He practiced several sports. I knew that my two children would be athletic one day.

Not many people know this, but Nick started playing soccer when he was 3 years old.

Nick Suzuki playing soccer at 3 years old. He excelled at this sport to the point where at age 6 he was playing with 8-year-old players.

“He was phenomenal. At 6 years old, he played in a competitive team with players who were… 8 years old. No one believed Nick was his age. »

Going back to the important announcement from the 23-year-old athlete, everyone went back to their business due to the distance. As if nothing had happened. On the other hand, it is only a postponement.

“I would have liked us all to be together during this evening, underlines Amanda Suzuki. It was not possible. On the other hand, we will celebrate Nick's appointment when we attend the Canadiens' first home game [October 12 against Toronto].

“We're going to have dinner with him after the game. »

He will learn French, says his mother

From his first press briefing as captain of the Canadiens, Nick Suzuki said a few words in French. Afterwards, he answered questions in English.

In the following hours, there was a political debate. Prime Minister François Legault, a big supporter of the Canadiens, mentioned that the captain of his favorite team should be able to speak French.

The last captains failed after making the same promise as Suzuki. They never learned French during their reign. What if the new captain changed the game?

“Nick took French and German lessons between his first and eighth year, says his mother Amanda. Nick is aware that French is important in Montreal.

“I know he will do his best to learn this language. If he says he will, he will. It is a process. He lives in Montreal and he bought a house there.

“He will improve as he speaks it. Journalists and politicians will have to be patient with him. We have to give him time.

“I'm curious to know where he will be in a year at this level.

This season, Suzuki will complete the first year of an eight-year, $63 million contract. A huge sum for a 23-year-old athlete.

“Nick has never been a big spender. He is very solid. We're not worried about that.

“For his contract, we're focused on surrounding him with the best people possible to help him manage his money. < /p>

“You have to think about putting money aside for your retirement, paying your taxes and investing in the right places. »

In love with Montreal

Nick Suzuki is the cornerstone of a rebuilding team. He is now the most popular player on the team.

A popularity that has continued to grow since he set foot in Montreal.

“ He loves Montreal, confirms his mother. I saw the extent of his popularity walking with him in the streets of Montreal.

“I am proud to say that I am his mom. Everyone I meet is always very complimentary. They always have good words for Nick. »