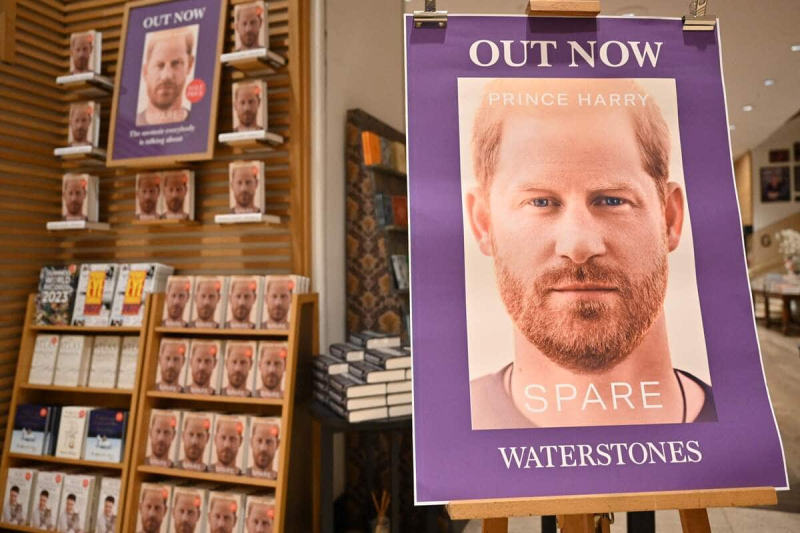 With its grand unpacking of revelations and attacks on the British royal family, Prince Harry's memoir hit bookstore shelves on Tuesday , almost three years after his break with the monarchy.

The most startling excerpts from the book – which opens with a scene following the funeral in 2021 of her grandfather Philip, husband of Elizabeth II – have already been aired in the press. They further undermined the popularity of the youngest son of King Charles III in the United Kingdom, accused of smearing for mercantile purposes an institution for many sacred.

At the WHSmith bookstore in London's Victoria station , the copies of “Spare” (“The Substitute”) left their black plastic packaging at midnight, under the objectives of journalists more numerous than customers.

First to wait, Chris Imafidon, president of an association in education, left with three copies of the book where the Duke of Sussex recounts how his brother threw him to the ground, having killed 25 Taliban in Afghanistan but also having taken cocaine or losing his virginity to an older woman.

“I really want to be able to see what his perspective is,” he told AFP.

46-year-old commercial property expert Sarah Nakana wants to 'hear her story in her own words', believing the press is 'radicalising' the British public against Prince Harry.< /p>

As soon as it opened at 8 a.m. on Tuesday, Caroline Lennon, 59, bought a copy at Piccadilly Circus in London surrounded by dozens of journalists. “I love the Royal Family, all of them, but I also love Harry. I don't like this war between them.” She also bought the audio version of the book, read by Harry: she was about to listen to it on Tuesday, back home, drinking hot tea.

Apart from English, the book is published in 15 other languages. It had already been placed by mistake a few hours Thursday on the shelves of bookstores in Spain last week, fanning its main revelations.

The divisions within British royalty appear in broad daylight, plunging this institution to planetary influence in turmoil just four months after the death of the hugely popular Elizabeth II and four months from the coronation of Charles III.

William, the heir to the throne, his “beloved brother and sworn enemy”, is his main target. But King Charles III, head of state of 15 countries, is not spared either. So did Kate, wife of William, and Camilla, Queen Consort.

In his book, Harry accuses William of knocking him to the ground during a 2019 argument over Meghan, whom Harry had married the previous year.

He also accuses his brother and his wife Kate of “stereotypes” towards Meghan, a mixed-race American actress, who “created an obstacle” to welcome him into the family.

Harry claims that certain details of private conversations with Camilla, his father's wife, published in the media “could only have been leaked” by her.

The 38-year-old prince gave several television interviews to promote and defend his book, from California where he went into exile in 2020 with his wife Meghan. He assured that he wanted to “reclaim” his story but did not want to “hurt” anyone.

Buckingham Palace did not react to the prince's statements, but comments from sources “close to the royal family” began to appear in the press which is in the majority very hostile to the “Sussex”. One of these sources told The Independent that according to the king, Camilla and William, the situation will not be able to improve because Harry has been “kidnapped by a cult of psychotherapy and by Meghan”.

Charles III, the queen consort and heir to the throne are 'trapped' according to this source: 'It is impossible to have a conversation or write a letter because of the risk that everything they say will be released into the public domain by Harry, potentially for commercial gain”. “There is a total breakdown in trust”.

In The Sun, a source claims that while “Harry spared his father”, “it only has of little importance to Charles, because he went after Camilla”, a “red line”.

The British seem tired of this princely soap opera. According to a YouGov poll, 64% of Britons have a negative image of Harry.