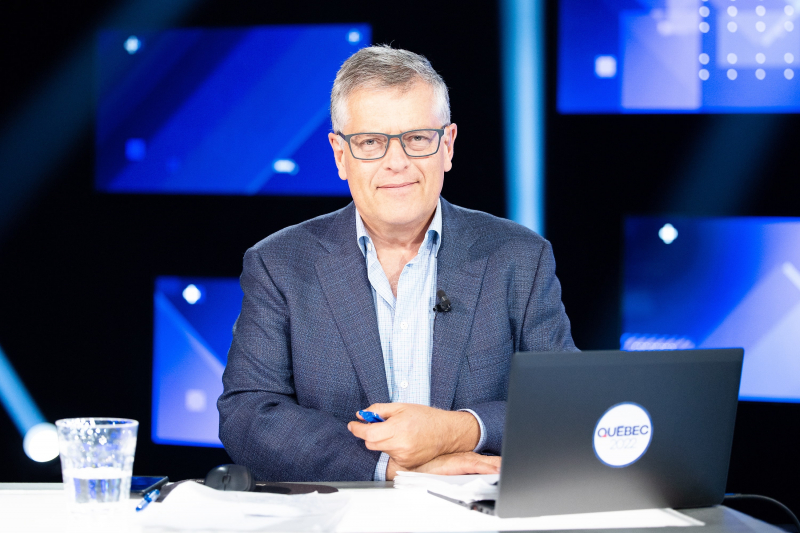 Paul Larocque, originally from Val-d'Or, considers that he, his brother André and his sister Danielle are privileged to have been raised by a happy couple, made up of his parents, Gérald and Yolande. He describes the latter as avant-garde, because they shared the aspect of egalitarian life between them.

His father, who was among other things president of the School Board, and his mother, President of the Christian Women's Movement, instilled in her in particular never to forget her origins.

Cardinal Jean-Claude Turcotte, with his simplicity, and Jean Lapierre, with his loyalty, influenced his life. Jean reminded him to never forget the human aspect of his work, because the politicians we criticize also have wives and children around them.

Until the age of 13, we lived in Val-d'Or before moving to Sainte-Geneviève de Pierrefonds.

That is to say that we played hockey in the streets of the municipality of Val-d'Or, which were so wide that we thought we were playing according to European dimensions.

You liked going out in nature, playing baseball and hockey.

My classmate, Bernard Charbonneau and I liked baseball and hockey, a sport in which I was not good . As for hiking in nature and fishing with my grandparents, these are unforgettable moments.

You broadcast your first short story when you were 6 years old.< /p>

On November 22, 1963, US President John F. Kennedy was assassinated. I was barely 6 years old, and I stopped at every house on my street to announce the death of Mr. Kennedy.

You followed the various political conventions at the 8 years old.

I can see myself sitting in front of the black and white television watching the convention of the Union Nationale or that of the Créditistes. Also, I liked to read for information and to follow the debates.

Your uncle Guy gave you your passion for politics.

I was part of his political organization when I was only 12 years old. My cousin Pierre and I were flying over the city in a seaplane as we tossed party flyers to the ground. Times have changed.

Your boss told you twice to cut your hair.

Before making my debut at Steinberg de Pierrefonds as a packer, my employer told me to have my hair cut because it was too long for his taste. When I came back, he told me to go back to the barber, because they were still too long. Afterwards, I started my new job.

Your father was a military enthusiast.

I was 8 years old and on Sunday morning we were listening to military music. Needless to say, our family vacations often included visits to military sites.

My brother and I thought it was pretty good early in the morning until he told us it was unfortunate because he had three tickets to attend the Canadiens game which was in the playoffs. We got up immediately.

Was this your first visit to Montreal?

What a beautiful moment! From the Porte-du-Nord, my eyes kept looking everywhere. Once arrived in Laval, my enthusiasm started with skyscrapers that I saw for the first time in my life. Then, Montreal amazed me with its grandeur.

Tell us about your presence at the Montreal Forum.

Even today, I can confirm that I was more moved the first time I went to the Forum than when I visit to St. Peter's Basilica in Rome.

Twelve hours by car to see the Canadian at work.

My father drove for 12 hours, round trip, Val d'Or-Montreal, so that I could see my idols Jean Béliveau, Serge Savard, Yvan Cournoyer, Jacques Lemaire and Rogatien Vachon.

My parents had rented a chalet in Pointe-Calumet for two unforgettable weeks, I had then discovered the whole world without having to travel everywhere in the world.

You were only 15 when you went to Cégep de Jonquière.

At the time, I had not done my seventh year in the new Quebec school program. So I went to join my brother, and luckily he was there to help me adapt to my new life with students who were sometimes adults.

Insurance cars were more expensive than your car.

Indeed! My first car was a used red Comet whose rear bumper was attached with wire, which made it special.

On two occasions, Michel changed my life when he was director of information at CJMS. He gave me a taste for fishing again and he assigned me as parliamentary correspondent for the National Assembly.

Which political congress did you find the most intense?

My dear friend, the last Conclave in Rome.

Who would you have liked to meet?

Two great leaders, General Charles de Gaulle, who stood tall, and Winston Churchill, who was never fully appreciated by the English aristocracy until they needed him in time. of war.

I am so attached to my daughter Elizabeth, an artist at heart who owns a magnificent voice and which is also the pride of my life. My wife, Mylène Béliveau, is a woman who leads an exceptional life. She is always there for me, however, it is not always easy for her to analyze my work, which she does with unparalleled professionalism.

Do you want to add another thought.

I apologize, but I must point out that my daughter and my wife play an important role in my career. However, I miss my friend and mentor, the late Jean Lapierre.