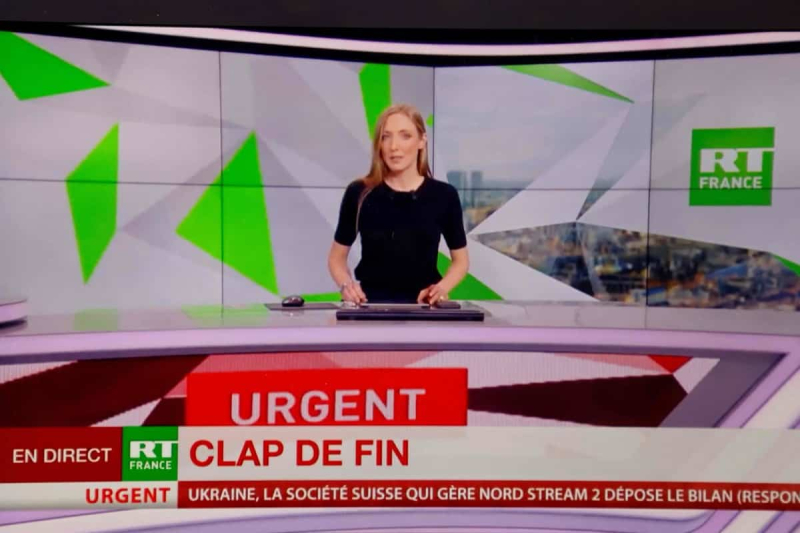 Denouncing an act of “censorship”, RT France, the French branch of the Russian channel RT suspended in the European Union, announced on Saturday its closure following the freezing of its assets, Moscow promising measures of retaliation against French media in Russia.

France was the only EU member state to host an RT subsidiary on its soil, where it had been present since 2017.

“After 5 years of relentlessness, the authorities in power have therefore achieved their ends: the closure of RT France (…) The General Directorate of the Treasury has decided to freeze the bank accounts of RT France, making it impossible to continue our activity”, announced on Twitter Xenia Fedorova, president and director of the chain.

This decision follows the freezing of the bank accounts of the chain, made public the day before.

A few hours earlier on Saturday, Moscow reacted to the freezing of the accounts by promising “retaliatory measures against the French media in Russia”.

“They will be remembered if the French authorities do not stop terrorizing the Russian journalists,” warned a source within Russian diplomacy, quoted by the Russian news agencies Ria Novosti and Tass.

Questioned by AFP, the French Ministry of the Economy explained on Friday that the assets of the chain had been frozen in application of the most recent European sanctions and not at the direct initiative of the French State.

Unlike the initial sanctions decided after the Russian military intervention in Ukraine in February 2022, those taken in December provide for an “asset freeze” of the targeted entities, said this source.

Among these entities figure “ANO TV Novosti, parent company owning 100% RT France”, which therefore explains the freezing “of the assets of RT France”, she continued.

Accused of being instruments of “disinformation” by the Kremlin, the media Sputnik and RT (including its French-language version RT France) have been banned from broadcasting in the EU from March 2, 2022, on television and on the internet, following an agreement of the Twenty-Seven shortly after the start of the invasion of Ukraine.

Seized by RT France, European justice confirmed this decision in July. This initial sanctions package only banned the broadcast of RT's content in the EU, not the production itself.

Until now, RT France therefore continued to produce and broadcast content, which could be consulted despite the ban via a virtual private network (VPN), a service allowing you to browse the web by circumventing blocking.

Xenia Fedorova rejects the accusations against the channel as a whole, assuring in her press release on Saturday that she treated the war in Ukraine with “vigilance” and in a “balanced manner”. And to denounce an “arbitrary measure”, a “political decision, outside of any previously established legal framework, this is what is called censorship”.

“The question arises of the future of media pluralism in France, of their representativeness, of their independence – at least moral – of the freedom of thought and expression in our society”, continues Ms. Fedorova.

She explains that 123 French employees, including 77 press card holders, risk today “not being paid their salary for the month of January and will lose their jobs by the act of the prince”.