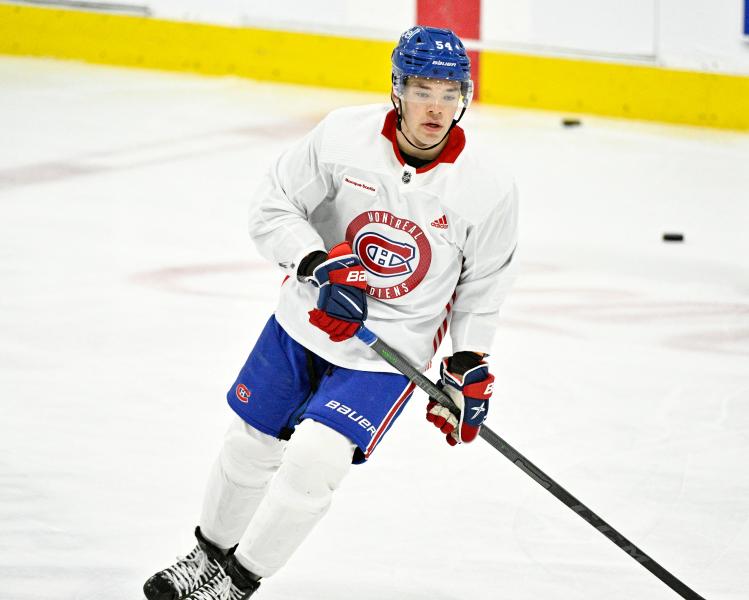 The business model is well respected at the Canadiens.

In the recovery plan concocted by the Jeff Gorton/Kent Hughes duo, it is well said that 'we give young skaters, those who demonstrate that they have the qualities required to participate in the adventure, every opportunity to be part of the solution.

Kaiden Guhle, Arber Xhekaj, Jordan Harris and Juraj Slafkovsky reflect the new company policy well. They have taken an important step. Guhle distinguished himself throughout the preseason game schedule by his intelligence, his vision of the game and also by his leadership on the ice.

Xhekaj left his calling card last year and he lived up to what he sold to the decision makers of the organization by showing tenacity, provoking the opposition and adapting quickly to the rhythm of hockey professional. We gave it to Laval yesterday, but it was only a formality in order to respect the salary cap. He'll be with the Canadiens today.

Harris is a talented, calm defenseman who faces challenges with confidence and determination as Slafkovsky finds himself exactly where he needs to be, with the big team.

There will be further roster changes due to the injured list. Except that the leaders kept their promise. We are embarking on a new management. Important decisions have been made in order to push the recovery program forward. They had specified that they would favor the most talented, which is what they did.

It is not said that at some point a stay in Laval will not be on the agenda, but it is clear that we have just identified those who occupy the top of the organization chart of the best hopes.

Justin Barron is not far away, neither is Rafaël Harvey-Pinard. We'll see Otto Leskinen, Cayden Primeau.

But, for now, we've rewarded the best.

A message for veterans

Some veterans must interpret the latest decisions as a message inviting them to a serious examination of conscience.

The competition will therefore be fierce inside the locker room. Especially on the blue line.

However, that does not mean that Jonathan Drouin, Joel Armia and Mike Hoffman avoided the worst. That doesn't mean that Evgenii Dadonov will remain in the team's entourage for long.

The preseason game schedule was a platform that provided St. Louis and his group with the opportunity to draw up an even more in-depth assessment of the workforce.

Therefore, we wanted to respect the recovery plan exactly.

The Habs find themselves in a situation where they have time to put the established program into practice in order to achieve the objectives. He must do this by making sure he has the elements to make the most important decisions with peace of mind. Reducing the margin of error by taking the time to properly analyze the workforce was essential. We trusted the young hopefuls by providing them with every opportunity to exploit their talent. The CH finally chose the most talented.

Starting tomorrow, we are embarking on another phase of the recovery plan. As Kent Hughes clarified last week, we will have to pay close attention to everything that is happening across the league. Which teams are struggling in terms of payroll? What are the formations looking for defenders? Keep an eye out.

A raise occurs with young players, but also, if we can make deals through a transaction, if we can take advantage of a unique opportunity in the free agent market, we must react.

Jeff Gorton cleaned up New York, but he had some hidden cards and that's why the plan has worked so far.

Let's not forget that the Rangers were in a period of recovery when Gorton acquired Adam Fox, who became, in the space of a year, an elite defender. Gorton also took advantage of a combination of circumstances to attract a player like Artemi Panarin to the island of Manhattan.

The process has begun for good.

There are matches where it will be difficult, except that we realize that the group of administrators in place will know how to deal with adversity and will not panic at the slightest opportunity.

Now it's Kent Hughes' turn to show off his magical skills or, if you prefer, to demonstrate that he knows how to play his cards well.

The general manager will not have to find nearly $10.5 million in order to meet the salary cap. In other words, he will not have to exchange veterans for the purposes of the cause. Carey Price will be out and Paul Byron will also be on the injured list for a long time.

Hughes is clear-sighted. His list of players absent for a long period exceeds 25 M$.

So, there is no problem. He will still have to juggle a few staff.

In total, with their base salary, the four young recruits joining the team already appear on the CH employees.

Where it could get complicated is if Jonathan Drouin, Mike Hoffman and Joel Armia ever found themselves in the starting lineup. And, again, the financial exercise would not require much thought.

The only problem is that a CEO does not like to be near the salary cap. He always wants to have space to maneuver better if ever the prospect of making a good shot arises.