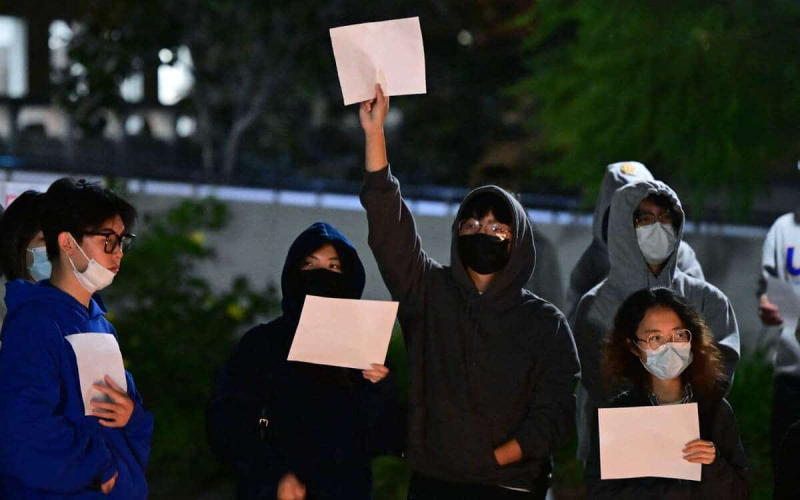 The Chinese people are angry: the extreme measures put in place by the regime to curb the evolution of the COVID-19 pandemic, mixed with a violent crackdown campaign by the authorities, have succeeded to exhaust the patience of many citizens who have chosen to occupy public space to show their discontent.

Censorship, very present in China, tries to erase the traces of these revolts on social networks. But nothing works. Freedom activists manage to circumvent the iron curtain in order to show their reality to the whole world.

The demonstrations, the most intense since 1989, were thus able to spread to several major Chinese cities such as Beijing, Wuhan, Shanghai, Nanjing and Chengdu.

The situation now is impacting Chinese markets and appears to be very serious.https://t.co/2HShAxRuhA pic.twitter.com/q65EIMJ5ES

How do they do it, when the Chinese government is stepping up its efforts to crush all forms of dissent?

Leaving traces at all costs

< p>The movement protesting sanitary measures gained momentum last week with the fire at a residential building in Ürümqi, located in the Xinjiang region. The event, which killed a dozen people, inflamed public opinion.

Images, showing the fire trucks standing at a ridiculous distance from the building, began to be broadcast on the networks. The latter were so far away that their jet of water did not reach the flames.

Urumqi, Xinjiang , roadblocks were placed in the community to prevent residents and vehicles from entering and exiting, making it difficult for firefighters to put out the fire even if they tried their best.#TheGreatTranslationMovement pic.twitter.com/3nIKH6YeYT

In case you wonder what caused the sudden anger in China, it was viral videos like this.

10 ppl died in a high-rise fire in Urumqi because they weren’t able to get out of their apartments due to lockdown measures.

It should be noted that several residents of the building were Uyghurs, an oppressed minority in China.

Internet users then condemned the zeal of the government in its application of anti-COVID measures. These videos were viewed tens of thousands of times on Weibo and WeChat, Chinese social networks, before being deleted by censors.

Weibo has been censoring videos of what’s happening in Urumqi. Protests are reportedly going on. pic.twitter.com/JT9oCBblZm

In another attempt to quell popular discontent, Chinese social networks have deleted searches around the words “Xinjiang” and “Beijing”. The phrase “I saw it” has also been erased.

Remember when "Beijing" got censored on Sina Weibo due to one man's bridge protest in the capital before the National Congress?

Shanghai is now censored after this weekend's protests. Weibo now says only 974 posts mentioning "Shanghai" have been made since the beginning of time pic.twitter.com/r7ZE6PKqlQ

But the damage was already done. Many users have managed to save the original posts and have used a virtual private network (VPN) to re-share them on government-banned Western platforms, such as Twitter or Instagram. In one week, Twitter went from 150th to 9th among the most downloaded applications in China, according to TechCrunch.

Some also manage to circumvent the censorship present on Chinese sites by using coded language. Internet users will express themselves using irony and euphemisms. This strategy was also used during the #MeToo movement, where women used the keyword “rice bunny” to circumvent censorship.

However, the authorities quickly understood these schemes and are trying to all the means to curb popular discontent. Accounts, used by Beijing, shared pornographic images to dilute activists' posts. The cuts led by Elon Musk, the platform's new owner, make it easy for fake news to spread.

A lawyer, questioned by a journalist on the spot, claimed that the Chinese regime uses data from telephones and social networks to trace and arrest protesters.

< p lang="en" dir="ltr">From @WSJ: Amid the ongoing protests in #China, a lawyer who provides legal support to protesters said she suspects that the Chinese police were using data from mobile phones and social-media accounts to track down protesters. https://t.co/DHu3XPi7Nv

“Police are stopping random people on the street to check their phones,” journalist William Wang told BBC World. If they have installed apps like Twitter or Telegram, they are forced to delete them. They must also give their personal information to the authorities.”

On @BBCWorld today, I talked about the increased police presence seen in major cities across #China since yesterday and how authorities have now stepped up their surveillance against citizens. People with Telegram and Twitter on their phones have to leave info with police. pic.twitter.com/N8CBxOpqHS

Police checking a passenger's phone on the subway in #Shanghai. https://t.co/qk3E5zGHXg

The phenomenon worries the regime so much that students at Tsinghua University in Beijing have been instructed not to speak to journalists who have not been approved by the government.

Meanwhile, Tsinghua University in #Beijing has asked students not to be interviewed by foreign journalists whose identities can't be verified. https://t.co/61YUOSl4LO

“Cyber-surveillance in China is very strong, explains this journalist. One of my sources told me that she received a call from the government asking her to stop sharing information.”

How powerful is #China's surveillance state amidst the protest. A thread: a source that I've been in touch with over the last few days just texted me, telling me that he received two calls from China's cyber police, warning him to stop spreading information about …

The latter also adds that many people have deleted the discussions they had had with him.

Since last night's news of police in cities across #China beginning to randomly check people's phones on the street, several sources have deleted our chat histories as a way to avoid being arrested or having their personal information recorded by authorities.

They use the blank sheet to illustrate “silenced opposition”. This gesture can also be interpreted as a way of taunting the authorities. “It's a way for them to say 'Are you going to arrest me for holding an empty sign?'” BBC journalist Stephen McDonell wrote on Twitter.

You’ll notice anti-#ZeroCovid protestors holding blank sheets of paper in #China. This is not only a statement about dissent being silenced here, it’s also an up yours to the authorities, as if to say ‘Are you going to arrest me for holding a sign saying nothing? pic.twitter.com/zY383aruRu

Beijing is trying to discredit this popular discontent by claiming that the protests are driven by “foreign forces”.

Influencers paid by the government claim that protesters are using blank sheets to allow Western countries to write the messages they want via photomontages.

Several conspiracy theories, fueled by agents of the regime, circulate on social networks. Some of them even claim that Hong Kongers were paid by the CIA to sow discord in the country.

Even though lacking evidence, Chinese influencers have not stopped promoting conspiracy theories on foreign power's involvement.

One of the “evidence” repeated by many has been that foreign media are reporting on it and putting the story on their front page . pic.twitter.com/3qHW32amBR

Some influencer wrote a viral article "exposing" foreign forces behind the protest. Other than what I collected in this thread, additional "evidence" includes: Someone heard people were paid to protest; protesters used candles; Christians were there.https://t.co/6JA3DBsscC

They also claim that the candlelight vigils, held in honor of the victims of the Ürümqi fire, are Western initiatives since the Chinese “don't don't use candles. The “real ones” use flower crowns.

A lone protester light up candles in #HKU to commemorate the victims of the Urumqi fire and to show solidarity with the protests across China and aboard. pic.twitter.com/NQjo7YBCGV

Recall that this is not the first time that China blames the West for its social unrest. In 2019, she accused a US consul and a New York Times editor of leading pro-democracy protests.