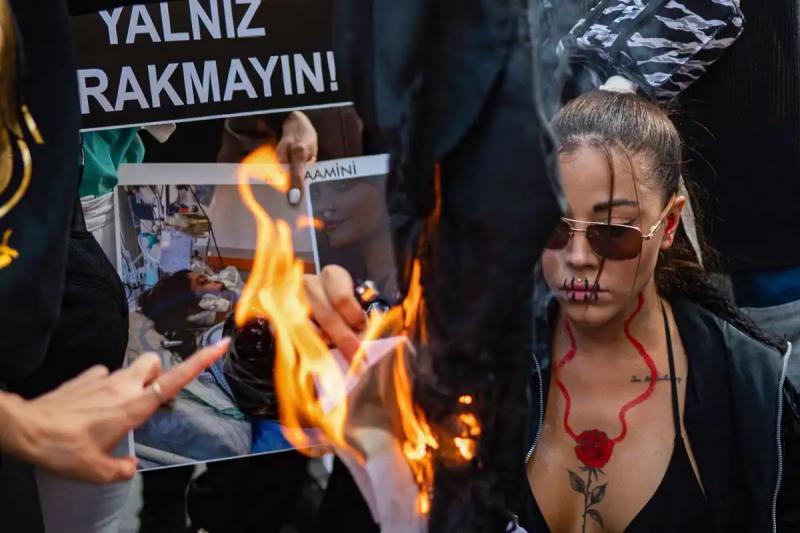 Iran stepped up pressure on celebrities and journalists on Thursday following the wave of protests sparked in the country by the death of Mahsa Amini days after the young woman was arrested by the morality police.

Filmmakers, athletes, musicians and actors supported the protests, including the national soccer team whose players wore black tracksuits during anthems performed ahead of a match in Vienna against Senegal.

< p>“We are going to go after the celebrities who blew on the embers” of the “riots”, said the governor of the province of Tehran, Mohsen Mansouri, quoted Thursday by the news agency ISNA.

< p>The protest movement, the largest since 2019, was sparked by the September 16 death of Mahsa Amini, a 22-year-old Iranian Kurd, three days after her arrest by the vice squad.

It she was accused of having violated the strict dress code of Iran which notably obliges all women to wear the Islamic veil.

Iran's justice chief, Gholamhossein Mohseni Ejei, also lashed out at celebrities: “Those who became famous thanks to the support of the system, during the difficult days, joined the enemy instead of being with the people. All must know that they must reimburse the material and spiritual damage caused to the people and the country,” he said.

For his part, Iranian President Ebrahim Raisi warned that despite “the pain and sorrow” caused by Amini's death, public security was “the red line of the Islamic Republic of Iran” and that “no one was allowed to break the law and cause chaos.”

On Thursday, a journalist who had covered Mahsa Amini's funeral was arrested, her lawyer said. This arrest came after that of journalist Nilufar Hamedi, of the daily “Shargh”, who went to the hospital where Mahsa Amini was in a coma and helped to publicize the case.

According to the Iranian news agency Fars, “about 60” people have been killed since the protests began on September 16, while the Oslo-based NGO Iran Human Rights reported a death toll of at least 76 dead.

Iran blamed the protests on outside forces and launched cross-border missile and drone strikes on Wednesday that killed 13 in the Kurdistan region of Iraq, blaming armed groups based in this region from fueling unrest.

Iran on Thursday summoned the French charge d'affaires, denouncing Paris' “interference” in its internal affairs after Paris condemned the “violent repression” of protests.

Protests in solidarity with Iranian women have taken place around the world, with rallies planned in 70 cities on Saturday.

In Afghanistan, the Taliban on Thursday dispersed a rally in front of the Iranian embassy in Kabul of Afghan women who had come to support Iranian demonstrators, whose struggle they say they share. Taliban forces fired into the air and attempted to hit the protesters with rifle butts, according to AFP journalists.

In a statement to the Fars news agency, intelligence officers of the Revolutionary Guard Corps, Iran's ideological army, said they had arrested 50 members of “an organized network” behind the “riots” in the Shiite holy city of Qom.

For its part, Amnesty International criticized the “widespread practices of unlawful use of force and ruthless violence by security forces” in Iran.

The NGO cited the use of bullets bullets and metal balls, beatings and sexual violence against women, all “under the cover of continued and deliberate disruptions of the internet and mobile phones”.

“Des dozens of people, including children, have been killed so far and hundreds injured,” said Agnès Callamard, secretary general of the NGO are headquartered in London.