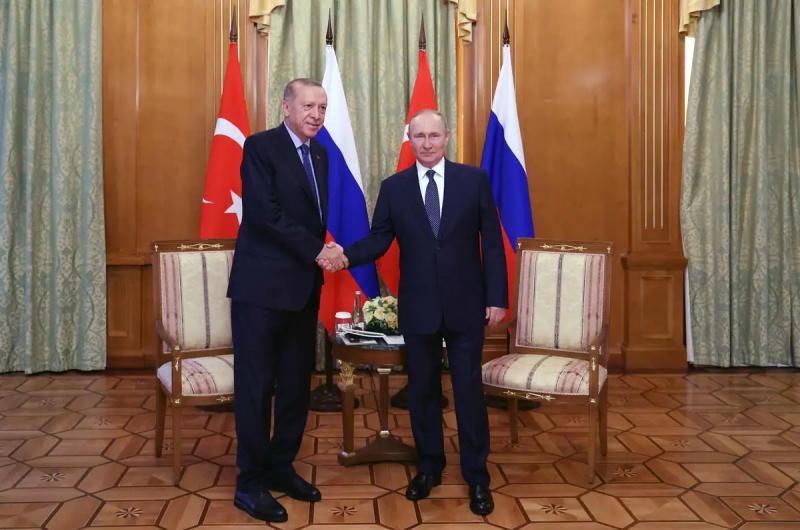 MOSCOW | Russian President Vladimir Putin and his Turkish counterpart Recep Tayyip Erdogan agreed on Friday to strengthen energy and economic cooperation, after their meeting in Sochi (Russia), on the shores of the Black Sea, indicated the Kremlin in a statement.

The two leaders agreed to “strengthen trade” between their countries and “to meet mutual expectations in the field of economy and energy”, according to a joint statement by MM . Putin and Erdogan, published by the Kremlin.

They notably advocated the implementation of “concrete measures” to strengthen cooperation in the fields of transport, agriculture, industry and finance, as well as in tourism, according to the same source.

On the political side, the two leaders stressed “the crucial importance of sincere, frank and trusting relations between Russia and Turkey to ensure regional and international stability”, the statement said.

At the start of their meeting in the Russian resort of Sochi, the master of the Kremlin thanked the Turkish president for his efforts which made it possible to find an agreement between Moscow and Ukraine on the deliveries of Ukrainian cereals from the Ukrainian ports of the Black Sea.

“Thanks to your direct involvement and the mediation of the UN Secretariat, the problem of Ukrainian grain deliveries from the Black Sea ports has been resolved. Deliveries have already started, and I would like to thank you for that,” he said.

After their meeting, the two presidents agree that the deliveries of Russian gas to Turkey are “partially paid for in rubles”, announced to the press the Russian Deputy Prime Minister, Alexander Novak, welcoming a “new stage and new opportunities”.

Russia has been seeking for months to impose its currency in international settlements against the euro and the dollar, against the backdrop of unprecedented Western economic sanctions against Moscow due to the conflict in Ukraine.

Mr. Erdogan had already said on Friday that he hoped that his meeting with Mr. Putin would “open a very different page in relations” between Russia and Turkey.

The Turkish president had also said he wanted to speak with his Russian counterpart about Syria, where Ankara is threatening to launch a military operation against Kurdish groups it calls “terrorists”, which Moscow opposes.

“Discussing developments in Syria on this occasion will allow appease the region. Our solidarity in the fight against terrorism is very important”, underlined Mr. Erdogan.

The Turkish Head of State had also said that he wanted to ensure that the construction of the nuclear power plant in Akkuyu by Russian nuclear giant Rosatom in southern Turkey is said to be on schedule, as litigation risks causing delays to the mega-project.