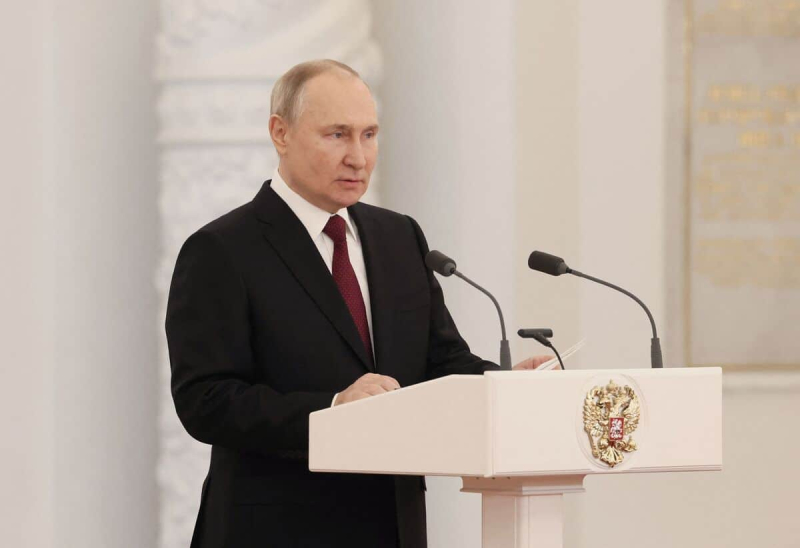 Vladimir Putin promised Thursday to continue strikes against Ukrainian energy infrastructure, a response according to him to attacks in Kyiv, particularly in Crimea, an annexed peninsula whose vulnerability Moscow has admitted.

The remarks come as Moscow and Washington carried out a major prisoner swap at Abu Dhabi airport in the United Arab Emirates on Thursday.

Presenting medals to soldiers and other personalities on Thursday in the Kremlin, Vladimir Putin for his part swept aside Western criticism of the Russian strikes which in recent weeks have left millions of Ukrainians without electricity, even without water and without heating, in the middle of winter temperatures.

“Yes, we are doing it, but who started it?” Putin said, presenting the bombings as a response to the explosion that damaged the Crimean bridge built by Russia in early October and other attacks attributed to Kyiv.

He also criticized Kyiv for having “blown up the power lines of the Kursk nuclear power plant”, a Russian region bordering Ukraine, and for “not supplying water” the pro-Russian separatist stronghold of Donetsk, in the east of the country, has been the target of deadly Ukrainian bombardments for the past three days.

“From our side, as soon as we start doing something in response, the noise, the clamor, the crackle spreads throughout the universe,” Putin quipped.

“It will not hinder us to fulfill our combat missions,” he added.

Earlier Thursday, the Kremlin had admitted to being vulnerable to Ukrainian attacks in Crimea , peninsula annexed in 2014, after several attacks attributed to Ukraine far from the front.

In recent days, several Russian military bases, including two located some 500 kilometers from Ukraine, as far as the Russian capital Moscow, have been targeted by drones.

On Thursday again, a drone was shot down by the Russian fleet in Sevastopol in Crimea, local authorities said, a sign of the continuing risks to the annexed peninsula that Kyiv has vowed to retake.

These attacks, combined with a series of Russian reverses in Ukraine, seem to testify to the fact that, nine months after the start of the offensive, Russia is struggling to consolidate not only its positions, but also to protect its rear bases.

In Crimea, “there are risks, because the Ukrainian side continues to follow its line of staging terrorist attacks,” Kremlin spokesman Dmitry Peskov said Thursday.

< p>But the fact that the drone was shot down “shows that effective countermeasures are being taken,” he said.

Russia's Black Sea Fleet, based in the port of Sevastopol, was hit in late October by what authorities said was a “massive” drone attack, which damaged at least one ship.

And in early October, the bridge connecting the peninsula to Russia was partially destroyed by an explosion that Moscow attributed to Ukrainian forces.

It is in this context that the authorities installed by Moscow in the Crimea announced the construction of fortifications and trenches, especially since the Ukrainian forces took over part of the border region of Kherson in November.

With front lines at risk of freezing with winter, Ukrainians are increasingly turning to drones to strike Russian bases in the rear, away from the front, while Russians bomb Ukrainian energy infrastructure, even if it means plunging civilians into the cold.

According to the Ukrainian operator Ukrenergo, the electricity system was still the victim of a “significant deficit” on Thursday after the last Russian strikes on Monday.

A sign of tensions in Crimea, the Russian security services (FSB) have Thursday announced the arrest of two residents of Sevastopol suspected of having transmitted information to Ukraine on military targets.

The Ukrainian army has in recent weeks moved closer to Crimea thanks to a victorious counter-offensive which enabled him to retake the strategic city of Kherson, in the south of the country, on November 11.

In this area, where the bulk of the forces of the two camps are separated by the Dnieper river , the situation remains tense, with regular Russian strikes on Kherson.

Oleksiï Kovbassiouk, a resident of the region met by AFP, crosses the river despite the risks and the freezing temperatures to help the stuck inhabitants on the left bank, occupied by the Russians, to flee.

“I've already had two bullet holes in my boat,” he says.