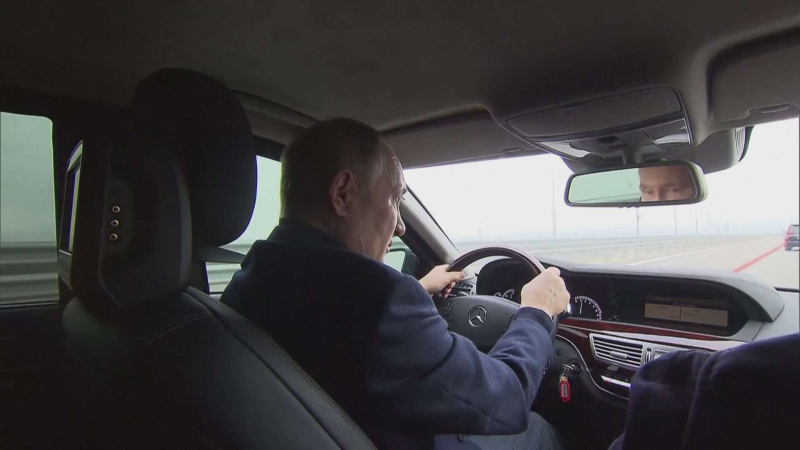 Russian President Vladimir Putin visited the partially destroyed Crimean Bridge in October, his first visit to the annexed peninsula since the start of the offensive against Ukraine, the Kremlin announced on Monday .

The Russian presidency has published a video showing Mr. Putin driving a Mercedes brand vehicle driving over this bridge which connects Crimea, a Ukrainian peninsula annexed in 2014 by Moscow, to the territory Russian.

The viaduct, which spans the Kerch Strait, was damaged in October by a powerful explosion attributed by the Russian authorities to a truck bombed by the Ukrainian secret services.

“Vladimir Putin rolled over the road to the Crimean Bridge, which was repaired after the explosion in October, and spoke with workers,” the Kremlin said in a statement.

During the trip, Deputy Prime Minister Marat Khousnullin, visible in the front passenger seat, “reported to the head of state on the progress of repair work,” the Kremlin added.

This is Mr. Putin's first trip to Crimea and to a site directly affected by the offensive he ordered in Ukraine since the start of the conflict in late February.

The Crimean bridge explosion, which killed three people, caused a shock in Russia: the fact that such a crucial infrastructure and such away from the front could be damaged represents a snub for Moscow.

This concrete bridge, built at great expense on the orders of Vladimir Putin to connect the annexed peninsula to Russian territory, serves in particular to the transport of military equipment of the Russian army fighting in Ukraine.