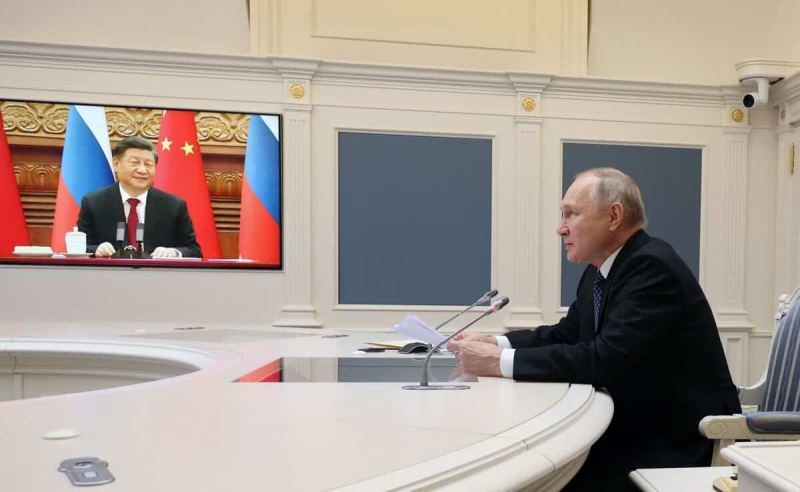 Russian President Vladimir Putin said on Friday he wanted to strengthen military cooperation with China, during a meeting by videoconference with Chinese leader Xi Jinping, praising the resistance of Moscow and Beijing in the face of “pressure” Western.

“Against the backdrop of unprecedented pressure and provocations from the West, we are defending our principled positions,” Putin said.

< p>According to him, “the coordination between Moscow and Beijing on the international scene […] serves the creation of a just world order based on international law”.

“Military cooperation and technology that contributes to the security of our countries and the maintenance of stability in key regions has a special place” in the Russian-Chinese cooperation, he stressed.

Then, the president stressed that the two powers “intend to strengthen cooperation between the armed forces of Russia and China”.

Faced with heavy Western sanctions because of its offensive against Ukraine, Russia has been seeking in recent months to strengthen its ties with Asia, in particular with China, which has, however, refrained from supporting the Russian attack against its neighbor.

M. Putin further announced on Friday that his counterpart would come to Russia “in the spring” of 2023 for “a state visit”, which will be a first since the start of the Covid-19 pandemic.

Moscow and Beijing present themselves as a geopolitical counterweight to the United States and its allies. They have conducted several joint military exercises in recent months, including naval maneuvers this week in the East China Sea.

Russia is also working to increase gas supplies to the Chinese economy , a major consumer of hydrocarbons, especially since the Europeans are determined to get rid of their Russian energy dependence.