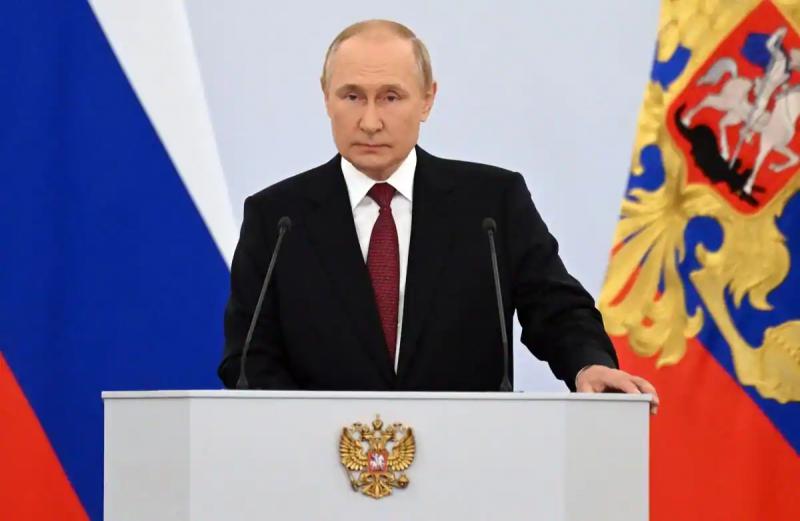 ** Warning: some comments transcribed in this article may shock. **

Long before the start of Russian aggression in Ukraine in February, conspiracy junkies n only had eyes for Putin. It is that the speeches of the Russian dictator and the conspiratorial cliques now come together enormously.

The hatred of liberal values ​​is the basis of the speeches of the Russian dictator. This is also often the case for the remarks of members of fairly large groups, ranging from anonymous on the internet to certain commentators on the American chain Fox News.

At the sight of the speech of this Friday, September 30 formalizing the annexation of the 4 Ukrainian regions, let us compare certain “conspis” “affirmations” with the recent remarks, transcribed here in French, of the Russian president.

“We will defend our land with all the powers and means at our disposal”, explains the Russian president in his speech, peppered with references to the defense of “historic lands”.

“The battlefield to which fate and history have called us is the battlefield of our people, of historical great Russia,” he adds. -he.

“I want the authorities in Kyv and their true masters in the West to hear me so that they remember it. The inhabitants of Lugansk and Donetsk, Kherson and Zaporizhia become our citizens”, he concludes on the subject

The conspiracy circles here and there share the same lines of this speech. One of the personalities most often quoted to illustrate this assertion is the American neo-Nazi activist, close to the representative Marjorie Taylor Greene, Nick Fuentes.

White nationalist Nick Fuentes encourages prayers for the brave Russian soldiers who are fighting to "liberate Ukraine from the Great Satan and from the evil empire in the world, which is the United States." pic.twitter.com/RdVrXHCapn

He often justifies Russia's right to regain control of “its lands” and “liberate Ukraine” . Yesterday he even went so far as to welcome the recent Russian “annexations”.

Designating the West as enemy leads some commentators to point the finger at the radicalism of Putin's speech.

To calmly read Putin's speech yesterday translated into French, one seems to be reading the speech of a radical Islamist leader who denounces “the decadence of the West”

The Russian president, in his speech on Friday September 30, argues that we (the West) “have gone into denial moral standards,” adding that “it is a reversal of faith” taking the form of “pure Satanism.”

He continues: “Do we really want to have parent number one and parent number two”, that there are supposedly genders in addition to women and men, and that children have the possibility of undergoing sex change operations? sex?

The affiliation of modern Western values ​​with Satanism is not new to the Russian intelligentsia. It was, however, one of the most talked about talk throughout the day on September 30 in Moscow.

I've tried to explain to people in the West what is actually happening in Russia but seeing is believing.

This is from yesterday's state-organized rally in Red Square. Remember, nothing gets said at these without approval from the top. The very top. pic.twitter.com/aR12ywP1RB

These remarks are quite similar to those at the base of the speech of “QAnon”. For followers of “Q”, our leaders in the West are all part of a great “pedosatanic cabal” seeking to dominate the world and control our actions, gestures and thoughts. Leaders like Donald Trump, or Vladimir Putin, would then be the only ones to oppose this infamy.

The movement is also recognized for its most virulent transphobic discourse. Various analyzes have shown since the cult's outbreak that LGBTQ+ causes are associated with the nightmarish “pedosatanic cabal” that allegedly rules the world.

At the start of the war, various dignitaries, such as Russian Foreign Minister Sergei Lavrov, spoke of the threat posed to Russia by the alleged American military biolaboratories in Ukraine

This is Russian Foreign Minister Sergei Lavrov directly repeating this conspiracy theory, claiming (per translation) America "built two biological war labs, and they have been developing pathogens there, in Kyiv and in Odessa." pic.twitter.com/KDk33rP4Gd

Putin reintroduced this accusation yesterday by explaining that “(the Anglo-Saxons) call noble medical research orders and threats that they give, to their Euroatlantic vassals, to work on the creation of biological weapons using human test subjects, as in Ukraine”.

“Q,” his followers, and American far-right commentators have also been extremely vocal about it. It is even one of the major conspiracy theories used to justify Russian aggression in Ukraine.

If you thought Russian propaganda was ever “sophisticated,” I hate to break it to you: it was always quite stupid. Still is. Here is their latest gem: Hunter Biden funded bio-labs in Ukraine. Handcrafted for Fox News. pic.twitter.com/rZBnGj8W81

Then the American presenter Tucker Carlson comes into play. Hosting Tucker Carlson Tonight on Fox News, the most-watched show on American cable, “Tucker” has repeatedly echoed this argument. The angle was surprisingly favorable to Russia.

Tucker Carlson cites reporting by The National Pulse saying that a private equity firm run by Hunter Biden funded some of the research in Ukrainian biolabs. pic.twitter.com/gvYiPqSUyl

Many experts agree that this claim is false. Yes, laboratories existed, but these were only used to dismantle the old chemical weapons of the USSR, old “Manhattan Project” Russian version.

Tucker Carlson questions what happened to the Nord Stream pipeline:

"Did the Biden administration really do this?" pic.twitter.com/WnBw89L3gV

In this video extract, the presenter explains that the US government could have played a role in the damage to the Nord Stream gas pipelines. Of course, Russian state television was not shy about echoing Carlson's words.

Meanwhile in Russia: every state TV program is feasting on Tucker Carlson's accusations that the Biden administration is somehow involved in causing the Nord Stream damage. Military expert loved Tucker's idea about cutting underwater internet cables & said, "Sure, why not?" Watch: pic.twitter.com/bDVwl2Z7yN

Then comes the logical sequence by Vladimir Putin. This September 30, he affirms that “The sanctions were not enough for the Anglo-Saxons: they went to sabotage. It's hard to believe, but it is a fact that they engineered the explosions on the international Nord Stream gas pipelines.”

As a reminder, more and more evidence is accumulating pointing to the origins of this sabotage.

At the end of the speech, Mr. Putin signed the documents for the annexation of the 4 Ukrainian regions of Donetsk, Luhansk, Kherson and Zaporizhya. While the correlations between the conspiratorial discourse in our lands and the official Russian discourse raise the question of who inspires whom, potential Russian war crimes continue to accumulate as the Ukrainian counter-offensive reconquers new strategic points.< /p>